By Dan Collyns in La Paz

Bolivia’s controversial new interim president has unveiled a new cabinet which critics say could further increase polarization in the country still deeply split over the ousting of her predecessor, Evo Morales.

To the applause of military top brass, lawmakers and senators, Jeanine Áñez vowed to “reconstruct democracy” and “pacify the country” at a late-night ceremony in the “Palacio Quemado” (Burnt Palace) presidential building.

“We want to be a democratic tool of inclusion and unity,” said the 52-year-old religious conservative, sitting at a table bearing a huge open Bible and crucifix.

But the transitional cabinet initially sworn into office on Wednesday night did not include a single indigenous person, in a country where at least 40% of the population belongs to one of 36 indigenous groups.

Several more ministers were sworn in at a second ceremony on Thursday, including Martha Yujra Apaza, wearing the traditional pollera skirt, as culture and tourism minister.

“It’s important to preserve our cultural practices of our Bolivian people, because they enrich the national identity,” she said.

“Bolivia cannot continue revolving around a tyrant,” Áñez added, in a remark directed at her predecessor, who flew into exile in Mexico on Monday and has since questioned the legitimacy of his temporary successor.

Morales resigned under pressure on Sunday after a tumultuous 48 hours in which police officers mutinied, a damning audit by the Organization of American States found electoral irregularities and the military command urged him him to quit.

Áñez has called for fresh elections but has not yet set the date for the vote, which under the constitution she must do within 90 days.

Speaking in Mexico City on Wednesday, Morales hinted that he might return to Bolivia, but Áñez made clear that he would not be allowed to run again.

“Evo Morales does not qualify to run for a fourth term. It’s because [he did] that we’ve had all this convulsion, and because of this that so many Bolivians have been demonstrating in the streets,” she said.

The former leader’s supporters have decried heavy-handed policing in street protests and say they are being targeted for being indigenous in appearance or dress. On Wednesday, the former senate head Adriana Salvatierra, a Morales loyalist who resigned just after he did, was prevented from entering the parliament building by police who scuffled with her supporters.

Áñez’s choice of cabinet showed no signs that she intended to reach across the country’s deep political and ethnic divide. Her senior ministers includes prominent members of the business elite from Santa Cruz, Bolivia’s most populous city and a bastion of opposition to Evo Morales.

Marking distance from Morales’s “21st-century socialism”, the newly appointed foreign minister, Karen Longaric, said: “We leave behind those times in which ethnic and class resentments which divide Bolivians are used as an instrument of political control.”

Such comments were an implicit attack on Bolivia’s first president from its indigenous population, who changed the constitution in 2009 to redefine the country as a “plurinational” state which enshrined the expanded territorial rights of indigenous people.

The perceived disrespect of indigenous symbols has also whipped up outrage among Morales supporters in Bolivia and across Latin America. Social media videos showing the burning of the Wiphala – the multi-coloured flag of native people of the Andes closely associated with Morales’s legacy – has brought thousands on to the streets waving the banner.

One police chief made a public apology after another video showed officers cutting the flag out of their uniforms.

Áñez herself has drawn criticism after racist remarks against indigenous people were unearthed in tweets attributed to her from 2013.

“This is definitely an anti-indigenous government,” said María Galindo, founder of the Mujer Creando feminist movement. “It’s not just racism but also the issue of the plurinational state,” she said.

But Galindo, a fierce critic of Morales, was most worried by the power vacuum the leftwing icon left behind. “The right has filled the gigantic void in a chilling and dangerous way,” she said.

Yerko Ihlik, a political commentator, said Añez would be best advised to stick to the job of creating the conditions for fresh elections. She received a fresh boost on Thursday when Russia – which had been a key ally for Morales – recognized her as interim president.

Related: Many wanted Morales out. But what happened in Bolivia was a military coup | Gabriel Hetland

But there are signs other unelected figures are exerting influence. Luis Fernando Camacho, a self-styled civic leader who has gained increasing prominence as a Morales opponent, entered the presidential palace with followers and then emerged to declare that “the Bible has re-entered the palace”.

His right-hand man, Jerjes Justiniano, was selected as a minister of the presidency on Wednesday.

As Áñez swore in her cabinet, a heavy police presence had quelled protests in the city’s downtown. But the former president’s supporters flooded into the streets of La Paz’s sister city of El Alto, chanting, “Now, civil war!”

“Nobody elected her,” said Jim Shultz, founder and executive director of the Democracy Centre who lived in Bolivia for 19 years.

“If Bolivians who supported Evo – and there’s a lot of them – think that, somehow, without any victory in the ballot box, the right is getting back into power, then that is going to inflame divisions.” 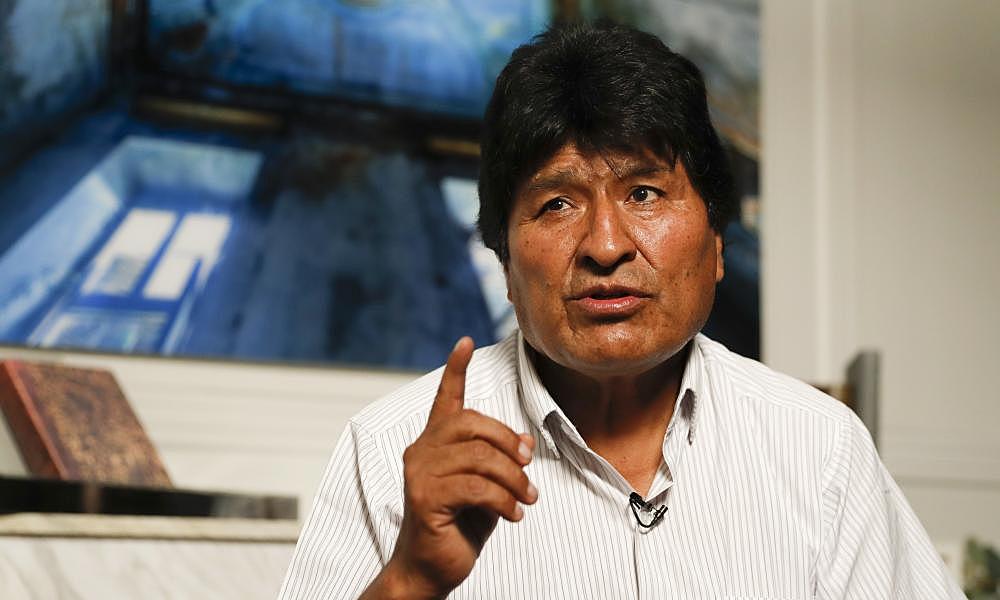 Evo Morales: indigenous leader who changed Bolivia but stayed too long
The son of llama herders was a coca farmer before transforming his country during 14 years in office but his…

La Paz (AFP) - Thousands of demonstrators marched through La Paz on Thursday, piling pressure on the government of interim…

AFP
Bolivia crisis: how did we get here and what happens next?

A disputed election, a deposed president and widespread street protests have left the country in turmoil