La Paz (AFP) - A senator proclaimed herself Bolivia's interim president Tuesday in an effort to fill the power vacuum left by the abrupt resignation of Evo Morales, who immediately condemned the move as a "sneaky coup."

Lawmakers had been summoned to formalize the resignation and confirm deputy Senate speaker Jeanine Anez, 52, as interim president.

Instead, Anez declared herself interim president when the session failed to reach a quorum of lawmakers, many staying away amid blockades and continuing protests by Morales supporters.

"We want to call new elections as soon as possible," Anez said in a speech to Congress, with only Morales opponents present.

"It's a commitment we have made to the country and of course, we will fulfill it," she said.

Later, clutching a bible and wearing the presidential sash over her black jacket, the senator addressed supporters from the balcony of the government palace.

Anez said earlier she was confident that enough senators would reach the Senate to form a quorum -- 19 of the 36 were needed to do so.

Tweeting from exile in Mexico, Morales immediately condemned what he called "the sneakiest, most nefarious coup in history."

Morales called Anez "a coup-mongering right-wing senator" and said she had "declared herself...interim president without a legislative quorum, surrounded by a group of accomplices."

Leaders of the biggest party, Morales' Movement for Socialism (MAS), had requested guarantees to be able to attend the session, but stayed away.

Carlos Mesa, the centrist candidate defeated by Morales in the tainted October 20 presidential elections, tweeted his congratulations to Anez, who has promised a new government would be installed by January 22.

Morales resigned after losing the support of the security forces, leaving the country suddenly rudderless.Dozens of officials and ministers also stepped down, some seeking refuge in foreign embassies.

Anez found herself next in line to take over after the resignations of vice president Alvaro Garcia Linera, the Senate president, and the speaker of the lower house of Congress.

Earlier Tuesday, Morales vowed to continue "the struggle" after arriving in Mexico where he has been granted political asylum.

Morales thanked left-wing ally and Mexico President Andres Manuel Lopez Obrador, saying "he saved my life," and vowed to remain in politics despite having left his homeland.

Grinning and waving as he left the Mexican military plane that had picked him up from Bolivia late on Monday night, Morales was welcomed by Foreign Minister Marcelo Ebrard.

On Monday, the armed forces pledged to help police take back the streets from violent groups that have wreaked havoc since the controversial October 20 election that saw Morales win an unconstitutional fourth term.

Security forces deployed in La Paz on Tuesday, where Morales supporters marched through the center to congregate in San Francisco Square near the Congress.

Bolivia's attorney general, Juan Lanchipa, said Tuesday that seven people have died in unrest since the election, raising the previous toll of three.

The United States meanwhile warned its citizens against travel to Bolivia, ordered its diplomats' family members to leave and authorized non-emergency employees to depart due to the unrest.

Morales, 60, a former coca farmer who was Bolivia's first indigenous president, said his opposition rivals, Mesa and Luis Fernando Camacho, "will go down in history as racists and coup plotters."

He was Latin America's longest-serving leader until Sunday.

Morales had initially tried to hold onto power and call new elections following an Organization of American States audit that found "irregularities" in virtually every area reviewed and questioned "the integrity of the election results." 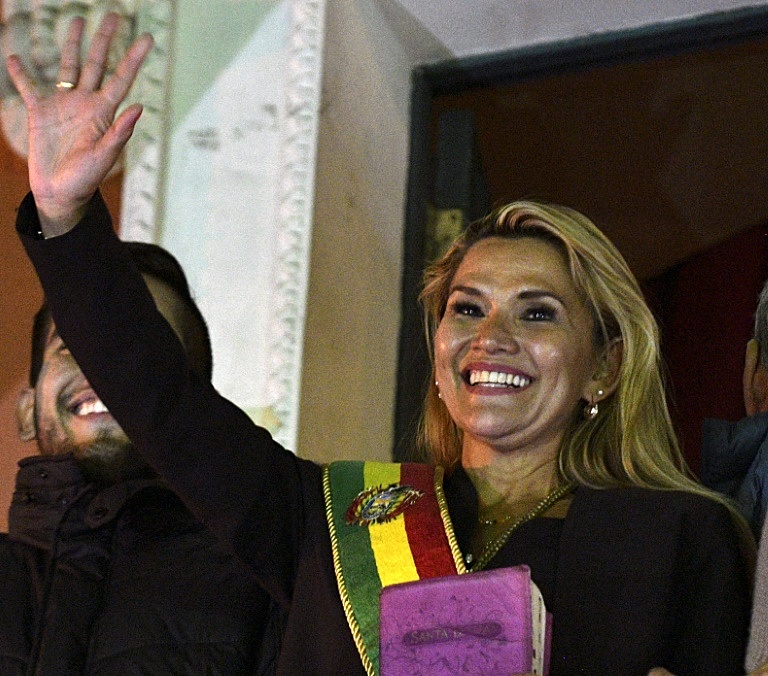 AFP
One subscription that gives you access to news from hundreds of sites
Bolivia faces power vacuum and more chaos after Morales quits
BOGOTA, Colombia _ Bolivia is in chaos after another night of arson attacks and clashes as the resignation of President…