Anez was expected to complete her government line-up, having named new military chiefs and half of her proposed 20-member cabinet -- including Defense Minister Fernando Lopez Julio -- the night before.

"We have come to pacify the country," Lopez Julio said in a speech at the military college in La Paz.

"Above all, we will have to have faith in God," he said, highlighting the conservative Christian emphasis of the new government after Anez had set the tone by brandishing a bible when she assumed office on Tuesday.

Anez swore herself in as president on Tuesday after Morales fled the country, fearing for his safety amid deadly protests.

Unrest erupted when he was accused of rigging the results of October 20 polls to gain re-election for a fourth term.

Normal business resumed in the main cities after weeks of deadly protests, but schools and universities remained shut due to the continued threat of demonstrations.Many gas stations remained closed because of a lack of supplies.

Nearly a month of protests have left 10 people dead and nearly 400 injured.

Riot police had clashed with hundreds of Morales supporters the night before during a demonstration against Anez, who Morales accused of carrying out a "coup."

Morales has kept up attacks on the new government via Twitter from his exile in Mexico.

Anez told reporters Thursday that new Foreign Minister Karen Longari would "make representations" to Mexico to insist that Morales be held to the terms of his political asylum.

Morales's Movement for Socialism (MAS) party on Thursday accused her of "continuing to incite violence" in the country, which has been in turmoil since Morales's contested re-election.

She wasn't helped by her Interior Minister Arturo Murillo, who announced the government would "hunt down" a former Morales minister, Juan Ramon Quintana, accused of masterminding opposition to Anez.

Quintana "is an animal that feeds of blood," said Murillo, while Anez has publicly insisted there would be no persecution of Morales's inner circle.

The 52-year-old interim leader gave the first indication of her government's foreign policy on Thursday, recognizing Venezuelan opposition leader Juan Guaido as his country's president, a key shift of alliance in the volatile region.

The announcement removes one of Venezuelan President Nicolas Maduro's main allies as he fends off efforts to oust him amid a deadly economic and political crisis.

In Venezuela, Maduro's opponents have branded him a dictator for clinging to office as the country's crisis has worsened over recent years.

Guaido has declared himself Venezuela's rightful president.He has gained the recognition of 50 countries, including the United States, but has so far failed to dislodge Maduro. 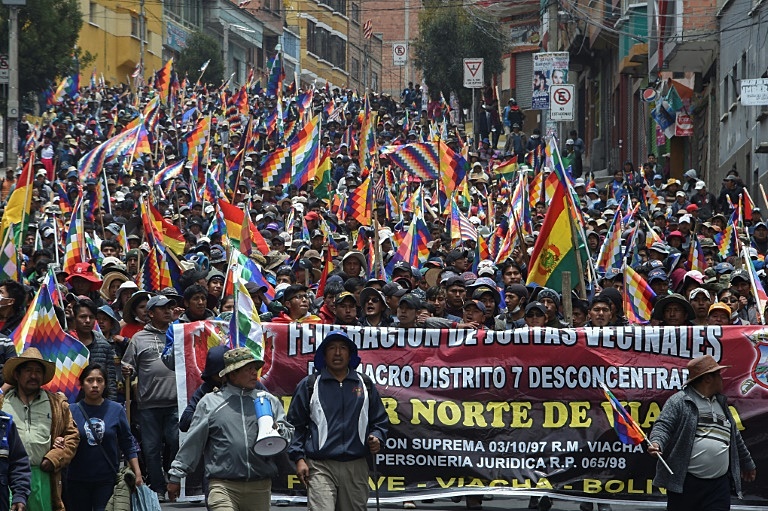 Miami Herald
One subscription that gives you access to news from hundreds of sites
Venezuela protesters march to revive flagging anti-Maduro revolt
CARACAS, Venezuela _ Supporters of Juan Guaido protested in Caracas in their first major showing in months as Venezuela's opposition…