Blood, sweat and happy tears: These are the most wholesome moments of the Tokyo 2020 Olympics

Despite the lead-up being riddled with delays, opposition and disappointment, the Tokyo 2020 Olympic Games have been incredibly wholesome to watch.

When spectators were banned from the Games, there was a fear the event would lose some of its magic without the roar of a crowd.

But instead athletes have cheered each other on, hugged their competitors and created countless moments that made our world feel more connected than it has in a long time.

While every moment of blood, sweat and tears has been beamed into our living rooms, so too have these moments of joy, friendship and solidarity.

Putting aside the medal tally, here are some of the most heartwarming moments of the Tokyo 2020 Olympic Games.

When Italy's Gianmarco Tamberi and Qatar's Mutaz Barshim both cleared 2.37 metres in the men's high jump final, they agreed to share gold.

Their celebrations for joint first place became one of the most memorable displays of sportsmanship in Olympic Games history.

Tamberi leaped into his friend's arms, then belly-flopped onto the hard track and rolled around before screaming with joy.

"This is beyond sport," Barshim said. "This is the message we deliver to the young generation."

The celebrations didn't stop there, with Tamberi again jumping into the arms of Italian sprinter Marcell Jacobs after he won the 100m a few minutes later.

When Peter Bol qualified for the men's 800m final, he became the first Australian to achieve the feat in 53 years.

Back home in West Australia, his family's cheering could probably have been heard in Tokyo.

Bol set an Australian and Oceania record with a time of 1 minute, 44.11 seconds, and captured the hearts of Australians in the process.

The Sudanese immigrant initially settled in Toowoomba before moving to Western Australia on a sports scholarship.

He's become a national hero, most of all to the kids in his hometown.

No one was more surprised than South African swimmer Tatjana Schoenmaker when she stormed her way to a historic win in the women's 200m breaststroke.

She finished her race. She saw her world record-breaking time. Eyes wide, she threw her hands up and screamed.

It was an incredibly heartfelt moment, made only sweeter when her rivals embraced her in a hug.

Team USA's Annie Lazor, who came third, swam over from the next lane and wrapped Schoenmaker in a hug before being joined by fellow American Lilly King and South Africa's Kaylene Corbett.

When Simone Biles pulled out of the team gymnastics finals for mental health reasons, she gave a masterclass in strength and bravery.

With four gold medals at just 24 years of age, Biles is considered the greatest of all time.

But what she's learnt through this experience is arguably more valuable than another medal for the trophy room.

She returned to the stage and claimed bronze in the women's balance beam, with the medal sure to become one of her most significant wins.

British diver Tom Daley went viral when he was spotted knitting by the pool while watching the women's 3m springboard final.

It was only made better when he revealed he was knitting a dog jumper.

Daley, who has an entire Instagram page dedicated to his love for knitting and stitching, also made a cosy for his first ever gold medal to stop it getting scratched.

"The one thing that has kept me sane throughout this whole process is my love for knitting and crochet and all things stitching," Daley said on Instagram.

Patrick Tiernan and not giving up

Patrick Tiernan has been praised by fellow Australians for his courageous and gutsy finish in the men's 10,000m final at the Olympics.

With 180m to go, Tiernan stumbled, before getting back up.

With the finish line in sight, the 26-year-old crashed to the track in exhaustion.

Again, he got up.

"It wasn't graceful, it wasn't pretty, I get disturbed looking at the footage again," Tiernan said.

When Greek pole vaulter Emmanouil Karalis took the stage at the men's final, he had a message to share — literally.

After coming fourth, the 21-year-old pulled out a sign and held it triumphantly in the air.

This is Karalis's first Olympic Games, and while his parents were prevented from cheering on the sidelines due to COVID-19 restrictions, they would have seen his message loud and clear.

The spontaneous ovation for a basketball giant

Applause for Argentina basketball veteran Luis Scola quickly become one of the unexpected highlights of the Tokyo Olympics.

When he went to the bench in the last minute of his losing quarter-final against Australia, an ovation erupted, echoing through the empty stadium.

Both teams and coaching staff simply stood still and applauded, a moving tribute for a man many consider an inspiration.

Andrew Hoy taught us there's no age limit to achieving your dreams.

At 62, he became Australia's oldest Olympic medallist after winning a silver and bronze in the equestrian competition in his eighth Games appearance.

And he's showing no signs of slowing down.

The sportsmanship of our skateboarders

History was made when Japan's Sakura Yosozumi won the first ever Olympic gold medal in women's park skateboarding.

But the way these young women and girls supported each other, it was clear everyone was a champion.

With their ages ranging from 12 to 19, what they lack in age they make up for in sportsmanship.

As the next generation rises up, it's obvious the heart of the Olympics is in safe hands. 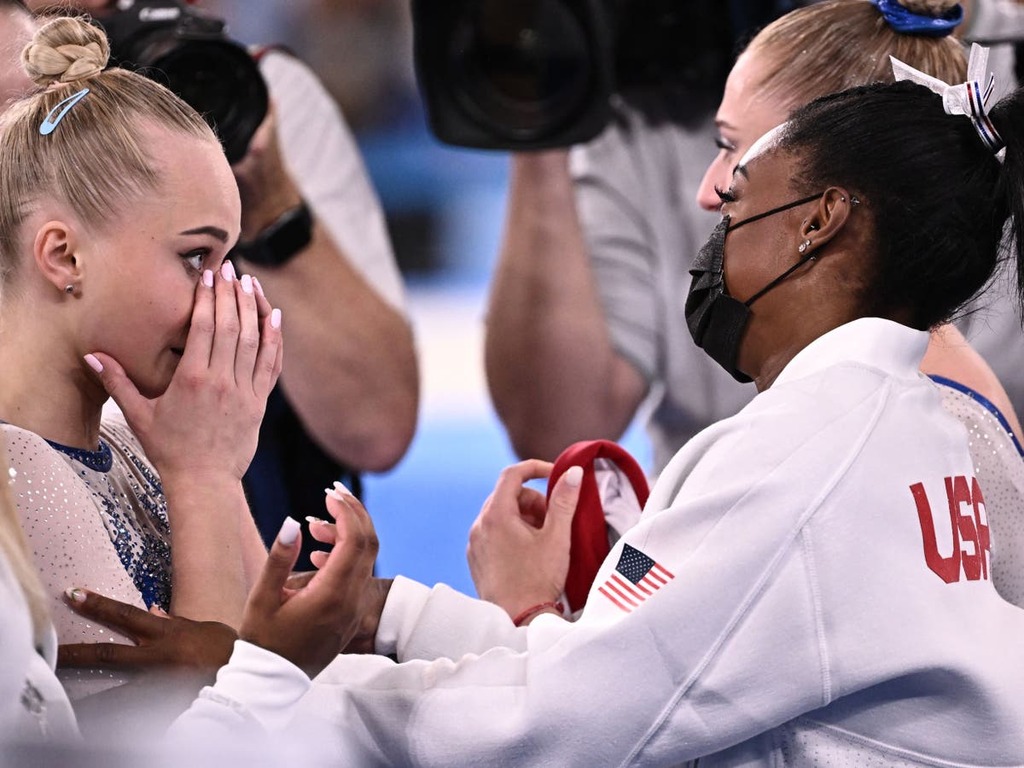 From Tom Daley to Simone Biles: The most heartwarming moments at the Tokyo Olympics
From sharing gold medals to consoling each other after losses, Saman Javed looks at the athletes at this year’s games…

The Independent UK
One subscription that gives you access to news from hundreds of sites
Love, courage and solidarity: 20 essential lessons young athletes taught us this summer

Marcus Rashford, Naomi Osaka, Simone Biles and Tom Daley – from the Euros to Wimbledon to the Olympics, this season’s…