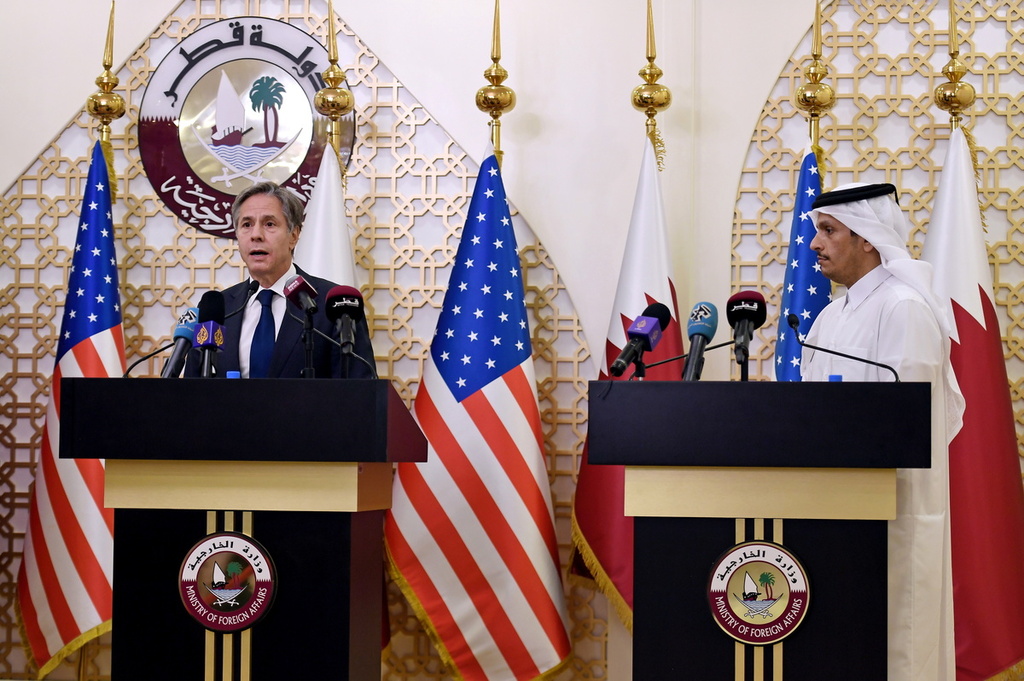 U.S. Secretary of State Antony Blinken denied on Tuesday reports that the Taliban had blocked Americans attempting to fly out of of a northern Afghan city, but said the group had not allowed charter flights to depart because some people lacked valid travel documents.

Reports have emerged over the past few days that 1,000 people, including Americans, had been stuck at Mazar-i-Sharif airport for days awaiting clearance for their charter flights to leave.

One organizer blamed the delay on the State Department, a criticism echoed by some Republicans who have called on the Department to do more to facilitate the charter flights.

Blinken was speaking at a news conference in Qatar, a U.S. ally that has emerged as a key interlocutor to the Taliban, which seized power in Kabul on Aug. 15 after the Western-backed government collapsed.

Blinken said Washington had identified a "relatively" small number of Americans seeking to depart from Mazar-i-Sharif.

But one of the main challenges around the charter flights attempting to depart was that some people lacked the valid travel documents which effectively blocked the departure of the entire group, he said.

"And it's my understanding is that the Taliban has not denied exit to anyone holding a valid document, but they have said those without valid documents, at this point, can't leave," Blinken said.

"Because all of these people are grouped together, that's meant that flights have not been allowed to go," he said.

The confusion was the latest flashpoint following a chaotic U.S. military withdrawal completed after Taliban Islamist insurgents seized power. The United States completed its withdrawal a week ago after a huge airlift.

Blinken added that the Taliban were upholding their commitment to allow Americans with valid travel documents to leave.

"We are not aware of anyone being held on an aircraft or any hostage like situation at Mazar-i-Sharif. So we have to work through the different requirements and that's exactly what we are doing," he said.

"A LOT OF ISSUES TO WORK THROUGH"

On Sunday, the senior Republican on the U.S. House of Representatives Foreign Affairs Committee, Mike McCaul, told "Fox News Sunday" that six airplanes were stuck at Mazar-i-Sharif airport with Americans and Afghan interpreters aboard, unable to take off as they had not received Taliban clearance.

He said the Taliban were holding passengers "hostage for demands".

Noting that there were no longer any U.S. personnel on the ground in Afghanistan, whether in Kabul or Mazar-i-Sharif, Blinken said the United States had no means to verify the accuracy of passenger manifests, among other issues.

"These raise real concerns. But we are working through each and every one in close coordination with the various initiatives and charter flights that are seeking to evacuate people," he said. "But I just want to emphasize that there are a lot of issues to work through."

Speaking alongside Blinken, Qatar's Foreign Minister Sheikh Mohammed bin Abdulrahman Al Thani said his country hoped Kabul airport would be up and running for passengers in the next few days, but no agreement on how to run it had yet been reached.

Turkey is working with Qatar to restore passenger flights at Kabul airport. Both countries have technical teams at the airport and Qatar is chartering near daily humanitarian flights following the U.S. withdrawal, Sheikh Mohammed said.