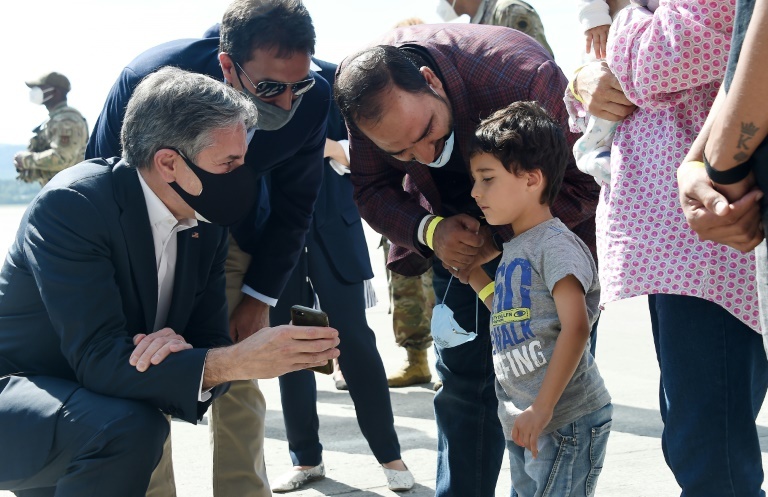 Ramstein (Germany) (AFP) - US Secretary of State Antony Blinken was looking Wednesday to build a united front with nations shaken by the Afghanistan withdrawal as he consulted allies and heard stories from refugees at an air base in Germany.

Ramstein is the second base visit in as many days by Blinken, who toured Qatar on Tuesday, as he offered thanks to US civilian and military officials behind one of history's largest airlifts as Afghanistan fell to the Taliban.

From the base, Blinken began his talks with German Foreign Minister Heiko Maas before they lead a 20-nation virtual meeting of ministers on the way forward in Afghanistan.

At the entrance to a vast hangar where some of the 11,000 Afghans at Ramstein are awaiting flights to the United States, Blinken crouched down and showed photos on his telephone of his own children to the toddler son of Mustafa Mohammadi, an Afghan military veteran who worked with the US embassy turned refugee.

Blinken, the stepson of a Holocaust survivor and longtime advocate for refugees, also toured a makeshift home for some of the children who have lost their parents.

"My name is Tony," he said."Who's playing volleyball?What about football?"

"Many, many, many Americans are really looking forward to welcoming you and having you come to the United States," he said.

Artwork by the children included a picture of a girl on a cliff beneath a deep-blue sky with a broken heart and a message in English, "Say to my Mom I miss you."

One boy presented Blinken with a T-shirt with the children's names, an Afghan flag and an inscription "For Sir Blinken."

"I will wear this in Washington and be able to tell everyone where I got it," he said to their laughter.

The United States and its allies evacuated some 123,000 people, mostly Afghans who fear Taliban retribution, in the final days of the 20-year US war that President Joe Biden ended last month.

But US officials acknowledge that many more remain and say that the Taliban have agreed to let them leave.

In the virtual talks with 20 other nations including European allies, Blinken is likely to seek to shore up international pressure on the Taliban to make good on their promises.

The talks could also bring coordination on how to deal with the caretaker government announced Tuesday, which has no women or non-Taliban members and includes an interior minister who the United States is seeking to arrest on terrorism accusations.

The United States said it was "concerned" by the makeup of the government, but would judge it by its actions.US officials have stressed that any official recognition of a Taliban government is far off.

Maas said the goal of Wednesday's meeting was "to clarify what a joint approach towards the Taliban can look like".

"The people of Afghanistan are not to blame for the Taliban coming to power.And they do not deserve to have the international community turn away now," Maas said in a statement.

Germany, like many US allies, had celebrated Biden's victory over Donald Trump and the new administration's stated emphasis on working with the rest of the world.

But even some close allies have been critical over how Biden ended the 20-year war in Afghanistan, which led to the Western-backed government crumbling within days.

Armin Laschet, the leader of German Chancellor Angela Merkel's ruling party and candidate to succeed her, described the Afghanistan mission as "the biggest debacle" in NATO's history.

Biden has long favoured pulling out of Afghanistan, arguing that the US-led NATO mission had achieved its core goal of accountability for the September 11 attacks 20 years ago this week and that the United States should not invest further blood or treasure in propping up a weak government.