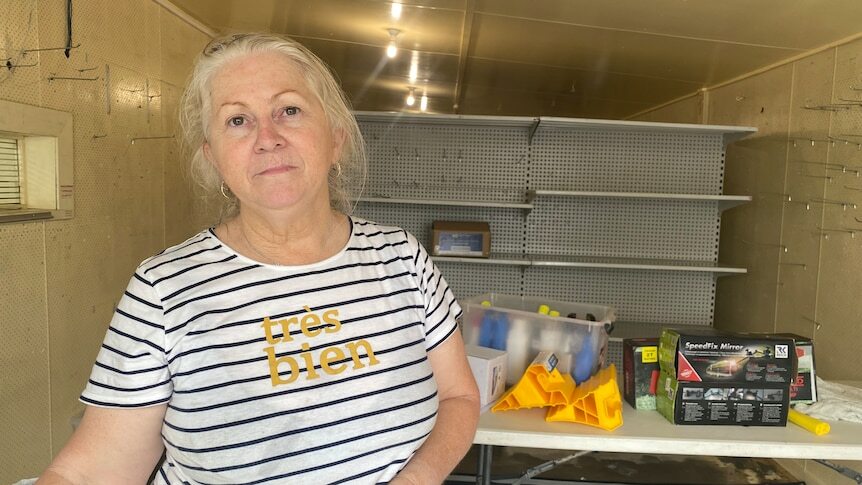 Floodwaters cut Bruce Highway at Gympie, as low-lying business owners evacuate
As the Queensland town is isolated by floodwaters for the third time since January, residents and main street business owners…

Victims of the devastating February floods in south-east Queensland say the latest severe rain event has triggered trauma, as a…

Residents in a Noosa hinterland town isolated by floodwaters are risking their safety by walking alongside a 150-metre landslide to access food and medical supplies, as the region cops more significant rainfall.

Black Mountain residents have been reliant on a flood-prone dirt road to access their homes after the main route was destroyed during a landslide in late February, but on Tuesday floodwaters cut the only remaining alternative.

Resident Tabatha Harvey said she had carried her young son across the landslide to get home from hospital in Brisbane on Tuesday night.

"I had to end up parking on the Cooroy side of our landslide and getting JP to meet me over the other side to carry Blake over the mud with a torch," Ms Harvey said.

"We don't have any other option if you need to get out of town. That's your only way out."

It is not the first time Ms Harvey has had to cross the landslide.

Last week she carried Blake across the destroyed road to an ambulance to save paramedics taking a 30-minute detour after he sustained significant burns to 19 per cent of his body.

Blake now needs to visit hospital twice a week for doctors to replace his dressings, but with no road out his appointments and access to emergency medical attention is uncertain.

"I'm a bit worried and scared because if anything happens, like Blake can easily get an infection, he can go down really quickly," Ms Harvey said.

"Starting over the next few days, material and machinery will be on site to complete the work subject to weather," he said.

"In regards to the landslip works, our geotechnical experts have needed to do further investigations to get greater clarity on the extent of the damage and how best to rectify the situation."

Mr Sengstock said once the weather subsided, the council would add gravel to the dirt track residents were using to walk alongside the landslide.

In the meantime, tensions are building on the mountain as residents fear they will have no access to emergency assistance.

For resident Phil Broad, who has quadriplegia, the price of being isolated from medical help is costly.

He said last time he was isolated from his carers for four days, he had to have the bottom part of his leg amputated due to a pressure wound.

"They do bowel treatment, they shower me, put me in my wheelchair and as a result of that not happening, I get pressure wounds," Mr Broad said.

"Now because the stump below my knee is in such a bad position, it's pressurised still, so they're going to have to go just above my knee now to rectify the problem.

"It's a bit frightening because if I have a problem, which I have in the past, with catheters and such, the ambulances won't be able to come to take me to the hospital if something happens.

"It probably won't be [until] late Saturday the carers are able to get here."

Resident Andrea Pall said her partner crossed the landslide on Wednesday morning to catch a taxi to buy food, after finishing one week of home isolation due to COVID.

"It's frightening because he can slip but what else do you do?" Ms Pall said.

In March, the Noosa council said repairs to Black Mountain Road could take six months, but with more rainfall on the way residents are doubtful.

"It's very depressing to look at it because you know that is not going to be fixed for a long time," Ms Pall said.

She said communications from all levels of government had been limited.

"I'm absolutely devastated. I don't know who to turn to anymore. Thank God there are some good people up in Black Mountain."

Floodwaters cut Bruce Highway at Gympie, as low-lying business owners evacuate
As the Queensland town is isolated by floodwaters for the third time since January, residents and main street business owners…

Victims of the devastating February floods in south-east Queensland say the latest severe rain event has triggered trauma, as a…