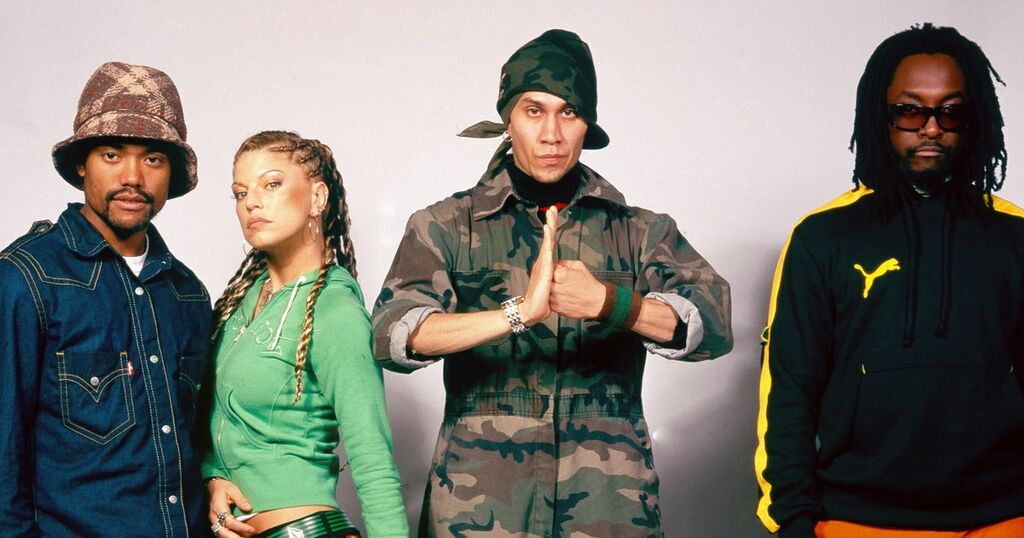 The Black Eyed Peas' 2003 smash hit Where is the Love touched hearts around the world and threw the foursome into the public spotlight as one of the biggest bands of the year.

But the band actually began way back in 1988, when William Adams, whose stage name was will.i.am, met Allan Pineda Lindo, who went by apl.de.ap, when they were schoolchildren.

They created a breakdancing crew which then turned into a rap duo and soon caught the eye of N.W.A star Eazy-E, who signed them to his Ruthless Records label.

Eazy-E died from AIDS in 1995, and around the same time, will.i.am and apl.de.ap recruited Taboo and singer Kim Hill and they became The Black Eyed Peas, with Sierra Swan also joining in 1998.

In 2000, Kim and Sierra quit the band and two years later, Stacey Ferguson, known as Fergie, joined after splitting from her first band, Wild Orchid. Nicole Scherzinger was approached first but had conflicting contractual obligations with her band, Eden's Crush.

The rest was history and the band topped the charts all over the world, selling more than 80million records, making them one of the most successful groups of all time.

The Black Eyed Peas took a five-year hiatus in 2011 before returning with their new album.

In 2017, rumours began swirling that Fergie was leaving the band but will.i.am dismissed them. However he eventually confirmed she was taking a break in order to focus on her second solo album, Double Dutchess, and confirmed she didn't feature on their single Street Livin'.

Shortly afterwards, a new Black Eyed Pea joined the band in the form of Jessica Reynoso , known as J. Rey Soul, who had starred on The Voice of the Philippines. The group have continued to make music since, albeit with less success than in their earlier years, with Jessica joining their world tour in 2019.

It was only in 2020 at the MTV Awards that many fans realised Fergie had left, as the band had been so under-the-radar before performing with its new line-up.

Twitter went wild as many users asked where Fergie was and bemoaned the fact she had been replaced.

But what are the members of The Black Eyed Peas doing now?

Will has landed a major role on primetime UK television as a mentor on The Voice alongside Tom Jones, Danny Fletcher and Pixie Lott, with previous mentors also including Paloma Faith and Danny O'Donoghue.

The 46-year-old has also worked as a music producer for stars including Cheryl, Michael Jackson, Lady Gaga and Britney Spears - with whom he had the single Scream & Shout.

As well as mentoring stars on The Voice UK, he has also appeared on The Voice Australia and The Voice Kids, briefly retiring from releasing music but then returning - and thought to be worth a whopping £60million these days.

His song Reach for the Stars was the first ever to be broadcast from Mars, and he listened to it with a live audience at NASA in California when the space mission had finished.

He has released four solo albums as well as his own Smartwatch and glasses range, and appeared on a collaborative single featuring celebrities including Bono and Jennifer Hudson at the start of the pandemic, called Sing for Life.

Will has branched out into acting with roles in Madagascar: Escape 2 Africa, X-Men Origins: Wolverine, the prequel to the Wolverine films, and Rio and Rio 2.

He also briefly played himself in the Tina Fey and Steve Carell comedy film Date Night, and has written a book called WaR: Wizards and Robots.

Will keeps his personal life fiercely private, though he has opened up about living with tinnitus, and says he follows a vegan diet.

It was reported in 2008 that he had dated Australian popstar Natalie Inbruglia, and in 2014 Will was linked to UK reality television star Casey Batchelor, though he never confirmed their romance.

"I don't have time for girlfriends, and that's why I just keep busy," he told The Mirror.

"I keep going because that's what I want to do."

His documentary, Will.i.am: The Blackprint, airs on ITV on Thursday as the musician explores what it means to be Black and British.

Fergie had major success with her solo career during and after her time in The Black Eyed Peas.

She embarked on a film career, starring in flicks including Poseidon, Grindhouse, and Nine.

An unfortunate rendition of The Star Spangled Banner at a 2018 NBA game sparked controversy as it was ranked in lists of the worst renditions of the song of all time.

"I love this country and honestly tried my best."

Fergie began dating Josh Duhamel in 2004, after they met when she and the Black Eyed Peas filmed a cameo for an episode of his show Las Vegas.

Fergie and Josh got engaged in December 2007, and they married in a Catholic ceremony on January 10, 2009.

They have one son, Axl Jack Duhamel, born on August 29, 2013, and his birth inspired Fergie's single M.I.L.F $, the raunchy video for which featured famous mums including Chrissy Teigen and Kim Kardashian dressed as 1950s housewives.

Axl was also the reason Will gave for Fergie, 46, leaving the Black Eyed Peas, explaining that she wanted to "focus on being a mum".

"That's a hard job, and that's what she really wants to do and we're here for her," he said.

"It's really the way Fergie designed it, so we're respecting her design. We love Fergie, and we don't want anything but awesomeness for her."

Fergie and Josh announced that they had separated in 2017, and two years later they filed for divorce officially and it was finalised soon after.

Jaime Luis Gomez, who uses the stage name Taboo, began making his solo album in 2008, but in 2011 he admitted it would be some time before it was released.

But music he co-wrote and performed has featured on a number of films including Coach Carter and Legally Blonde.

The 46-year-old has had acting roles in films, including Dirty, with Wyclef Jean, and Cosmic Radui, and also appeared as a judge on the reality competition show MTV's Top Pop Group.

In 2008, Taboo married his wife, Filipina Jaymie Dizon, and they welcomed their first child, Jimmy Jalen Gomez, in July, 2009 and their second, Journey, in April 2011.

In May 2014, Taboo released his solo single, Zumbao, which he said was "all about having fun and being infected by positive energy".

Just one month later, Taboo was diagnosed with stage 2 testicular cancer after going to hospital due to what he thought was the flu.

He had broken his tailbone after falling on stage during a performance, and was left with permanent back pain which began to worsen.

"The pain started getting stronger and stronger every year," he told Coping.

"But I never went to a doctor to see what it was."

But the pain got so unbearable that Taboo eventually went to get an MRI, CAT scans, and blood work, and he was told he had cancer which had spread from his right testicle to two lymph nodes in his spine.

The years of pain that Taboo thought was related to his broken tailbone had actually been caused by his growing tumour.

He had surgery to remove the cancerous testicle the next day, and then embarked on 12 weeks of aggressive chemotherapy, which he said was absolutely agonising.

"Everything was back to back," he said. "There was no time to react. We just had to go with it."

The hardest part of it all, said Taboo, was that he struggled to play with his young children because he was so tired and in pain.

"When I was doing chemotherapy, there were times when I’d be tired and I wasn’t able to do things like run in the backyard with my kids or play with them. And I’m a very affectionate father. I love to be with my kids," he said.

He had been told that after his treatment he was unlikely to be able to have any more children - but incredibly he and Filipina welcomed their "miracle baby" Jett Juliana in 2015.

In 2016, Taboo released his song The Fight about his cancer battle, and became an ambassador for the American Cancer Society.

In 2021, he wrote a children's book called A Kids Book About Identity, in the hopes of empowering children to believe in themselves no matter who they are.

"I had a long journey of educating myself and learning about both of my cultures, both being rooted in an Indigenous ancestry of course," Taboo said.

"For me, when I fully understood and embraced my identity was after I survived my battle against cancer."

Allan Pineda Lindo, or apl.de.ap, initially came to the United States at the age of 14 for treatment for nystagmus, an involuntary movement of the eyes, but loved it so much he convinced his mother to move there.

The 46-year-old revealed to PEOPLE in 2011 that he was legally blind in both of his eyes, but the following year he had life-changing surgery that corrected his vision.

An emotional apl.de.ap hugged his mother as he woke up from the operation and confirmed "the fuzziness has already gone away".

One week later, he was reporting even more progress, explaining: " I can see a lot more details in faces.

"I can actually see people from a distance now. I can see almost 100 feet away, before I couldn't see that."

In 2011, apl.d.ap launched his new advocacy campaign with a song called We Can Be Anything, to help encourage children in his native Philippines and around the world to stay in school.

He also pledged to help build 10,000 classrooms in two years in the Philippines.

In 2013, apl.de.ap was confirmed to be one of the four coaches of the first season of The Voice of the Philippines, and he released some solo material including the song Be, with J. Rey Soul.

Apl had six younger siblings, but sadly one of his brothers took his own life, while the youngest was murdered in 2009, aged just 22.