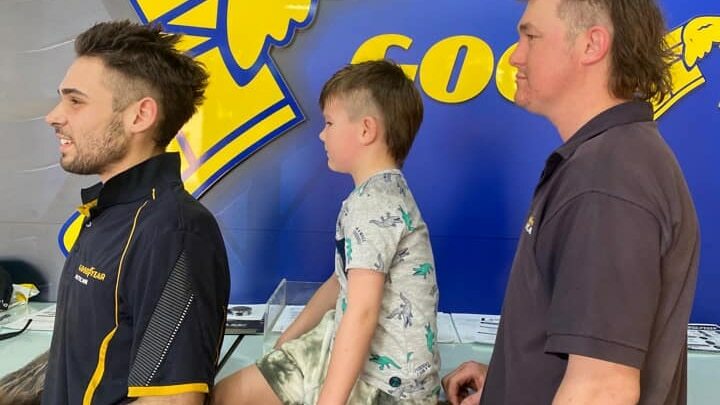 People are showing off their mullets. But, for some, it is more than just a haircut this month.

Working for infrastructure company Fulton Hogan, the 36-year-old said he had seen people suffer from mental illness in the construction industry and in his social circle.

"There's definitely a culture change, people are opening up to talk about it," he said.

He described his mullet as "not too outrageous".

"It's pretty grey and balding, I'm enjoying it."

For the fundraising effort, his workmates have joined him in attempting the resurgent hairstyle.

"A lot of the teams have taken a moment to stop and have a morning tea and have a discussion about mental health."

Fundraising grows as fast as the hair

With 2,056 Victorians taking part in Mullets for Mental Health, the campaign has already raised $5 million for research and suicide prevention.

Suicide is the leading cause of death among Australians aged 15–44, and around 60 per cent of Australians reporting symptoms of mental illness do not seek help.

"Forty-five per cent of all Australians will experience a mental illness in their lifetime," he said.

"The funds raised will support future research projects like Under the Radar.

"This project specifically aims to understand the complex barriers as to why 50 to 60 per cent of people experiencing suicidal thoughts don't reach out for professional support."

Mr Jackson said the Black Dog Institute was all about research at the front and action at the back.

"By growing a mullet you're helping the Black Dog Institute to grow this particular research project," he said.

A tsunami of mullet photos have taken over the ABC Central Victoria Facebook page.

From purple mullets to VB-inspired buzzcuts, it is clear the mullet is back on trend in regional Victoria.

As for how long the mullets will last?

"I think it'll be chopped off while I'm sleeping come the end of September," Mr Wadell said.