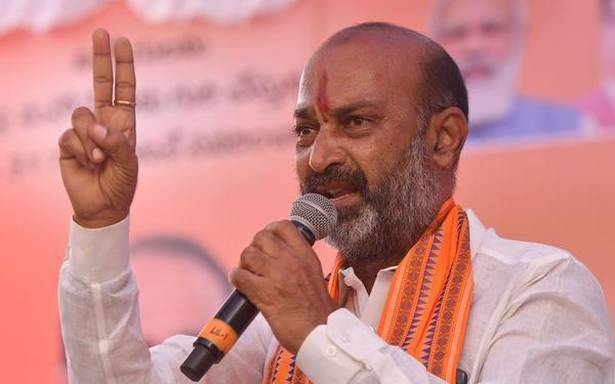 Chief Minister K. Chandrasekhar Rao has once again started planning for the ‘Third Front’ by meeting Left Party and other national leaders and has been talking of Enforcement Directorate and the Central Bureau of Investigation (CBI) raids only to “save himself from prosecution for his corrupt deals”, charged Telangana BJP president and MP Bandi Sanjay Kumar on Tuesday.

“We will not spare Mr. Chandrasekhar Rao, we will probe his corruption and send him behind bars. He was involved in ESI and Sahara cases and the CBI is already probing into them,” he claimed, at a public meeting held in Mahabubnagar in support of the agitating employees against GO 317 zonal transfers.

The BJP leader said the “rubbish” GO has to be put into dustbin for causing so much of distress and divide among the employees yet the Chief Minister does not appear to be in a mood to relent. “He (CM) did not respond when farmers and students were committing suicide, so employees taking the extreme step too is not going to change the heart of this tyrant,” he charged.

Employees and teachers should endure the TRS regime for another two years after which he was sure the BJP will form the government when the transfer orders will be withdrawn. “It will be our first step and justice will be done to the employees, teachers and unemployed youth. We are fighting for your cause, getting thrashed by the police and going to jail so join us in the struggle,” he exhorted them.

Mr. Sanjay Kumar challenged the Chief Minister to explain how many extra acres of agriculture land got water from the irrigation projects taken up after the TRS came to power. The district has been among the neglected ones, he said. The BJP leader also criticised Mr. Chandrasekhar Rao for meeting and dining with CPM and Majlis Party which had opposed the formation of Telangana.

Party vice president D.K. Aruna said none of the pending irrigation projects of the district have been completed by the TRS despite lofty claims. Former minister Eatala Rajender, former MP Jitender Reddy and others also spoke.