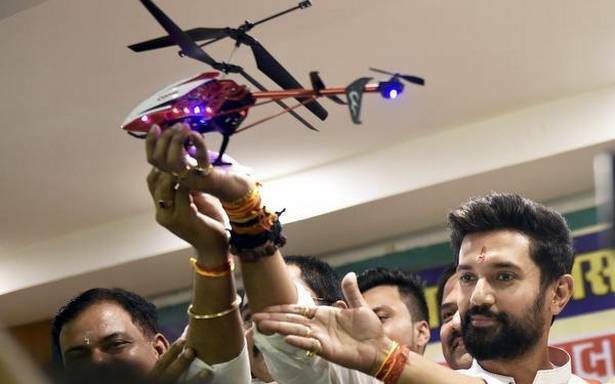 The growing differences between allies Janata Dal-United (JD-U) and the Bharatiya Janata Party (BJP) will force snap polls in Bihar, and the upcoming by-elections for two seats in the State are “merely the semi-final”, Lok Janshakti Party (Ramvilas) leader Chirag Paswan said at a press conference in Delhi.

“Tell me one major policy decision on which JD(U) is ready to support the BJP? Wasn’t Nitish Kumar standing against the CAA (Citizenship Amendment Act)/ NRC (National Register of Citizens)? And now what is happening on the caste census? How long can the two continue with such deep differences? Their differences will certainly lead to mid-term elections,” Mr. Paswan said.

The LJP-R is contesting both the Bihar Assembly seats, Tarapur and Kusheshwarsthan, which are scheduled to go for a by-election on October 30. The seat fell vacant because of the death of sitting JD(U) legislators. The LJP was a poor third in 2020 Assembly elections in both these constituencies.

Notwithstanding past results, Mr. Paswan claimed on Thursday that his party would win both the constituencies. The RLJP is not contesting these elections.

“The 2020 mandate was definitely not for Nitish Kumar. Bihar voters hate Nitish Kumar and his way of governance via select bureaucrats. And I am a 100% sure that in both the seats, the JD(U) will not only lose, it will also be a distant third,” Mr. Paswan said.

Friday is the first death anniversary of his father Ramvilas Paswan. Both the LJP(R) and the RLJP are ready to claim Ramvilas Paswan’s legacy for themselves and have planned events.

Mr. Paswan is expected to hold a puja at the family’s residence at 12, Janpath Road, while Mr. Paras is organising an event in Patna to which he has also invited the Bihar Chief Minister Nitish Kumar.