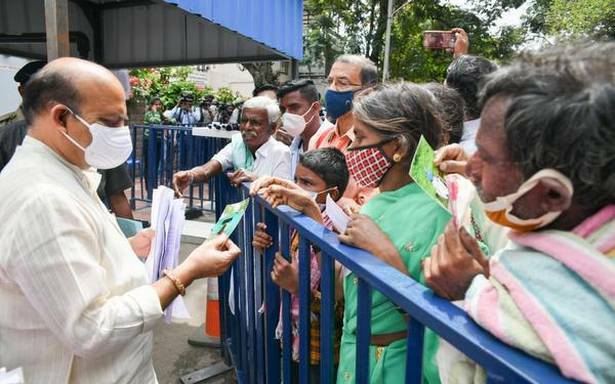 Chief Minister Basavaraj Bommai said the BJP and the Janata Dal (S) will come together to run the Kalaburagi Municipal Corporation.

In the 55-member Kalaburagi Municipal Corporation council, the Congress won in 27 wards, BJP in 23 and JD(S) in 4 while one seat was won by an independent.

Speaking to reporters in Bengaluru on September 7, the Chief Minister said the JD(S) has shown interest to work with the BJP in the Kalaburagi municipal body.

BJP secured a majority in the Belagavi Municipal Corporation while falling short of a clear majority in Hubballi-Dharwad where the party secured 39 seats in the 82-member council.

A few days ago, BJP came to power in the Mysuru City Corporation, for the first time, after the tie-up between JD(S) and Congress, which were in power, fell apart.

The Chief Minister, who left for Delhi on September 7, said he would meet Finance Minister Nirmala Sitharaman, Union Minister for Road Transport and Highways Nitin Gadkari, and other Ministers and urge them to clear pending projects and release funds for various centrally sponsored schemes.

Regarding the four vacancies in the State Cabinet, the Chief Minister said the topic would not come up during this visit to Delhi.

Death due to pothole

On the death of a man on a two-wheeler on account of a pothole in Bengaluru on September 6 night, the Chief Minister said the issue of potholes was discussed during last week’s review meeting. The BBMP Commissioner has been instructed to take up the work of filling potholes on a war footing after the monsoon starts receding, Mr Bommai said.