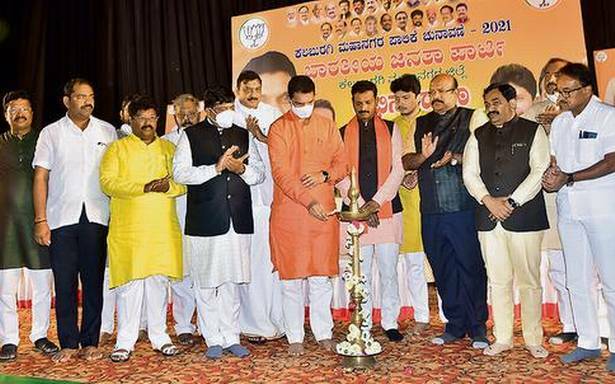 While speculation over who will get the Mayor post in Kalaburagi that saw a hung verdict in the recent city corporation elections continued on Thursday, BJP leaders strongly exuded the confidence that they will land it.

Speaking to mediapersons in Bengaluru, Chief Minister Basavaraj Bommai said talks are on with the Janata Dal (S) whose support will be crucial for the party to reach the magic figure of 32 seats for a simple majority in the corporation council. “Our talks with the JD(S) are in the beginning stage. But, I want to say that the BJP will get the Mayor post,” Mr. Bommai said.

BJP State unit president Nalin Kumar Kateel and vice-president Nirmal Kumar Surana, Large and Medium Industries Minister and Kalaburagi in charge Murugesh Nirani, Sedam MLA Rajkumar Patil Telkur, and other senior leaders spoke on the same lines expressing the confidence that they will land the Mayor post. They were in Kalaburagi on Thursday to participate in the party’s programme to congratulate new members in the civic body and thank people for electing them.

Mr. Kateel even hinted at his party’s readiness to employ tactics required to grab the post.

“The BJP’s efforts to capture power in the city corporation is continuing. For the first time, the BJP has won more seats as the people of Kalaburagi want the BJP to rule the civic body for the sake of development. We will use all possible tactics to get the Mayor post and capture full-fledged power,” Mr. Kateel told reporters.

Expressing his party’s inclination for having a political adjustment for the sake of Kalaburagi’s development, Mr. Surana expressed the confidence that they will get support from the JD(S).

“I am confident that the JD(S) will accept a BJP member as Kalaburagi Mayor and extend its support,” Mr. Surana said.

Mr. Nirani expressed confidence that JD(S) leader H.D. Kumaraswamy will shortly declare his party’s support to the BJP in the corporation.

The JD(S), which has won four seats, had made it clear that it will go with any party that will offer the Mayor post to it. Kedaralingaiah Hiremath, district president of the party, also reiterated the party’s position.

“We want the Mayor post and will go with the party that supports us. There is no change in the party’s stand. Mr. Kumarswamy will announce it within a day or two,” Mr. Hiremath told The Hindu.

Of the 55 wards in the corporation, the Congress has won 27 seats followed by the BJP with 23. There is one Independent member who was earlier denied BJP ticket.