After staring past the dusty veils of the cosmos for 16 years, NASA's Spitzer Space Telescope will shut its proverbial eyes Thursday after mission officials at Jet Propulsion Laboratory send the observatory its final command.

The spacecraft probed some of the earliest-known galaxies in the universe and identified rocky, Earth-sized planets orbiting a nearby star. It has also uncovered hundreds of stellar nurseries, cool stars and objects shrouded by interstellar dust.

Spitzer was one of NASA's four Great Observatories, each tasked with sketching out a view of the universe in a different band of the electromagnetic spectrum. Together, they painted a richer portrait of the cosmos.

For instance, while the Hubble Space Telescope was built to scan the skies primarily for visible and ultraviolet light, Spitzer peered into much longer wavelengths of infrared light. That allowed the telescope to see through the cosmic dust and debris that obscured Hubble's vision.

Thanks to more than 2 million images captured by Spitzer, astronomers have assembled an enormous map of the Milky Way that illuminates its spiral structure and its central bar of aging stars. These observations have helped us better understand our own galactic home.

"It's like being in a forest _ you're surrounded by the trees but you don't know the shape of the forest," said Sean Carey, an astronomer with the Spitzer Science Center at Caltech who has been with the mission since 2002. Without a telescope like Spitzer, it's "really hard to figure that out."

Seeing in the infrared also allows astronomers to peer deeper into the universe's past. That's because as the universe expands, visible light from those early stars gets stretched to longer, redder wavelengths.

Spitzer and Hubble spied a record-breaking galaxy that was 13.4 billion years old, shining just 400 million years after the Big Bang. Together, they revealed that many early galaxies were surprisingly mature for their age _ a sign that star formation began quite soon after the universe's birth.

While Spitzer could see the hidden structures of distant nebula and examine dust-shrouded supermassive black holes, it also found surprises in our own backyard.

In 2009, it spotted a thick ring around Saturn that is 40 times wider than the planet itself. Though it easily dwarfs Saturn, the ring is also diffuse, which may be why it was overlooked for so long until Spitzer spotted its faint, dusty glow.

Spitzer also studied the debris kicked up from the comet Tempel 1 when the Deep Impact spacecraft smashed into it. The results revealed a surprising list of complex ingredients, such as clay and carbonates, that amounted to a recipe for the solar system's "primordial soup." Astronomers believe it may be akin to the recipes for other planetary systems.

And because planets can glow in the infrared, Spitzer could probe the atmospheres of distant worlds. The telescope made it possible for scientists to construct the first "weather map" for a gas giant exoplanet, and to pinpoint the chemical fingerprint of water around others.

Back in the 1980s, Spitzer was originally planned as a multibillion-dollar behemoth, said Michael Werner, the project scientist for the mission. By the time it launched in 2003, the telescope had taken a different form, thanks in part to its elder sibling.

Soon after Hubble began its operations in 1990, engineers realized that a flaw in the mirror design blurred what should have been sparkling-clear images. The mistake made NASA officials skittish about large projects, Werner said.

The Spitzer team responded by paring down the telescope in novel ways. Instead of using a giant tank of cryogen to keep the telescope cold, engineers relied on the passive cooling power of space itself. That saved on both material and launch costs, and set a new precedent for the missions that followed. (A much smaller tank of cryogen kept the infrared instruments cooled to around minus 450 degrees Fahrenheit so that they could take their delicate readings.)

"That sort of put us back on the map," Werner said.

Spitzer's price tag, launch costs included, came in around $776 million. With a reduced budget, Spitzer also had a relatively smaller team. The result was a better integrated group whose members were deeply invested in the project, Carey said.

"You had an opportunity to do a lot of things that you wouldn't normally do as a scientist or an engineer and kind of really expand your horizons," he said.

While the road to launch was "a long struggle," Werner said, the value of having a very cold infrared telescope situated high above the Earth's interfering atmosphere kept the team going. Its 85-centimeter (about 33 inches) mirror would be far more sensitive than a 10-meter (about 10 yards) telescope on the ground.

The scientists and engineers did their best to maximize Spitzer's viewing power. Rather than circling the planet like Hubble, it trailed behind Earth as it traveled around the Sun. This allowed Spitzer to avoid the confounding heat radiation from our home planet and to stare at the stars for far longer periods of time.

These qualities made for an unexpectedly sensitive and stable telescope, which came in handy even after its cryogen ran out in 2009 and two of its three instruments ceased to function.

Spitzer's second act _ the so-called "warm" mission, which was conducted around a balmy minus 405 degrees Fahrenheit _ involved the spacecraft exploring exoplanets with just one working instrument. It was not designed for this, but it adapted beautifully, scientists said.

Spitzer can spot the tiny, periodic dips in brightness of other stars that are caused by a circling planet. In one of its major coups, Spitzer found five of the seven rocky, Earth-sized planets surrounding the ultra-cool dwarf star TRAPPIST-1, three of which lie in the star's habitable zone.

Ironically, the innovative solar orbit that gave Spitzer so many of its advantages also forced an eventual farewell. The spacecraft has fallen farther and farther behind Earth as it circles the sun, making it increasingly difficult to communicate.

NASA extended the life of the mission while its successor, the James Webb Space Telescope, was delayed time and again. But now, even with Webb's launch pushed back to 2021, officials say they've decided to let the spacecraft go. The final command will be sent around 2 p.m. Pacific time, asking the telescope to go into a permanent sleep mode.

Scientists are already mourning the loss.

"I know intellectually it's just a space robot, but he's our space robot," said Luisa Rebull, an astronomer with Caltech-IPAC, which manages NASA's Infrared Science Archive. "I was really glad to have been a part of it."

Carey said he will miss the data that Spitzer won't be collecting.

"I haven't unpacked all my feelings," Carey said. "I think that the capabilities of the observatory are still there."

But it will take years for astronomers to comb through Spitzer's vast trove of archived data, he added, so they'll be making new discoveries for years to come.

Still, letting Spitzer go is hard to do, said JPL's Dave Gallagher, who served as the mission's project manager when it launched.

"It's like losing a child," Gallagher said. "It's a very bittersweet day. You look at the legacy of the mission, but also you get very attached."

At least this isn't a final goodbye. In about 30 years, Earth will catch up to Spitzer from behind, allowing for a temporary reunion, he said.

While unknown perils of space may render the telescope unfit for duty by then, it may become a valuable artifact for future space archaeologists, Rebull and Werner said. One day, they may be able to retrieve it and study the scars left by Spitzer's solitary voyage around the sun. 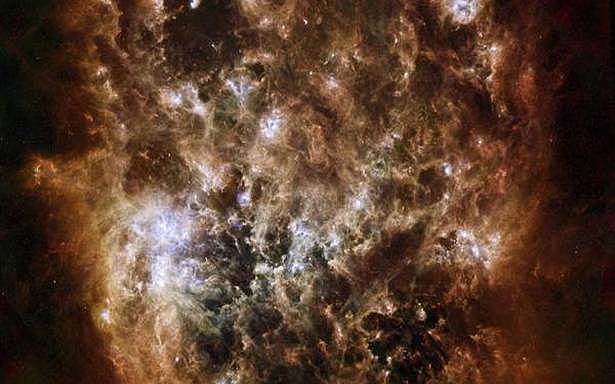 NASA decommissions Spitzer Space Telescope after 16 years of operation
Spitzer, which was launched in 2003, studied some of the most distant galaxies ever detected with the light from some…

"It allowed us to see what our human eyes could not see."

Spitzer contributed to advancing human knowledge of black holes and the birth and death of stars.

Forbes
A Few Of The Spitzer Space Telescope’s Coolest Discoveries

As NASA prepares to bid farewell to the Spitzer Space Telescope on Thursday, take a look back at some of…

NASA's Spitzer space telescope signed off on Thursday and went silent. But even during its final week of operation, the…