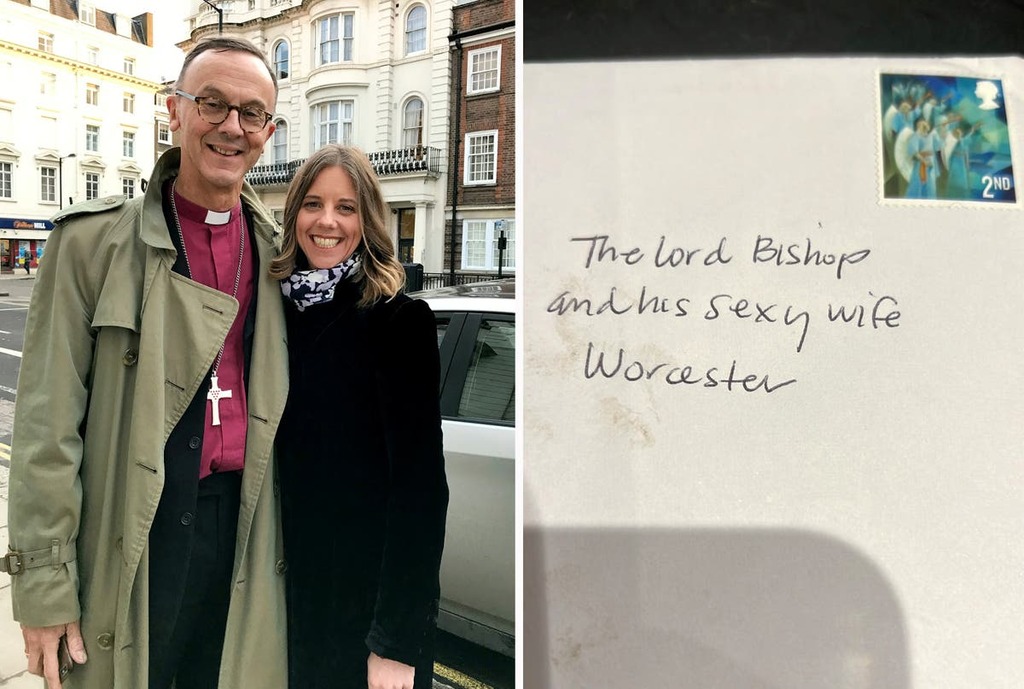 A bishop was shocked when he received a belated Christmas card addressed to only to “The Lord Bishop and his sexy wife”.

The Bishop of Worcester Dr John Inge, 66, had jokingly dared a friend to send the card, but did not expect Royal Mail to actually deliver it.

“It was from someone I know and when asked my address, I said ‘just send it to the Bishop of Worcester and his sexy wife’,” Dr Inge said.

“I wasn’t expecting the instructions to be followed! I was very impressed by Royal Mail when the letter arrived.”

Dr Inge had just celebrated his fourth anniversary with his wife, H-J Colston-Inge, 52, when he made the remark to his friend.

On Saturday, he tweeted out a photograph of the letter.

The address simply stated: “The Lord Bishop and his sexy wife, Worcester”. It contained no further details such as street name or postcode.

The tweet has since received more than 11,000 likes and hundreds of comments from social media users.

Dr Inge said that both he and his wife saw the funny side when the letter arrived.

“We were both very amused when it arrived,” he said.

“I tweeted it because I like to see fun and informative tweets, not unpleasant ones.”

The unusual letter delivery follows another Royal Mail feat when a letter was delivered in Northern Ireland despite having no address or surname.

Instead, it simply included a description of the intended recipient: “lives across the road from the Spa his ma + da used to own”.

“His mother was Mary and da Joseph,” the description continued. “Moved to Waterfoot after he got married, plays guitar and used to run discos in the parochial hall and the hotel in the 80s.

“Friends with the fella who runs the butchers in Waterfoot too.”

Amazingly, the letter was delivered to musician Feargal Lynn as intended.

Mr Lynn wrote on Twitter: “Harty applause to @RoyalMail Cushendall and Ballymena for being able to deliver this letter to me today.

“Got a much needed laugh! They had first name, the village where I grew up and half the postcode.. the rest is more like my life story!”