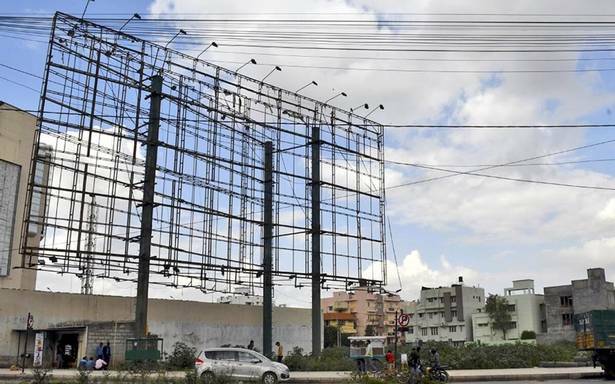 A Bill seeking to empower the urban local bodies to levy fee for granting permission for erecting outdoor advertisement boards (hoardings) was tabled in the Assembly on Tuesday.

The Bill was introduced to ensure that urban local bodies do not incur loss of revenue as advertisement tax has been subsumed under the Goods and Services Tax (GST). Karnataka Municipalities and Certain Other Law (Second Amendment) Bill was tabled by Law Minister J.C. Madhuswamy.

The Karnataka Gram Swaraj and Panchayat Raj (Amendment) Bill that seeks to provide for constitution of delimitation commission, among others, was also tabled in the Assembly.

The Bill, which was tabled by Rural Development and Panchayat Raj Minister K.S. Eshwarappa, is an exercise to ensure fair practices in the wake of several writ petitions being filed before the Karnataka High Court challenging the delimitation notification and reservation notification issued by the Karnataka State Election Commission as “arbitrary, irrational and ultra vires of the Constitution”.

Also, it has come in the wake of the Supreme Court’s view that the objective of maintaining a ratio between the population and territory cannot be effectively achieved during delimitation process without any research.

The Bill seeks to ensure participation of experts in the process of delimitation, define the powers and functions of delimitation commission besides providing for the commission to invite objections from general public before making any recommendation to the government.

Meanwhile, 10 Bills were introduced in the Legislative Assembly on the second day of the session. They include the Karnataka Stamp (Amendment) Bill that seeks to give effect to the State budgetary announcement of reducing the stamp duty from 5 to 3% for the first registration of apartments valued between the ₹35 lakh and ₹45 lakh; and Karnataka Khadi and Village Industries (Amendment) Bill.

The Karnataka Agricultural Pests and Diseases (Amendment) Bill that seeks to increase the penalty for violation of norms was also tabled.