The biggest cosmic explosion on record has been detected – an event so powerful that it punched a dent the size of 15 Milky Ways in the surrounding space.

The eruption is thought to have originated at a supermassive black hole in the Ophiuchus galaxy cluster, which is about 390m light years from Earth.

Simona Giacintucci, of the Naval Research Laboratory in Washington DC, the lead author of the study, described the blast as an astronomical version of the eruption of Mount St Helens in 1980, which ripped off the top of the volcano. “A key difference is that you could fit 15 Milky Way galaxies in a row into the crater this eruption punched into the cluster’s hot gas,” she said.

Galaxy clusters are among the largest structures in the universe, containing thousands of individual galaxies, dark matter and hot gas. At the heart of the Ophiuchus cluster there is a large galaxy that contains a supermassive black hole with a mass equivalent to 10m suns.

Although black holes are known as sinkholes that consume anything that drifts too close, they also expel prodigious amounts of material and energy. These jets occur when a disk of plasma accretes around the central black hole. When the inward flow reaches a certain limit, a proportion escapes being swallowed by the black hole and is redirected into jets that blast out in two perpendicular beams at close to the speed of light.

In this case, scientists think a jet would have travelled in a narrow beam for a certain distance, then hit something in space, which caused the beam to explode outwards in a burst of radio emissions. Maxim Markevitch, of Nasa’s Goddard Space Flight Center in Greenbelt, Maryland, a co-author of the paper, compared the process to a stream of air travelling down a drinking straw and then turning into a bubble at the end of the straw.

The first hints of the giant explosion were spotted by Nasa’s Chandra X-ray Observatory in 2016, which showed an unusual concave edge in the Ophiuchus galaxy cluster. However, at the time the possibility of this being caused by an explosion was discounted due to the huge amount of energy required to create such a large cavity.

The latest observations combined data from Chandra and ESA’s XMM-Newton space observatory and radio data from the Murchison Widefield Array (MWA) in Australia and the Giant Metrewave Radio Telescope (GMRT) in India to provide compelling new evidence for the gigantic explosion.

The observations confirm the presence of the curved edge and also reveal a huge patch of radio emissions tightly bordering the curve, which would correspond to the expected bubble. “This is the clincher that tells us an eruption of unprecedented size occurred here,” said Markevitch.

Scientists think the observed explosion may have occurred due to a spike in supply of gas to the black hole, perhaps when a galaxy fell into the centre of the cluster.

The event is thought to have taken place several hundred million years ago, with the black hole showing no signs of dramatic activity at present.

The findings are published in The Astrophysical Journal. 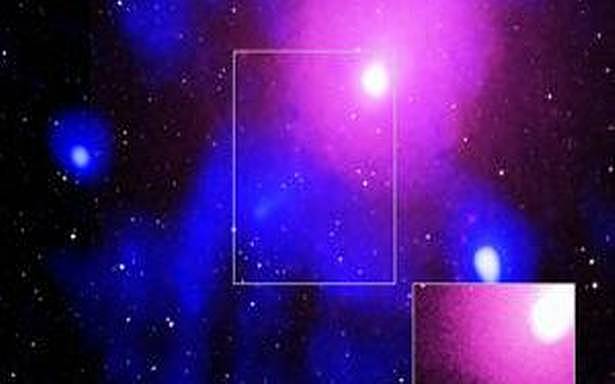 Biggest explosion seen in universe came from black hole
The explosion was so large it carved out a crater in the hot gas that could hold 15 Milky Ways,…

' We don't know why it's so big,' says astronomer

The universe is always changing, but we're often years behind tracking it as it does. Recently, scientists found the biggest…