Biden tells Xi US and China must not ‘veer into conflict’

By Vincent Ni, and Helen Davidson in Taipei 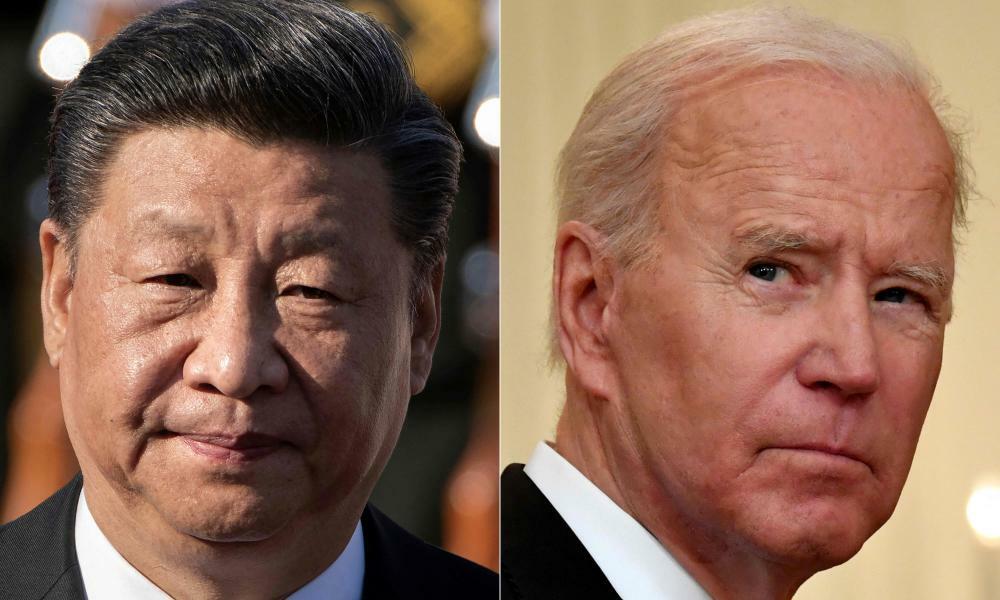 Joe Biden and his Chinese counterpart, Xi Jinping, have spoken in their first phone call for seven months, amid continuing tensions between the world’s two largest economies.

During the 90-minute call, which was initiated by the US president, the two leaders discussed their shared responsibility to ensure competition does not “veer into conflict”, according to a readout from the White House.

It said Biden and Xi agreed to engage “openly and straightforwardly”.

“This discussion, as President Biden made clear, was part of the United States’ ongoing effort to responsibly manage the competition between the United States and the PRC,” the statement said.

A Chinese readout said the conversation was candid and in-depth. “Whether China and the US can handle their relationship well bears on the future of the world. It is a question of the century to which the two countries must provide a good answer,” said Xi, according to the readout.

Xi allowed his officials to work with their US counterparts to “continue their engagement and dialogue to advance coordination and cooperation” on the climate emergency, Covid-19 response and economic recovery as well as on significant international and regional issues, but added that they should be “on the basis of respecting each other’s core concerns”.

Analysts in Washington said there has been ongoing frustration in the US that efforts to find common ground had so far been fruitless. They said China’s increasing aggression in the South China Sea and Taiwan strait, and the growing presence of the US and its increased support of Taiwan, had also increased concerns over the prospect of conflict.

China for its part accused the US of interfering in its domestic affairs by politicising issues such as Hong Kong and Xinjiang – both China’s territories. Some Chinese commentators went as far as to suggest the US was attempting to contain China.

Recent efforts to progress relations have stalled. Last week, John Kerry met China’s foreign minister, Wang Yi. Kerry told reporters he had urged Wang and the Chinese delegation to do more on the climate crisis, which was more important than politics.

Wang, however, countered that bilateral climate cooperation “cannot be separated from the wider environment of China-US relations,” and that Washington should “stop viewing China as a threat and a rival” and “cease containing and suppressing China all over the world”.

He added that the US saw the two sides’ joint efforts against global heating as an oasis. “But surrounding the oasis is a desert, and the oasis could be desertified very soon,” he said.

The two leaders also discussed the issue of the climate emergency in their latest call. The Chinese readout said Beijing had “taken the initiative to actively shoulder international responsibilities befitting China’s national conditions”.

Bilateral relations between two of the world’s most significant powers have plummeted since the Trump administration. A high-level meeting in March including Wang, China’s top diplomat, Yang Jiechi, the US secretary of state, Antony Blinken, and the US national security adviser, Jake Sullivan, also descended into hostile public rebukes.

According to the White House, Biden initiated Thursday’s call. A senior administration official told the Associated Press the White House had been unsatisfied with early engagements with China.

The official, who was not authorised to comment publicly and spoke on condition of anonymity, said White House officials were hopeful that Xi hearing directly from Biden could prove beneficial.

The White House official said Biden made clear to Xi that he had no intention of moving away from his administration’s policy of pressing China on human rights, trade and other areas where it believed China was acting outside international norms.