President Joe Biden's latest gambit to combat high gas prices will save some drivers a few cents at the pump—two months from now. But consumers might not see much in the way of savings at all, since they'll be buying dirtier, less efficient fuel that will require more frequent fill-ups.

Biden on Tuesday said he will direct the Environmental Protection Agency (EPA) to issue an emergency waiver allowing so-called "E15" gasoline to be sold between June 1 and September 15, when it is usually prohibited due to concerns about how the fuel contributes to air pollution.

Most gasoline sold in the U.S. is blended with 10 percent ethanol, a type of alcohol made from corn, thanks to a mandate originally created during the George W. Bush administration. Higher blends—like "E15," which is 15 percent ethanol—are a bit cheaper, but they burn less cleanly and provide marginally less energy. Though originally pitched as an environmentally friendly alternative to supposedly dirtier fossil fuels, studies have shown that ethanol actually emits more greenhouse gases. Nevertheless, the federal government has spent years subsidizing the production of ethanol, in no small part because politically powerful agricultural lobbies are big fans of the stuff.

It also happens to be a bit cheaper than traditional gasoline, which is why the Biden administration is suddenly so keen on it. "E15 is about 10 cents a gallon cheaper," Biden said Tuesday as he announced the emergency environmental waiver while touring an ethanol production facility in Iowa. "And some gas stations offer an even bigger discount than that."

Yes, but that statement comes with several important caveats. As Biden admitted during his remarks, E15 fuel is only available "at a few thousand pumps today." The actual number is about 2,300 stations, most of them in the South and Midwest. Not to worry, though, as Biden also committed taxpayers to pay for $100 million in upgrades to biofuel infrastructure, according to NPR.

Even if you happen to have one of those E15 fueling stations on your street, Biden's emergency order won't affect anything until June 1. That's perhaps a tacit admission from the White House that prices are likely to remain high for months—and a telling illustration of how little power the president has to curb high prices and control inflation in the short term.

Tuesday's monthly consumer price index report showed that inflation has hit a 40-year high of 8.5 percent over the past 12 months. Inflation in fuel prices was a significant driver of overall price increases during March, and Biden dutifully blamed Russia's war in Ukraine for much of that. But the White House continues to ignore or downplay the role that its own policies—and, in fairness, the policies of the Trump administration—played in worsening inflation by overheating the economy, particularly the decision to throw more than $800 billion in "free" money at American households during the pandemic.

The only real "winner" in Biden's ethanol decision, Reuters points out, is "the U.S. corn lobby" since farmers will likely benefit from "expanding demand for corn-based ethanol" this summer.

"It's not going to solve all our problems," Biden said Tuesday of his emergency ethanol order. Indeed, it's not clear that it will solve any of them.

What matters more, inflation or unemployment?

Lotta headlines today about "inflation at 40-year high." We have a nice test of whether the media is symmetrically interested in good news because in the next month or so, it's likely that unemployment will hit a 50-year low. Will this attract as many breathless headlines?

In one sense, he makes an interesting point. Inflation is not the only economic indicator out there, and right now workers are having an easy time finding jobs and seeing wages rising—as long as you don't look at inflation, which is turning those wage gains negative.

But there are a few answers to his question. First, bad news always gets more attention. Second, inflation hasn't been a major story for a good long while, and thus is more interesting than rote employment reports (even historically good employment reports). But probably most importantly, as Josh Barro writes in Very Serious, is that wages aren't rising fast enough to counter inflation, which leaves even employed workers feeling like they are falling behind:

The unfortunate story here is that, while the tight labor market was supposed to do two very good things, it actually only did one of them. The good thing it did was make it easier than usual to find work, especially for people on the margins of society who tend to have the most difficulty finding a job at all. That's great. But the other thing a lot of people expected—I expected—was that a tight job situation would tend to force wages to rise faster than prices, with workers capturing a larger share of total economic output as income. And that's not happening; the opposite is happening.

Dismantling global supply chains does not make them more resilient. In fact, as a new report from the International Monetary Fund makes clear, the opposite is true.

"Dismantling global value chains is not the answer. More diversification, not less, improves resilience," the researchers wrote in a blog post accompanying the chapter.

Simulating a lockdown akin to those in China in early 2020, the researchers said by that reducing labor supply by 25 percent in a single large supplier of intermediate components, the average economy's output fell by around 0.8 percent.

But with higher diversification among source countries, the decline would be reduced by about half, to about 0.4 percent.

Even in scenarios where there are shocks to multiple countries, high source diversification reduces the level of GDP decline by about 5 percent.

• Police in New York are looking for a 62-year-old man, Frank R. James, who has been named a "person of interest" in Monday's Brooklyn subway shooting that left 23 injured.

• In China, other cities might soon be joining Shanghai under strict COVID lockdown—though it is notable that Shanghai's draconian rules don't seem to be preventing case numbers from spiking:

'Does anyone have antipyretic medicine?' Shanghai mother of young child asks for neighbors' help at 2.30am. She says her baby has a 40°C fever and she needs fever reducing medicine. Locked down, drugstores closed, access to urgent care services severely limited. pic.twitter.com/ekjbQ7lkyO

• Perhaps unsurprisingly, people are fleeing Hong Kong in even larger volumes than usual now that another COVID wave is striking China:

Covid-19: Since the outbreak of the fifth wave, Hong Kong has seen a net outflow of 147,324 residents, meaning that there were more people leaving than entering the city: https://t.co/WpdsOb7pfv. Official data shows a significant uptick from the end of Jan. pic.twitter.com/vn2elsn0Dg

• It's not just you: Everything really has gotten stupider.

• A Twitter shareholder is suing Elon Musk, who is now the social media company's largest shareholder, based on allegations that Musk failed to disclose that he owned more than 5 percent of the company before acquiring more shares in recent weeks.

• A lawsuit alleges that this Texas prosecutor spend years writing rulings for the judge who was hearing his cases—and getting paid to do it.

Thread: For 20 years, prosecutor Ralph Petty secretly worked for the judges who decided his cases. At night, he'd write rulings in favor of…himself.

He even sent someone to death row. And now, someone is finally trying to hold him to account. My latest: https://t.co/wPEbXU1TFB

• Drone delivery is the future, but will it ever be the present? Not yet.

The post Biden's Plan To Ease Gas Prices Will Save Drivers a Few Cents at Some Pumps…2 Months From Now appeared first on Reason.com. 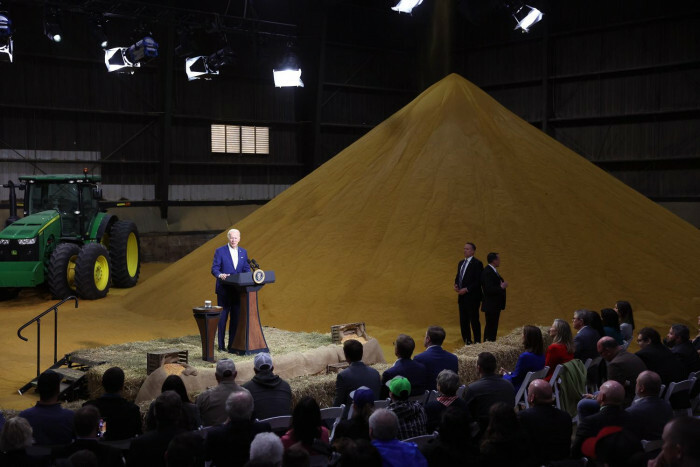 Biden to Allow More Ethanol in Gas This Summer in Bid to Lower Prices
The Biden administration said Tuesday it would allow high-ethanol content gasoline to be sold in the hot summer months, in…

Washington (AFP) - In an effort to ease Americans' pain at the gas pump, President Joe Biden has announced his…

Politico
One subscription that gives you access to news from hundreds of sites
Iowa rejected Biden, but president back to sell rural plan

Iowa has never been fertile ground for Joe Biden