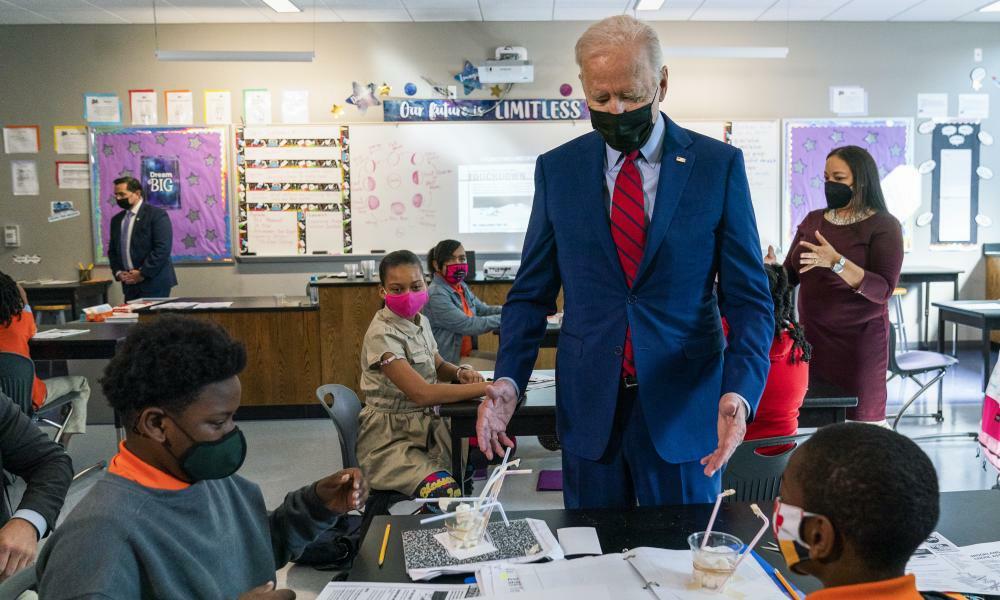 Joe Biden’s new hard line on vaccine mandates in America has dropped in an already politically fraught environment, where some governors have banned requirements by education authorities that masks be used in schools even as many experts lament low rates of vaccination and some hospitals are straining under the pressure of the Delta variant of Covid-19.

The mandates will cover 80 million workers at large businesses and 17 million health workers across the US. Staff in healthcare systems receiving Medicaid and Medicare funding must be vaccinated, with rare exemptions for medical reasons. Businesses with more than 100 employees must require either vaccination or weekly testing. In addition, large businesses must offer paid time off for employees and their families to receive the vaccines and recover from any side effects.

“​​What we need is things that work right now,” Dr Ashish Jha, dean of the Brown School of Public Health, told reporters of the announcement from the White House. “So I actually think it will make a big difference.”

But several Republican governors and leaders have already announced plans to sue the Biden administration for “unconstitutional” overreach, and there has been widespread anger and pushback from many influential and powerful conservative figures.

Biden’s move comes against a backdrop of vaccination rates that have stalled at lower levels than many other industrialized countries where the vaccine is widely available. Experts see a constellation of motives and communities varying from conservatives who see it as a civil liberties issue to religious vaccine skeptics to communities of color distrustful of a historically racist medical establishment.

The US has a long history of mandating vaccines. But previously, vaccinations were required only for government entities or on the state level. This is the first vaccine mandate that extends to so many Americans. However, legal scholars say the mandate falls within the power of federal agencies.

“We are at a critical moment,” Jha said. “If we did not really begin to implement these things – if we did not substantially ramp up vaccinations, make testing much more widely available – we’re looking at thousands of people dying every day for weeks and months on end.”

In the past few months, Biden has strengthened his suggestions to get vaccinated, pleading with Americans on Thursday night to “​​please, do the right thing”.

Republican governors of Arkansas, Mississippi and Tennessee – states with some of the lowest vaccination rates and some of the highest numbers of Covid-19 in the country – have rejected Biden’s calls for mandatory vaccines.

They say vaccines are some of the best tools we have to contain the pandemic, but they stop short at mandating it. Yet other state officials have voiced support.

Vincent Dixie, a Tennessee state representative, said in an emergency, the government’s job was to step in to ensure the health of its people. “We have all gotten vaccines because the government tells us to, starting from when we were babies, where we were first born we had vaccines, to enter into grade school we had vaccines,” he said.

Objecting to the government requirements to be vaccinated, he added, “is an unwise argument to settle in”.

However, America’s deeply polarized politics has been brought fully to the fore in the increasingly heated debate over vaccine mandates.

In Arizona, for example, the reaction was split. The state’s Republican governor vowed to fight the administration’s “dictatorial approach”. But the Democratic mayor of Phoenix, the state capital, said that the move was “the critical action we need to appropriately fight this virus”.

Some health leaders wish a more aggressive approach to containing the pandemic had been implemented earlier. Dr Georges Benjamin, executive director of the American Public Health Association, said the mandates may have come “too little, too late”.

Schools are not included in this mandate, but Biden urged school districts to vaccinate as many people as much as possible. Nationwide, he said, about 90% of school staff have been vaccinated.

“There’s much more work to do, but if we implement the things that the president talked about [Thursday], I think we can look forward to a far better fall and winter this year than we had last year,” Jha said.

“And we can look forward to a 2022 where we can spend days and even weeks, and not think about the pandemic. It won’t happen naturally. It will happen if we do the kinds of things that we heard about today.”

• This article was amended on 13 September 2021. An earlier version said that some US state governors had banned mask use in schools; rather, some have forbidden education officials from making such mask-wearing a requirement.