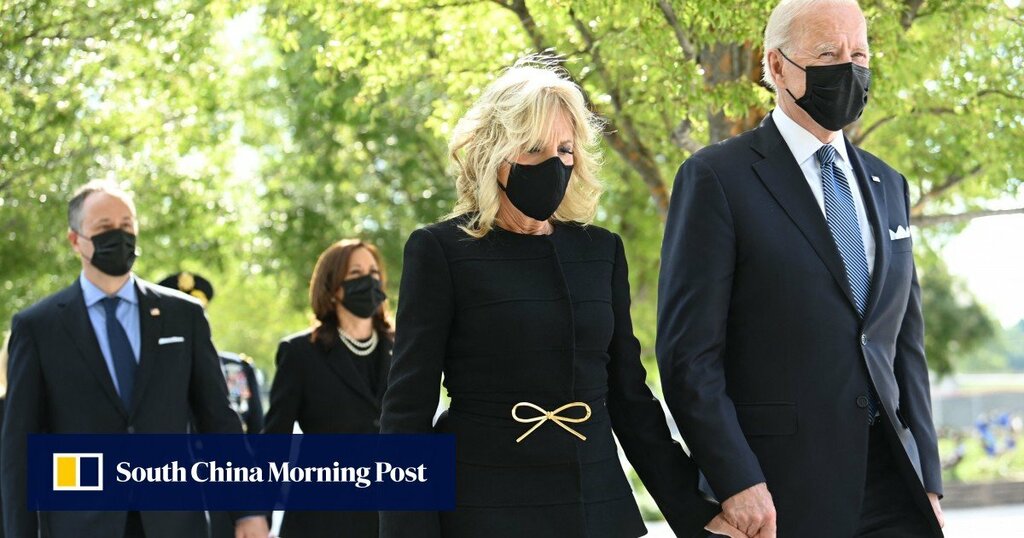 At a sombre ceremony in lower Manhattan on Saturday, US President Joe Biden marked the 20th anniversary of the September 11 terrorist attacks, standing silently among a crowd of mourners while the nearly 3,000 victims’ names were read aloud by family members.

“No matter how much time has passed, these commemorations bring everything painfully back as if you just got the news a few seconds ago,” Biden said in a video released by the White House as part of the memorial activities.

The ceremony, attended by Barack Obama and Bill Clinton, as well as other current and former senior officials, was held under a sunny blue sky at the 9/11 memorial site in New York City, where the 110-storey twin towers of the World Trade Centre once stood. In their place now are two square reflecting pools where water flows down into voids in the ground.

The attacks of that day killed 2,977 people, injured thousands more, and launched the US into a two-decade war in Afghanistan that only ended late last month.

Bruce Springsteen and Broadway actor Kelli O’Hara sang at the commemoration, but by tradition, no politicians spoke there.

“We learned that unity is the one thing that must never break,” said Biden in his video message. “To me, that’s the central lesson of September 11. It’s that at our most vulnerable, in the push and pull of all that makes us human, in the battle for the soul of America, unity is our greatest strength.”

The events of 9/11 upended American domestic politics and foreign policy, from airport security, to debates about the government’s use of surveillance and torture, to political campaigns won and lost over support for the “forever wars” fought in the years since.

They also shattered an aura of safety for an American population that had not seen such a deadly assault on home soil since the Japanese attacked Pearl Harbour in 1941.

Within the span of 51 minutes on the sunny morning of September 11, 2001 – between 8.46 and 9.37 – planes hijacked by al-Qaeda members slammed into the north tower of the World Trade Centre, then the south tower, and then the Pentagon, outside Washington. Bells chimed on Saturday to mark the exact moments of the attacks.

A fourth plane – United Airlines Flight 93 – also hijacked and headed for Washington, crashed in Shanksville, Pennsylvania, at 10.03 before it could hit a target.

Passengers stormed the cockpit and brought it down in a field, 20 minutes’ flying time from the US capital.

In Shanksville, Biden placed a wreath at Memorial Plaza, home to the Wall of Names, where the names of the passengers and the crew from that flight are inscribed in marble.

The president and first lady then walked with relatives of the crash victims into the grassy field where the jet came to rest.

“It’s one thing to say, I know I should step up,” Biden said during his visit. “It’s another thing to do it. That’s genuine heroism.”

Biden later visited a memorial at the Pentagon, concluding his tour of all three sites targeted in the attacks.

Along with the first lady, Biden saluted as a bugler played Taps, the US military funeral tune, at the sprawling five-sided building that is the seat of US military power.

Vice-President Kamala Harris and her husband, Doug Emhoff, were also with the president as he laid a wreath at the Pentagon 9/11 memorial.

One of the planes hijacked by al-Qaeda members on September 11, 2001 slammed into one side of the Pentagon, killing 125 people.

For many people in the US, there are still constant, visceral reminders of the toll of the attacks: deceased family members and friends, an altered New York City skyline, lingering prejudices against Muslims in America.

And the death toll continues to rise. Thousands of first responders, recovery workers and residents in the neighbourhoods near the twin towers have developed cancer and other severe illnesses, which scientists have linked to the toxic fumes filling the air while the “ground zero” site smouldered for weeks.

More than 2,000 people have already died of illnesses related to the attack, according to the 9/11 Memorial Museum.

The 20th anniversary of the attacks also comes as Biden has made clear that he wants to push the US into a new era overseas – one that no longer has Washington pouring trillions of dollars and thousands of troops into “nation building” in far-off Afghanistan, and instead focuses on standing up to geopolitical rivals such as China and Russia.

“And here’s a critical thing to understand,” Biden said late last month as he announced the end of the two-decade US war in Afghanistan. “The world is changing. We’re engaged in a serious competition with China.”

“As we turn the page on the foreign policy that has guided our nation the last two decades, we’ve got to learn from our mistakes,” he said.

For years after 9/11, US foreign policy seemed to have a near-singular focus on terrorism and the war on terror, as attacks persisted all over the globe in places as far apart as London and Bali and Yunnan.

Washington and its allies, along with Beijing, have all used the war on terror as a reason to justify various controversial policies, many of which Biden has vowed to end.

The US military prison in Guantanamo Bay, Cuba – where hundreds of suspected terrorists were detained in the years after 9/11, and a focal point of criticism against the US war on terror – still holds 39 prisoners.

Biden has said he will close it, though it remains unclear how he will accomplish that politically difficult goal, which former president Barack Obama had also promised to do. One of the remaining prisoners who would need to be taken elsewhere is Khalid Sheikh Mohammed, considered the architect of the 9/11 attacks.

Biden ended the US war in Afghanistan after two decades, long after US troops killed Osama bin Laden, the al-Qaeda leader, only to see the country fall back under the control of the Taliban as soon as the US and its allies left. The Afghan militant group is the same one Washington had vowed to defeat after it allowed the 9/11 attackers a safe space to plan their assault two decades ago.

George W. Bush, who was president during 9/11, said on Saturday at the service in Shanksville, Pennsylvania that disunity today made him “worried” about the future of the United States.

“In the weeks and months following the 9/11 attacks, I was proud to lead an amazing, resilient, united people,” Bush said. “When it comes to the unity of America, those days seem distant from our own.”

“So much of our politics has become a naked appeal to anger, fear, and resentment. That leaves us worried about our nation and our future together,” he added,

China has used the war on terror as an excuse to round up an estimated 1 million Uygur Muslims in its far-west Xinjiang region and put them in camps – a response, the government says, to multiple violent attacks over the years.

Rights organisations say China’s mass detention of the Uygurs is the largest internment of a minority population since the Holocaust.

As Biden seeks to move on from the war on terror era of American foreign policy, he has insisted that the US will not back down from battling enemies wherever they are in the world.

“We will maintain the fight against terrorism in Afghanistan and other countries,” he said in his speech declaring the end of the US war in Afghanistan. “We just don’t need to fight a ground war to do it.”