President Joe Biden on Tuesday called on Americans to reject the “poison” of white supremacy and urged lawmakers — again — to ban “weapons of war” like the rifle a white teenager allegedly used to kill 10 people while targeting Black shoppers at a grocery store in Buffalo on Saturday.

As he has over the years, the president said semiautomatic firearms like the Bushmaster XM-15, an AR-15-style rifle, that the suspect used should be illegal. He called on all Americans to reject and “confront the ideologies of hate” — but Biden did not announce plans to send lawmakers a draft bill that would crack down on combat-style guns or violently pro-white ideologies and groups.

“Now is the time when people of all races, of all backgrounds, should speak up and reject white supremacy. … In America, evil will not prevail,” he said during remarks at the city’s Delavan Grider Community Center. “White supremacy will not have the last word.”

Speaking after he and his wife met privately with families of the victims, Biden said blame rests on more than just the alleged shooter.

“What happened here is simple and straightforward: Terrorism — domestic terrorism,” he said. “Hate that through the media and politics and the internet has radicalized too many white citizens into believing they will be replaced by the other, who don’t look like them.”

To the shooter and other believers in “replacement theory,” the president charged them with falling for a lie.

“And I condemn those who spread the lie for power and political gain and for profit,” Biden said. “White supremacy is a poison … running through our body politic.”

Asked before he left Buffalo if any specific members of Congress or media figures deserved blame, he told reporters that anyone who echoes or advocates replacement theory deserves some blame “not for this particular crime, but it serves no purpose, no purpose, except for profit and/or political benefit.”

At the community center, the president spoke of his own pain in losing family members over the years, saying the feeling is like a “black hole” in one’s soul. He spoke of the deceased victims, a brain cancer survivor and a father buying his young son a birthday cake and a father who was the rock of his family buying snacks for their weekly movie night.

“Where’s daddy?” the president said the 3-year-old birthday boy later asked. Biden audibly choked up in one of the most powerful moments in his role as mourner-in-chief since taking office.

“It’ll bring a smile to your lip before a tear to your eye,” he told family members of their grief and memories of the fallen. “It will take time. … But I promise it will come.”

His remarks came after several top aides signaled there is little Biden can do. Democrats lack the votes in both chambers to pass any gun-related bill — especially in a midterm election year.

Democratic lawmakers have called the massacre an act of “domestic terrorism,” and House leaders plan to bring a bill to the floor crafted by Judiciary Committee Democrats that would give the Department of Homeland Security and Justice Department more tools to fight it. But the measure lacks ample support in the Senate to get to Biden’s desk.

Jonathan Finer, the deputy national security adviser, told CNN Tuesday morning the White House is still asking law enforcement officials if they even need new legislative powers — a signal the administration is not totally behind the House domestic terrorism bill. He said Biden could sign additional gun-related executive actions, but did not describe any that might be coming.

Payton S. Gendron of Conklin, N.Y., remains in police custody after local and federal authorities say the 18-year-old attached a camera to his combat helmet, drove to a Tops Friendly Market in a predominately Black neighborhood in Buffalo clad in body armor and began firing his Bushmaster at employees and shoppers.

Biden and first lady Jill Biden visited a makeshift memorial outside the still-closed supermarket, arriving in the presidential motorcade just after 10 a.m. Jill Biden carried a bouquet of white flowers and placed them at the memorial before the first couple stood silently paying their respects.

They then talked with local officials near a tree around which flowers, candles and other items were stacked. Balloons fluttered, as did the suit coats of the president and watchful Secret Service agents, on a sunny and breezy day in Buffalo. Signs were affixed to a fence behind the memorial.

Schumer and Hochul walked slowly away as the presidential group departed. On Sunday, the state’s chief executive slammed social media companies, saying those that run the sites on which Gendron posted his racist manifesto and attack plan do too little to spot possible mass murderers.

The Bidens then met with victims and family members, but out of the view of television cameras, reporters and microphones.

As they did, the American Firearms Association, a pro-gun organization, fired off an email blasting “freedom-hating zealots” in New York state, contending Hochul and Democratic state lawmakers “are hoping to pass even more gun control while they still have time!”

The group tried to distance other gun owners from the suspected shooter, and blamed Democratic state officials for passing and enacting gun control laws.

“Make no mistake: while the bloodthirsty killer who murdered these innocent people is to blame for his actions in Buffalo, the politicians in Albany who voted to largely disarm New York State have blood on their hands, too!” AFA wrote, pointing to state bans on magazines that hold 10 or more rounds and other measures.

“This murderer totally ignored this stupid law, and said he was happy knowing that any armed citizen who confronted him would be low on ammo,” the organization wrote, also noting Gendron “passed his background check and then shot 13 people.”

Despite a spate of mass shootings in recent years, Republicans and Democrats in Congress have been unable to agree even on a measure to expand background checks. A key senator whose vote Democratic leaders and Biden would need to do so on Monday evening essentially said the Buffalo shooting is unlikely to spur action.

“We can’t even get Manchin-Toomey, which didn’t violate anyone’s rights. It just said there should not be a commercial transaction unless there’s a background check,” Sen. Joe Manchin III of West Virginia reportedly told reporters. “It’s the most, I think it’s the most agreed upon, it’s the most accepted in the country and we can’t even get that done.”

But during his remarks, the president focused mostly on a nationwide rejection of “replacement theory” and white supremacism.

“We need to say as clearly and forcefully as we can that the ideology of white supremacy has no place in America. The failure to say that is complicity. Silence is complicity,” he said. “In my lifetime. Hate and fear are being given too much oxygen by those who pretend to love America.” 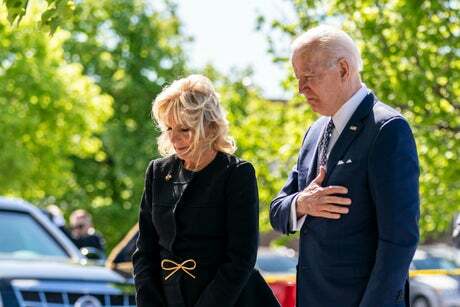 The Guardian - US
In a visit to Buffalo, President Biden denounces white supremacy as a poison

The president visited the supermarket where last weekend's deadly shooting took place, then forcefully denounced white supremacy and the racist…