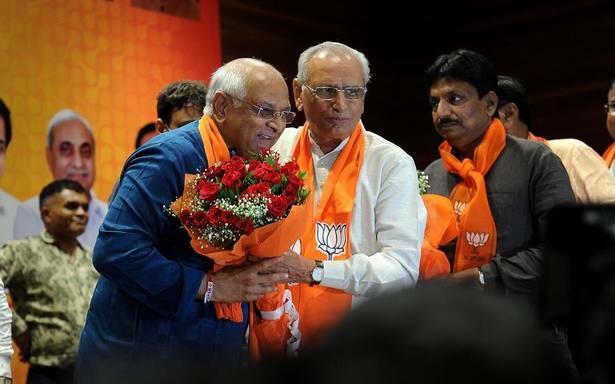 Newly elected Chief Minister Bhupendra Patel is set to be sworn in by Gujarat Governor Acharya Devvrat at the Raj Bhavan in Gandhinagar on Monday, September 13, 2021.

The Chief Minister alone will take oath on Monday while the Cabinet members will be sworn in separately after the names are decided by the party.

According to sources, Mr. Shah, Mr. Bhupendra Patel and other leaders will decide on the Cabinet Ministers as many senior leaders and members of the outgoing Cabinet are likely to be dropped to bring in new faces and infuse dynamism in the administration.

There is no clarity yet whether Nitin Patel will continue as Deputy Chief Minister. “We don’t know yet whether there will be a new Deputy CM or just Cabinet Ministers,” a party leader said.

Also it is not clear whether Mr. Nitin Patel will be part of the Cabinet or not.

Mr. Nitin Patel on Monday denied media reports that he was sulking after being overlooked for the CM post as the party chose Mr. Bhupendra Patel, a first-time legislator and protege of Uttar Pradesh Governor Anandiben Patel, as the successor of Vijay Rupani.

In the Cabinet, the party is likely to give larger representation to legislators from Saurashtra and north Gujarat where the BJP expects to improve its prospects in the next Assembly election.