BHOPAL: A 28-year-old man, who was arrested by Kamla Nagar police on charges of molesting his sister-in-law (Elder brother's wife), allegedly died by suicide by hanging himself in the lock-up in the wee hours of Saturday morning.

The deceased was recently released from jail around one-and-a-half-month back. Acting on information, senior police officers reached the spot and started investigations.

Police commissioner recommended a judicial probe as it is a case of custodial death. JMFC Ravi Bourasi visited Kamla Nagar police station and started the probe. The post-mortem of the deceased was conducted under his supervision.

ACP Tiwari said that on Friday afternoon, Rakesh's sister-in-law approached Kamla Nagar police and filed a complaint stating that the accused barged into her room at midnight on Thursday and tried to sexually abuse her. When she protested, the accused assaulted her. Acting on her complaint, Kamla Nagar police registered a molestation and assault case against him around 5pm and detained him. His sister-in-law requested police not to release him or else he would repeat the incident on reaching home.

ACP Tiwari said that police arrested the accused around 8pm and shifted him to the lock-up as he was to be produced before the court and sent to jail the next day. He had his dinner at the lock-up and was given a blanket to sleep.

ACP Tiwari said that around 5.30am on Saturday, Rakesh took the extreme step by making a loop by tearing the blanket and hanged himself after tying the blanket with a string to the rod of the lock-up door. As soon as the head constable present at the police station spotted him hanging, he informed senior police officers but by the time he had already died.

Additional DCP Shrutkirti Somvanshi said that being a custodial death case, the police commissioner recommended a judicial probe in the matter which has already begun. Prima facie five police officials including the SHO Kamla Nagar have been line attached. The night officer SI Laxman Rai, head constable Jagdish Yadav, ASI Chandrahaas Choubey along with a constable were present at the police station premises but they were out of the police station building so they have been line attached for negligence. The investigation officer ASI Anil Kumar Shrivastava, who arrested Rakesh, has been line attached because he did not frisk the accused properly before shifting him to lock-up.

He said that preliminary enquiry in the matter will be conducted by ACP (TT Nagar) Umesh Tiwari. He will submit a report before DCP Zone-1 on which further enquiry would be conducted. 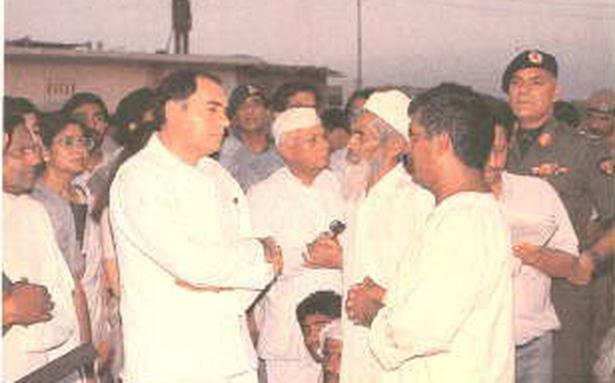 35 years later, Maliana’s wounds may have healed but the ache remains
Petition filed in High Court has sought reinvestigation into the massacre of Muslims in the U.P. village in 1987

The Hindu
One subscription that gives you access to news from hundreds of sites
Aurangabad: Man, wife arrested on murder charge

AURANGABAD: A 40-year-old man and his first wife have been arrested by the Jalna police for the alleged murder of…

BHOPAL: A man allegedly slit his 26-year-old wife's throat with a knife and disposed her body at Hathaikheda Dam in…