Bettors got crushed by the Panthers and Raiders in Week 5 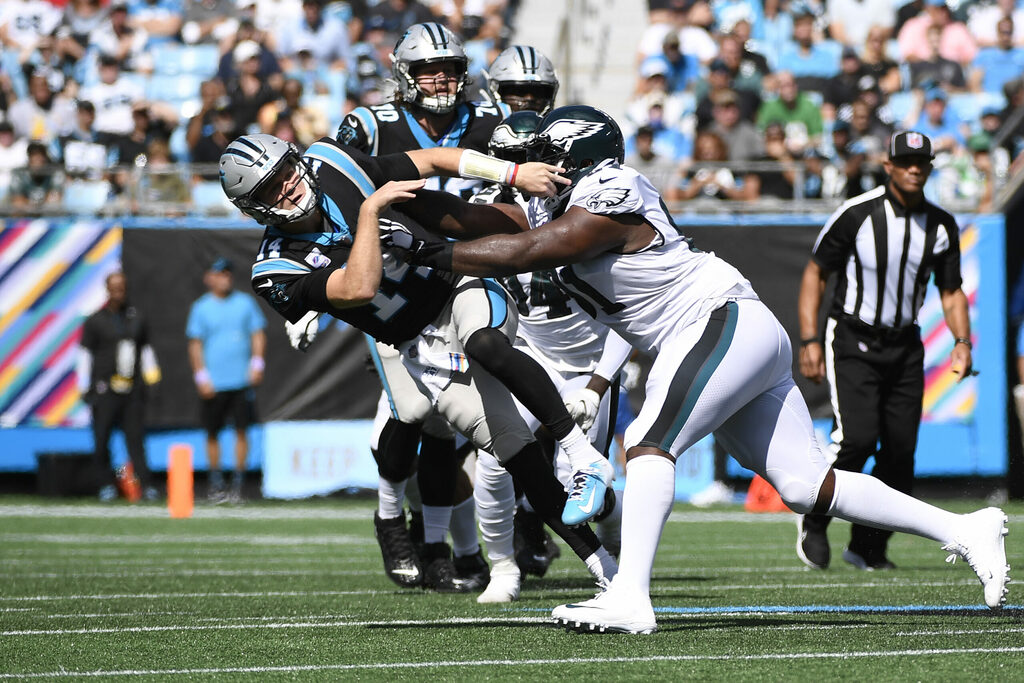 The lovefest between NFL bettors and Carolina Panthers quarterback Sam Darnold may have reached its inevitable expiration on Sunday.

When the former New York Jets starter reverted back to his old ways with three interceptions in a 21-18 home loss, the betting public suffered as well. According to The Action Network, 69 percent of wagers placed on the spread took Panthers -3 while 57 percent of moneyline bettors grabbed Carolina -138 (bet $138 to win $100).

Both of those bets looked solid by halftime with the Panthers leading 15-6 and the Eagles’ offense unable to move the ball downfield. Then Philadelphia out-scored Carolina 15-3 over the final two frames with quarterback Jalen Hurts rushing for two touchdowns after driving his team to the red zone. The latter score left the Panthers trailing by three with 2:38 remaining in regulation—still plenty of time for Darnold to get Carolina in field goal range.

Instead he only managed one first down before a false start left him with first-and-20 at the Panthers’ 35-yard line. The ensuing play saw Darnold throw into double-coverage towards wideout Robby Anderson, only to be picked off Steven Nelson.

Steven Nelson picks it for the @Eagles! #FlyEaglesFly

Darius Slay recorded the first two interceptions off Darnold on Sunday, so the quarterback may have been trying to avoid the star cornerback. He couldn’t avoid the same fate, however, and bettors will surely remember that going forward.

The Bears won,  20-9, as Chicago rattled off back-to-back touchdown drives after the Raiders took an early 3-0 lead. Vegas quarterback Derek Carr completed 22 of 35 passes for 206 yards and an interception against a Bears defense that sacked him three times, deflected three passes and saw Khalil Mack rack up eight tackles against his former team.

Khalil Mack takes down his former teammate Derek Carr on the two-point attempt.

Week 5 of the NFL season saw a number of betting favorites easily beat the spread with the likes of the Los Angeles Rams, Tampa Bay Buccaneers and Tennessee Titans each earning a stress-free win. Hopefully those who took the Panthers and Raiders were able to a cash in bigger tickets on those matchups.