The famous Chester Races' May Festival Ladies Day returned with thousands of colourful outfits this week - and as fashionistas will know getting your heels stuck in the grass can be par for the course at such events. But the winner of the Races' Best Dressed Lady competition has shared a "genius" tip for protecting your heels while enjoying the revels of the Races.

Revellers turned out in their thousands in a host of colourful ensembles for this year's May Festival at the world's oldest operating racecourse in Cheshire. And Ladies Day was blessed with blue skies and sunshine which saw stylish guests out in their most colourful fashions.

That included the winner of the Boodles Best Dressed Lady competition at the races extravaganza - Jackie Chambers who dazzled in an outfit as bright as the May sunshine. Jackie won the top prize at the event wearing a bright yellow bodycon dress teamed with matching heels and a huge floral fascinator.

And, after claiming her prize, regular racegoer Jackie shared a genius fashion tip for others who like to wear sky-high heels to the event. For Jackie, 56, said she has come up with a cunning way to protect her favourite stilettos from the grassy areas that you have to totter over at the Races.

Sharing her fashion tip she said: "I love to wear heels but I keep them looking good by wrapping sellotape all around the heel.

"It stops them from getting dirty and also helps to stop them from sinking as badly into the grass."

Jackie, from Essex, collected the top prize on Ladies Day of a Boodles diamond pendant and £700 fashion vouchers from designer Matthew O'Brien. Jackie, wearing a Sophie Hunter dress and Steve Madden heels, said winning the top prize was a huge honour as she's been a regular at Chester and other races for years.

She said: "I've been coming to the races for years and never won anything like this before so it's a tick off the bucket list. Who would have thought a little ray of sunshine would win it?"

Runner-up in the fashion competition was mum-of-four Emma Hall from Congleton who was enjoying a day out with friends. She wore a pretty pink print dress from River Island teamed with a hat from John Lewis.

Meanwhile third best dressed lady was PR boss Lisa Morton, from Sale, who wowed in a Roksanda blue dress with hot pink accessories and blue heels from Zara. Ladies heading to the event on Thursday were able to enter the competition at dedicated stands around the course, before a panel of judges selected their top three.

Chester Races May Festival is one of the most popular races events on the social calendar, and has returned this year with three days of horse racing and events concluding with Friday's TOTE Chester Cup Day. Established in 1539, Chester is the oldest racecourse still in operation in the world.

The return this year saw thousands of guests back at the Little Roodee course, including a host of famous faces. On Wednesday's opening day stars including Helen Flanagan and Charlotte Dawson were seen enjoying the event alongside the team from fashion house Lavish Alice.

Meanwhile former Manchester United star Michael Owen was spotted at all three days, having a vested interest in the races given he's now a well-known race horse owner with stables of his own near Malpas in Cheshire. Michael attended with wife Louise and their model daughter Gemma, 19, who wowed in a navy blue bodycon dress.

And he was in good company on Friday as his former boss, Manchester United legend Sir Alex Ferguson, was in attendance. Sir Alex headed to enjoy the races with Class of '92 stars Paul Scholes and Nicky Butt. 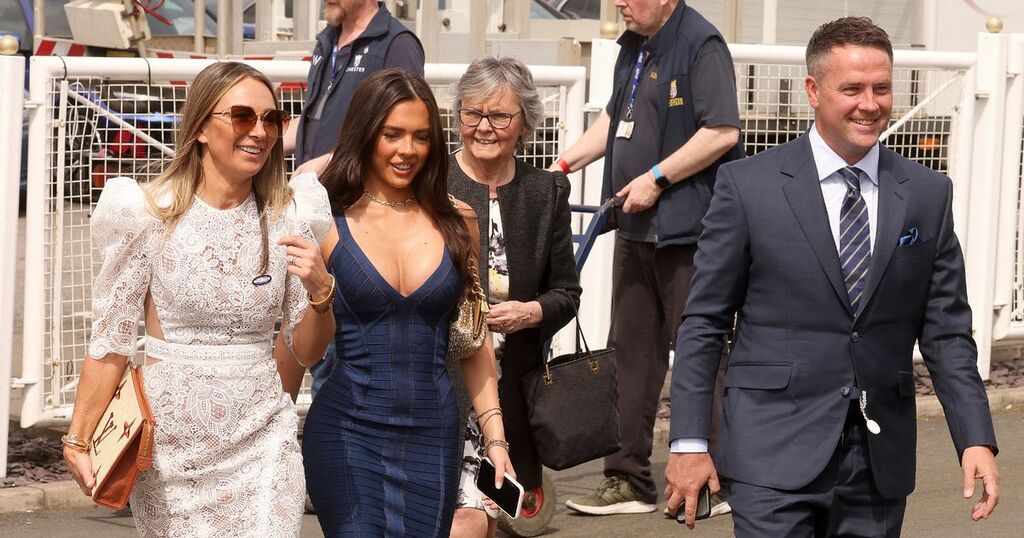 Michael Owen, 42, cut a dapper figure in a blue suit and tie and certainly had a spring in his…