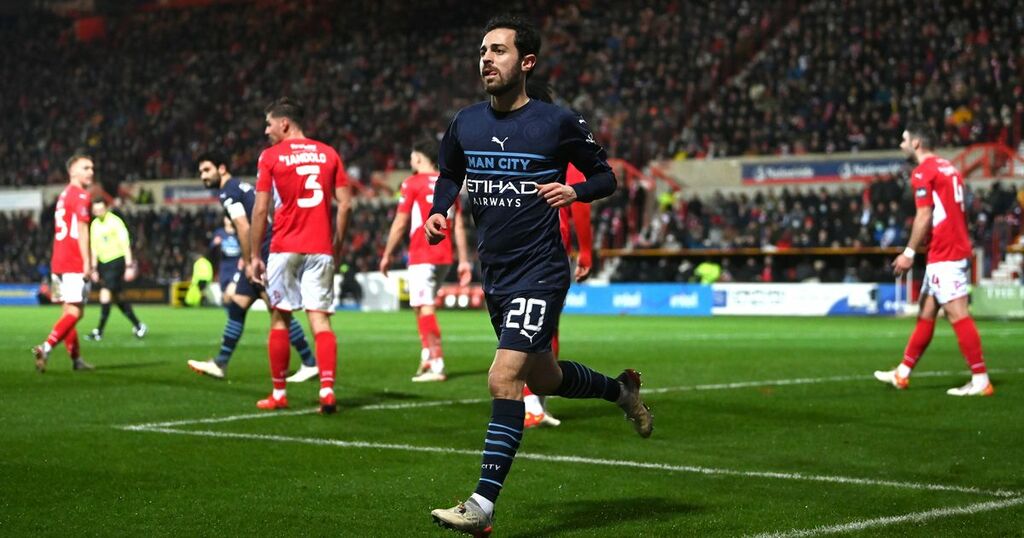 During Manchester City's 4-1 FA Cup win against Swindon Town on Friday, all eyes were on Cole Palmer - and rightfully so.

The 19-year-old academy graduate put in a dazzling display at the County Ground, pulling off a brilliant assist for City's opener before wrapping up the game with a stunning goal of his own.

Palmer is the latest weapon that Pep Guardiola has added to his arsenal in a season that has seen his side's attacking play become more multi-faceted and fluid than ever before.

One player that has been absolutely vital to City's attacking prowess this season - despite not signing a striker in the summer they have scored 53 goals in 21 Premier League games - is Bernardo Silva.

Bernardo is on course to achieve his best goalscoring season in sky blue, having already matched the personal best of seven league goals he scored in 2018/19.

The Portuguese attacker has achieved this through playing in multiple positions this term, including number eight, right winger and false nine.

The latter is how he appeared to line up against Swindon, but his exploits in the first half suggested that he was playing as a conventional striker, something we have rarely seen from the 27-year-old.

Palmer took most of the credit for City's opener thanks to his trickery and tenacity on the wing, but Bernardo's movement before tapping home from a yard out was exceptional.

As Palmer twisted and turned at the edge of the penalty area, Bernardo hung on the shoulder of centre-back Dion Conroy. As Palmer accelerated past his opponent and prepared to square across goal, Bernardo made his move.

He faked a darting run to the defender's right shoulder and instead quickly moved to his left. It all happened in the space of a millisecond, but that movement was enough to fool Conroy and make him lose his man. Before he knew it Bernardo was unmarked and was tapping in one of the easiest goals he's ever likely to score. As simple as the movement looked, it was anything but.

Three minutes later Bernardo's striker-like movement was evident again when he was instinctively in the right place to latch on to a wayward defensive header back towards goal.

In gambling on the ball falling to him, he did what all good strikers do, although his lashed volley over the bar showed that his composure in front of goal could still do with a bit of perfecting.

It's unlikely that Bernardo will find himself deployed as a conventional striker that often, as we saw in the second half, City's use of positional play allows others to switch into the position as and when circumstances dictate.

But watching at home in Manchester, Guardiola will have been delighted by Bernardo's performance. The manager has often talked in the past about his players needing the 'smell' of goals; it looks like Bernardo has got it.

Do you think Bernardo Silva should lead the City line more often? Follow our City Is Ours writer Alex Brotherton on Twitter to get involved in the discussion and give us your thoughts in the comments section below.