The reigning Formula E champion looked imperious in the lead, having wrested control of the race as early as the first corner from Mortara with a surprise launch down the inside from third on the grid.

Mortara, who was perhaps preoccupied with trying to defend from fellow front-row starter Robin Frijns, left a smidgen of space on the inside of the corner which de Vries took with glee, scooping up the lead and immediately beginning to build a break over the Mercedes-powered Venturi.

De Vries then took the initiative with his attack mode activation - this time, a solitary attack mode spanning eight minutes - and briefly conceded the lead back to Mortara by picking up the 250kW power mode on lap 9, but re-passed two laps later into the first corner once more.

From there, the Dutchman rarely looked threatened, although Mortara tried a slightly different attack mode strategy to try and resolve his first-corner disappointment and catch back up to de Vries.

Waiting for the other frontrunners to run out of attack mode, a strategy which worked for his victory on Saturday, Mortara hung on until lap 15 - six laps later than de Vries, Antonio Felix da Costa and Stoffel Vandoorne - to enter the realm of 250kW power.

With the incentive to start making moves through the field after dropping to fifth, Mortara cleared Andre Lotterer, Vandoorne and da Costa on consecutive laps to return to second, setting about eating into de Vries' lead.

But Mortara couldn't quite contend with de Vries' pace and energy, where the gap remained at around 2.5s throughout the second half of the race as the Mercedes driver had the race in the palm of his hand.

Thus, de Vries collected his first win since the Diriyah season opener, 2.454s clear of Mortara - who now moves up to second in the drivers' championship following his impressive haul of points from Berlin.

Vandoorne put together a second consecutive charge from the fourth row to the podium, battling among the likes of Frijns, Lotterer, da Costa and Lucas di Grassi as the quintet sought to claim the final step on the rostrum.

Clearing Frijns for good on lap 26, Vandoorne then fired his way past da Costa and began to squabble over third place with di Grassi - and three laps from the end, the Belgian squeezed past the Brazilian to ensure Mercedes had two spots on the podium.

Di Grassi finished fourth, locking out the top four positions for Mercedes-powered cars, as Robin Frijns recovered from a botched attack mode activation to finish fifth. This warranted an investigation before stewards deemed to take no further action.

On the final lap, Frijns was bidding to pass da Costa into Turn 6 and nudged the back of the DS Techeetah driver - almost sending da Costa into the wall but for the latter's excellent save into the braking zone.

Da Costa had cleared a fading Rowland to ultimately finish sixth, as the Mahindra driver managed to keep Lotterer away from his eighth place.

Jean-Eric Vergne fell out of the runner-up spot in the championship battle with an off-colour race, having passed Mitch Evans for ninth to double his points score as the Jaguar driver completed the top 10

Sam Bird was just 1.1s behind his team-mate, waiting until very late to use his attack mode activation to enact a late-race charge after a difficult qualifying session. 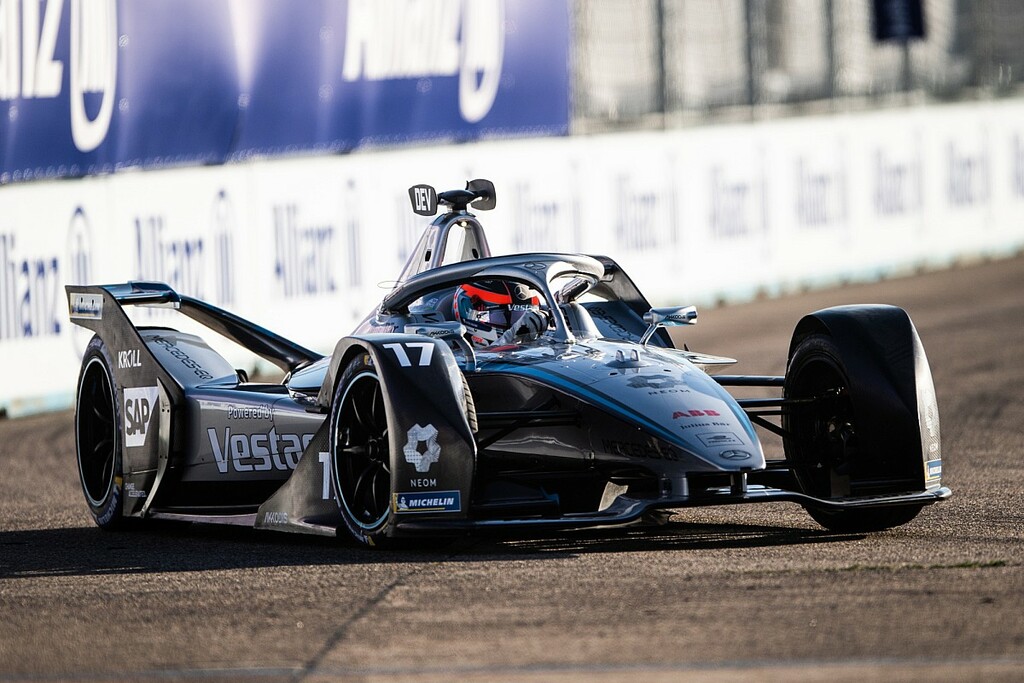 Motorsport
One subscription that gives you access to news from hundreds of sites
Berlin E-Prix: Mortara holds off Vergne for second victory of 2022