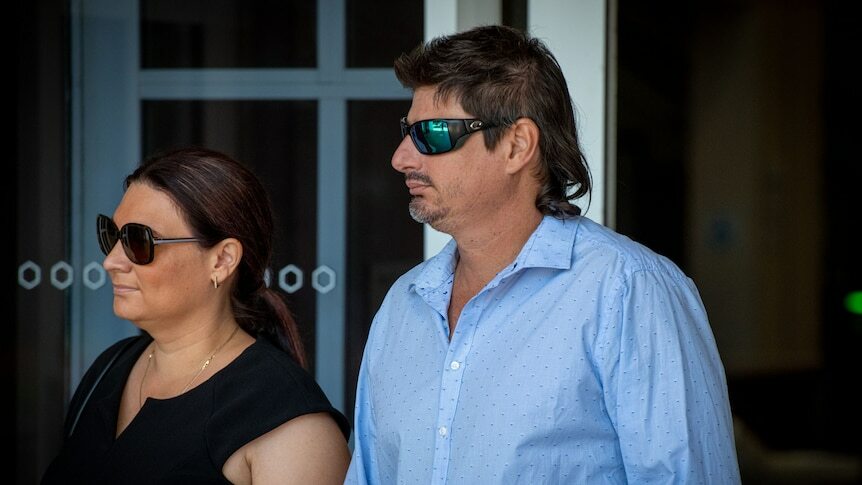 A Darwin tradie has told a Supreme Court jury he lent his ute to accused gunman Benjamin Hoffmann hours before an alleged shooting spree, despite knowing there was a Bowie knife and 50 shotgun cartridges unsecured in the back seat.

Mr Makrylos told the court he bought the ammunition and knife on the morning of June 4, 2019, the same day Mr Hoffmann is alleged to have murdered four men.

The witness testified he purchased the items for an upcoming hunting trip.

Mr Makrylos said the Bowie knife, which was roughly 30cm long, was a gift for his then-11-year-old daughter.

Mr Makrylos's wife, Christina Makrylos, said her husband had bought their daughter a pink hunting knife for her seventh birthday and told the jury she would have "rolled [her] eyes about" the Bowie knife purchase.

"It's no secret that she loves to go hunting with her dad," Ms Makrylos said.

Mr Hoffmann has pleaded not guilty to all charges.

The jury heard Mr Hoffmann had a shower at Mr Makrylos's house that morning and changed into a Pelican Plumbing hi-vis shirt.

Mr Makrylos said shortly after that, he dropped Mr Hoffmann at a shopping centre in Palmerston, and he himself went to Coolalinga Guns & Ammo.

Mr Makrylos said the last time he saw Mr Hoffmann on June 4 was at about 4:00pm or 5:00pm, when he agreed to lend the accused his car, despite knowing the knife and ammunition were still unsecured on the back seat.

Mr Makrylos was also shown photographs of the gun Mr Hoffmann allegedly used that afternoon in the front seat of a white ute.

Mr Makrylos identified the car as his property, but told the jury the gun was not.

The jury was then shown CCTV from inside the shop, timestamped 10:10am on June 4, 2019, which showed Mr Makrylos entering Coolalinga Guns & Ammo.

Mr Makrylos identified himself in the footage.

Jim Dick told the jury he sold Mr Makrylos the knife and cartridges, and remembered he asked for heavy-load shotgun cartridges to go pig hunting.

Mr Dick said the customer asked him, "What would do the most damage?" when selecting which cartridges to buy.

Mr Dick also said Mr Makrylos told him the knife was a "present" for a "friend or a mate".

Mr Deligiannis said he previously lived at the Palms Motel and in a unit on Gardens Hill Crescent.

Prosecutors allege Mr Hoffmann killed a man at the motel and a second man at the block of units on the afternoon of June 4, 2019.

Mr Deligiannis told the jury he previously had a sexual relationship with the woman Mr Hoffmann believed was his girlfriend.

The witness denied "pimping" out Mr Hoffmann's lover and Mr Deligiannis told the jury he had "never" been violent with her nor had he ever supplied her with methamphetamines.

The trial is scheduled to run for another six weeks and will continue on Monday.