Bengaluru’s infamous traffic snarls may have inspired many a meme and film, the city’s population and private vehicle count may have exploded, but the fleet size of the public transport utility has remained unchanged.

On other hand, the Bangalore Metropolitan Transport Corporation (BMTC), which provides bus services in the city, has failed to expand its fleet size and increase the ridership. While the number of buses in 2011-12 was 6,064, now it is 6,763. The lack of a robust public transport system has forced Bengalureans to rely on private vehicles.

The Comprehensive Mobility Plan for Bengaluru, which was made public in 2019, stated that after 2011, the number of buses has not kept pace with the growing population of the city, and bus utilisation has been dwindling in comparison with the ever-rising number of private vehicles in the city. The mobility plan also projected that the city requires 12,134 buses by 2025 and 15,134 by 2031.

However, the BMTC has failed to expand its fleet size owing to various issues that include financial crisis and legal hurdles to induct diesel buses. When the pandemic broke out, like other road transport corporations in the State, the BMTC too suspended introduction of new buses for close to two years. After a long gap, last December, the BMTC introduced electric buses on lease for the first time and inducted BSVI buses.

Ashish Verma, convenor, IISc Sustainable Transportation Lab, said, “Over the time, when the population is increasing and the city is growing rapidly, the travel demand too has gone up. To meet the demand, there is a need to increase the fleet size.”

There are many complex issues why the BMTC could not expand its services, he explained. “Over the years, the BMTC not doing well in terms of finances over the years and outbreak of pandemic resulted in more financial burden. It is becoming a norm across the globe that governments are subsidising the transport system. Governments should fund procurement of new buses and subsidise the fare to make the bus services more affordable for the common man. In addition to inducting new buses, there is a need for thorough rationalisation of scheduling of services and providing bus networks,” he added.

Significantly, compared to other modes of public transport, the BMTC carries the highest number of passengers in the city. The BMTC has a fleet size of 6,763 buses and on an average, 25 lakh people are using the bus services every day. The corporation runs around 5,600 schedules of the services. On an average, 50,000 trips are operated daily on 1,800 to 1,900 routes.

On the other hand, the Bangalore Metro Rail Corporation Limited (BMRCL) provides Namma Metro services on a 55 km metro line. At present, more than 4 lakh passengers use the metro services every day. The South Western Railway operates 39 MEMU and 24 DEMU services routes helping people to commute from suburban areas to Bengaluru.

People advocating for a robust public transport system demand the government to fund procurement of new buses and subsidise the bus fare. Bus Prayanikara Vedike on many occasions had demanded the State government to reduce the bus fare and make commuting affordable for common people. The Vedike maintains that bus fares charged in the city are higher than in other cities. On the other hand, BMTC officials say that the bus fares of BMTC have not been revised since 2014 despite rising fuel expenses and salary costs.

Chairman of the BMTC, N.S. Nandiesha Reddy said, “Though we have a fleet size of 6,700 buses, we are in a position to use 5,600 odd buses. The remaining buses are old and all are not fit to be operated on the road. From December, we have added 643 buses and 238 buses will be added very shortly. The State budgetary allocation has been made for 1,000 buses, which will be added in the coming year. Under the central government scheme, the BMTC will get 1500 buses out of which 300 are expected this year. The BMTC could not add the buses as the previous government did not provide enough funds for procurement.”

The BMTC’s attempt to bring in an intelligent transport system to make travelling more convenient and reliable has not yielded the expected results owing to various issues. There has been a growing demand from passengers to introduce a robust mobile app.

Director (IT) of BMTC Surya Sen A.V. said, “By August 15, we will introduce the mobile app which will have various features to help the general public. Passengers will be able to identify nearby bus stops, plan their journey, book tickets, share location and others. In case of emergency, they can also reach a helpline.”

On the bus tracking system, he said that under the Nirbhaya scheme, buses are being fitted with tracking devices and cameras. “Due to a shortage of chips used in tracking devices, installation was delayed. Devices will be installed in 5,000 buses. This will help bring in operational efficiency and provide good services to the general public,” he added.

The BMTC is also contemplating introduce digital passes for students. They can travel in city buses by showing their digital passes on the mobile. “Nowadays, most of the students use mobile phones. We are deliberating on the introduction of digital buses which will be more convenient. However, those students who do not use mobiles can travel using smart cards (passes),” said Mr. Sen, adding that for the current academic year, the BMTC is planning to introduce 4 lakh passes. 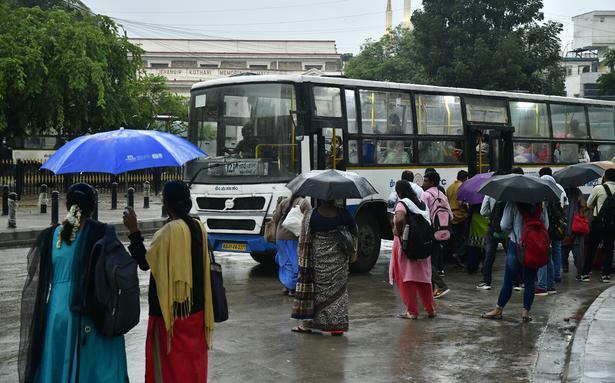 Only 50% of bus stops in Bengaluru have shelters
Women face safety issues; people with disabilities and senior citizens disappointed with lack of inclusivity

The Hindu
One subscription that gives you access to news from hundreds of sites
Delhi: 100 e-buses to roll out next week, depot ready with fast chargers