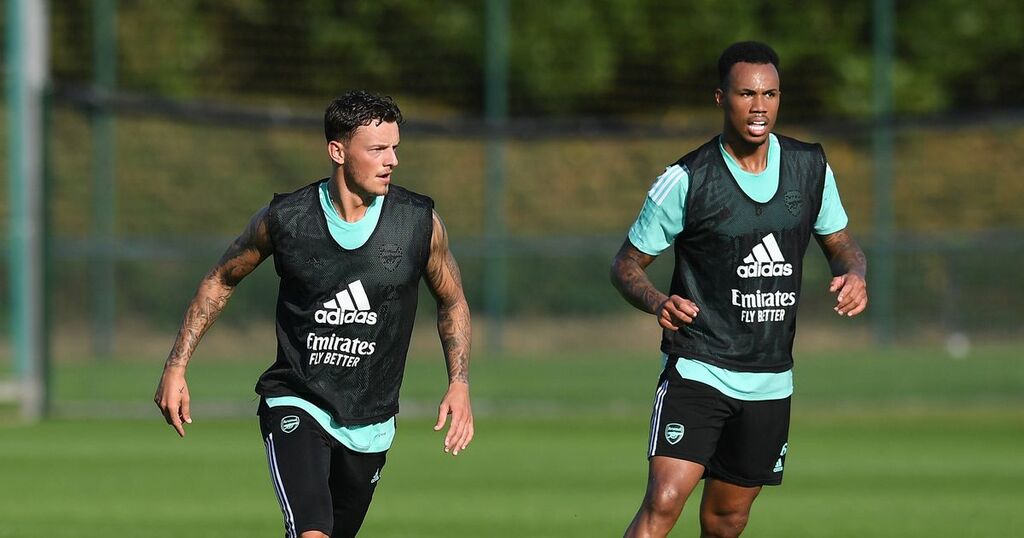 Arsenal face a pivotal clash this weekend as they take on Norwich City in a must-win match in the Premier League.

The Gunners are yet to register a single point, or a goal for that matter, in their opening three league matches of the 2021/22 season, meaning Mikel Arteta 's job has come under the spotlight once again.

The visit of the Canaries, a newly-promoted side, this weekend is the perfect opportunity for the north Londoners to kickstart their season and the squad, the ones who are not on international duty at the moment, have been put through their paces at London Colney.

Now, football.london has taken a close look at what we could see from Arsenal's training session via new photos that have been released.

Arsenal defenders Gabriel Magalhaes and Ben White were both present in training on Monday.

The former, Gabriel, is yet to play this season for the Gunners after suffering an injury whilst playing for Brazil at this summer's Olympics.

Meanwhile, White has played - but just the one game, the opening day defeat to Brentford, before he contracted Covid-19 and was forced to isolate and recover from the illness.

Many have tipped Gabriel and White to be Arteta's go-to centre-back partnership and the prospect of that at the weekend is certainly an exciting one.

Charlie Patino, who usually plays with Arsenal's youth teams, was pictured training with the senior players at London Colney.

The 17-year-old is very highly-rated within the club and has been rewarded by getting the opportunity to play with experienced Premier League stars.

Patino is yet to make the squad under Arteta this season, but will be hoping that an opportunity may arise soon.

Arsenal midfielder Thomas Partey was pictured training with his team-mates after an ankle ligament injury that he picked up in a pre-season friendly clash against Chelsea last month.

The Ghana international will seemingly be in contention for the Norwich clash, as he looks to be included in the squad.

Like Partey, Eddie Nketiah also suffered an injury in the pre-season defeat to Chelsea in August and has been sidelined ever since.

However, Nketiah has now been pictured in training as he nears his return to action. The English forward was strongly linked with a move away from Arsenal over the summer transfer window, but will remain with Arteta's squad for the time being.

The 22-year-old, though, has less than 12 months remaining on his deal with the Gunners, so it is unclear how Arteta will use him over the course of the season.