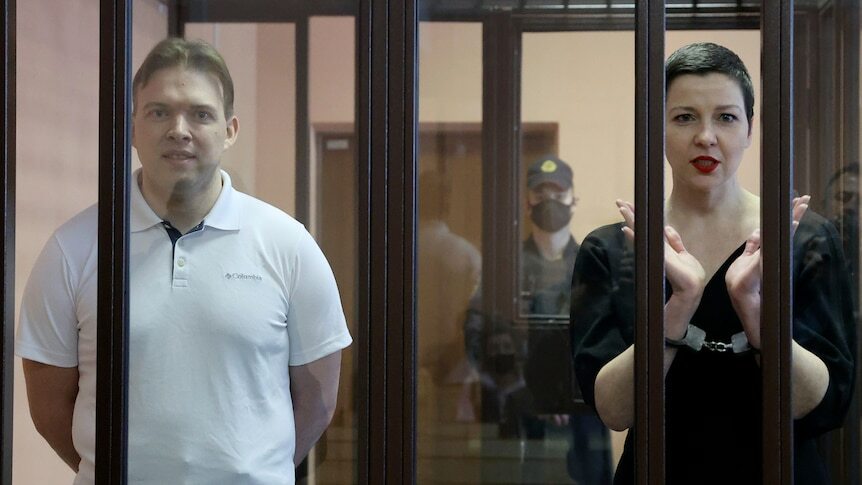 A court in Belarus has sentenced key opposition figure Maria Kolesnikova to 11 years in prison on national security charges, in a ruling decried by human rights activists.

Kolesnikova was arrested a year ago after she led mass protests against President Alexander Lukashenko.

Her lawyer Maxim Znak, who has also been in custody, was handed a 10-year prison sentence.

The pair were found guilty of conspiring to seize power, creating an extremist organisation and calling for actions damaging state security.

Kolesnikova is the only major leader of last year's unprecedented protests still in Belarus.

She has been in custody for a year, after resisting a forced deportation by ripping up her passport.

In a video from inside the court shown by Russian media, Kolesnikova — who was handcuffed inside a defendant's cage — made a heart-shaped symbol with her hands, which she often did at protest rallies.

She was smiling and wearing her signature dark red lipstick.

"Dear spectators, we are happy to see you," Znak, pretending he was inviting an audience into a theatre, said before the sentence was read out.

The pair were tried behind closed doors, with their families only allowed to be present at the sentencing hearing.

"For many, Maria has become an example of resilience and the fight between good and evil. I'm proud of her," Kolesnikova's father Alexander said.

Amnesty International said the ruling was "designed to crush the hopes" of a generation of Belarusians.

The EU condemned the ruling as a "blatant disrespect" of rights and Britain said it was an "assault on the defenders of democracy."

The US State Department called the sentences "further evidence of the regime's total disregard for the human rights and fundamental freedoms of the people of Belarus".

Kolesnikova, a 39-year-old former flute player in the country's philharmonic orchestra, became a symbol of the protest movement in Belarus.

In power since 1994, Mr Lukashenko has been cracking down on opponents since the protests, which erupted when he claimed victory in a disputed election.

Last September KGB agents grabbed Kolesnikova in the street, put a sack over her head, pushed her into a minibus and drove her to the Ukrainian border.

She reportedly resisted the attempt to throw her out of the country by jumping out of the car.

Ms Tikhanovskaya stood for president in place of her jailed husband and claims to have been the true winner of the August presidential election. She and Ms Tsepkalo both fled Belarus to EU countries.