Lebanese authorities have arrested 16 people as part of an investigation into the Beirut port warehouse explosion that devastated the capital, according to state media.

Judge Fadi Akiki, a government representative at the military court, said authorities had so far questioned more than 18 port and customs officials and workers responsible for or involved in maintenance at the warehouse, which housed highly explosive material that blew up on Tuesday.

“Sixteen people have been taken into custody as part of the investigation,” Mr Akiki was quoted as saying by Lebanon’s state-run National News Agency. Local media reported the port's general manager was among those detained.

Tuesday’s blast killed at least 145 people and injured about 5,000 others, while dozens are still missing.

Lebanese president Michel Aoun says the explosion was caused by 2,750 tonnes of ammonium nitrate, which had been stored unsafely in a port warehouse ever since it was confiscated from an impounded cargo ship in 2013.

Lebanon’s central bank has also ordered a freeze on the accounts of the heads of Beirut port and Lebanese customs along with five others, according to a central bank directive seen by Reuters.

The directive, dated 6 August, from the central bank special investigation commission for money laundering and terrorism fighting said the decision would be circulated to all banks and financial institutions in Lebanon, the public prosecutor in the appeals court and the head of the banking authority.

It said the freeze and lifting of banking secrecy would apply to accounts directly or indirectly linked to Beirut Port general manager Hassan Koraytem, Lebanese customs director general Badri Daher and five others, including present and former port and customs officials.

While investigators have focused on port officials, many Lebanese citizens claim that government corruption and mismanagement led to the disaster.

France’s president Emmanuel Macron, the first world leader to visit Beirut since the explosion, described it as a “metaphor for Lebanon’s current crisis” and said a “new political order” was needed.

Citizens held anti-government protests to coincide with the visit of Mr Macron, who also promised to help coordinate intentional aid – provided the authorities crack down on corruption.

Earlier in the day, Mr Macron was mobbed by demonstrators and residents of Beirut who implored him to take action against the capital’s leaders.

After visiting the devastated port, the French president walked through one of the worst-hit neighbourhoods, Gemmayzeh, down a street lined with wrecked buildings.

Gathered protesters chanted “Revolution!” and “The people want to bring down the regime!” — slogans used at mass protests last year.

Mr Macron told the crowds he would propose “a new political pact” when he met the government later. Then, he added, “I will be back on the first of September and if they can’t do it, I will keep my responsibility toward you.” He also promised that French aid would be given out with transparency and “will not go into the hands of corruption.” 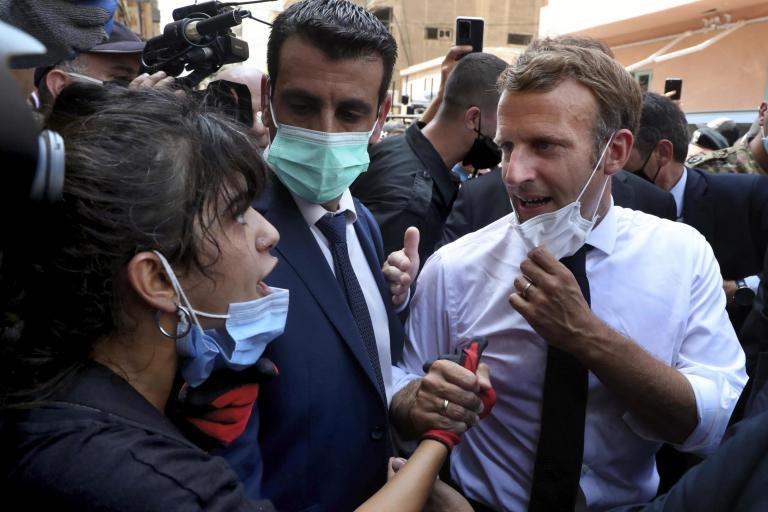 Evening Standard
One subscription that gives you access to news from hundreds of sites
Beirut explosion: At least 135 killed and 300,000 homeless overnight after Lebanon port blast

The Independent UK
In pictures: Lebanon's capital in ruins after Beirut port explosion