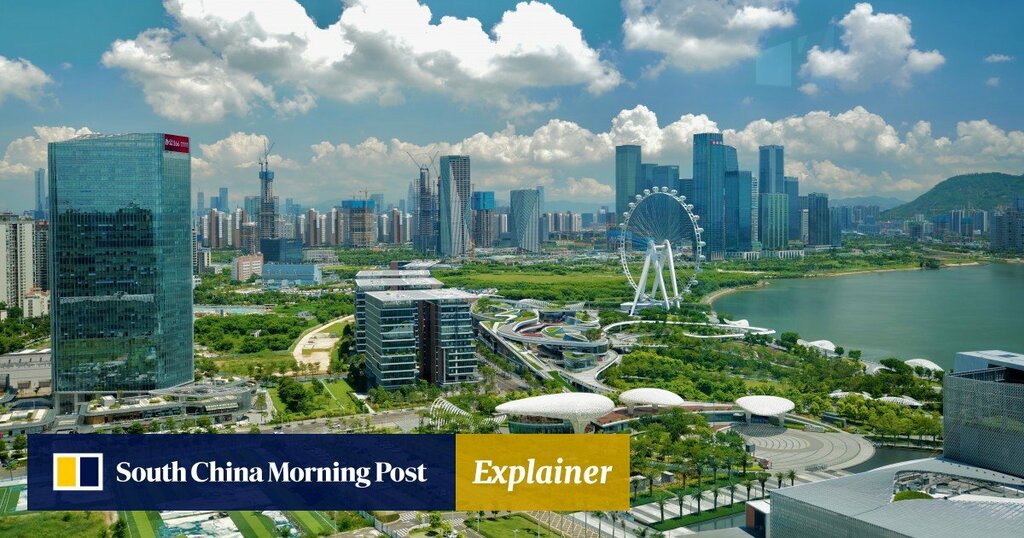 Beijing’s separate new plans to link its two special administrative regions – Hong Kong and Macau – to their neighbouring mainland Chinese cities through the Qianhai and Hengqin zones are far more than an economic blueprint to enhance cross-border collaboration.

The broad road maps, each with ambitious economic and political goals, not only steer the national strategy of the Greater Bay Area development, but are also aimed at moving forward the implementation of “one country, two systems” with pilot governance schemes in the collaboration zones.

Hong Kong’s leader Carrie Lam Cheng Yuet-ngor has pledged the city would take an active role in making it a reality, noting its own economic horizons would expand alongside those of the area.

The Post outlines key differences between the two zones and what they mean to Hong Kong and Macau.

What are the Qianhai and Hengqin economic zones?

Both areas were designated as new economic zones in 2009.

Under a plan endorsed by the State Council in 2010, Qianhai, on the western coast of Shenzhen, needs to become a district for businesses to work with their Hong Kong counterparts in developing modern services industries, and serve as a pilot area for closer cross-border cooperation.

Hengqin is an island in Zhuhai three times the area of Macau. It was partly leased to the casino hub where the law of the former Portuguese colony applied. The enterprise income tax rate for Macau companies in the zone is lower than the 20 to 25 per cent rate on the mainland.

What does the latest Qianhai plan say?

Under the updated plan, the size of the economic zone will grow eightfold in coming years, from 14.9 sq km to 120.6 sq km.

The 14-paragraph plan mapped out a vision for Qianhai’s business environment to become “world class” by 2035.

“The Qianhai zone must deepen its service trade liberalisation with Hong Kong and Macau, expand the opening up of its financial industry and legal services, as well as participate in international collaboration,” the plan says.

What are the key differences between the Qianhai and Hengqin plan?

1. Qianhai focuses on business competitiveness. Hengqin is centred on the vibrancy of one country, two systems.

Both plans aim at deepening regional collaboration and breaking new ground in the country’s pursuit of opening up on various fronts. Beijing’s long-term goal for the Qianhai-Hong Kong cooperation zone is to cultivate a “globally competitive business environment”, which is driven by innovation and enhanced mechanisms to open up, by 2035.

By the same year, according to the blueprint, the Hengqin-Macau zone should be able to “fully demonstrate” the vibrancy and niches of the one country, two systems principles, enhance efficiency of public service, and achieve economic diversification in Macau.

2. Approach by Qianhai is to expand, while that of Hengqin is to adopt a new governing model

In achieving the starkly different policy goals, a key measure for Qianhai is to increase the size of the economic zone, comprising almost entirely reclaimed land.

New areas will offer “an innovative testing ground” for Hongkongers to not only set up businesses, but also schools and medical institutions.

According to reports by Xinhua, it is expected to offer a “wider stage” for the city to expand its growth and for young people to seize new opportunities.

Highlights of Hengqin’s plan fall on its pilot measures of joint governance of the cooperation zone by the mainland and Macau governments. Guangdong authorities are responsible for maintaining the social order of the mainland zone.

A “dual-director” system will be put in place to steer the development of the zone by the governor of Guangdong province and the chief executive of Macau.

While both plans aim to supercharge growth encompassing nine cities, Qianhai’s blueprint emphasises the development of the modern service and technology industries, among others. It details how Hong Kong should make good use of its advantages in artificial intelligence, health tech, financial tech, and the Internet of Things to accelerate commercialisation.

Sectors highlighted for the Hengqin-Macau zone are more diversified, considering the former Portuguese colony’s overreliance on casinos. Apart from enhancing Macau universities’ research abilities to drive innovation and technology in the bay area, the road map lists various industries, ranging from Chinese medicine, gems trade and tourism to financial services, that Macau needs to boost and deepen collaboration on with mainland cities.

Government, businesses ‘must work together to make most of Greater Bay Area’

4. Concerns are over Hong Kong losing its edge, while for Macau, it is about blurred borders

Considering new initiatives to set up international economic and technology talent organisations in Qianhai, analysts warned that Hong Kong, known for its access to overseas markets, risked losing its competitive edge if it failed to grasp the opportunities.

But a major concern for Macau was that the co-governance model would further weaken the differences of the two systems and that distinction – including the border and the cultural difference – would disappear at some point in the future.

“Hong Kong companies will see major appeal from Qianhai for the space, tax incentives and the unique rules and systems, which could make things impossible in Hong Kong possible in Shenzhen,” Xu Hongcai, deputy director of the China Association of Policy Science’s economic policy committee.