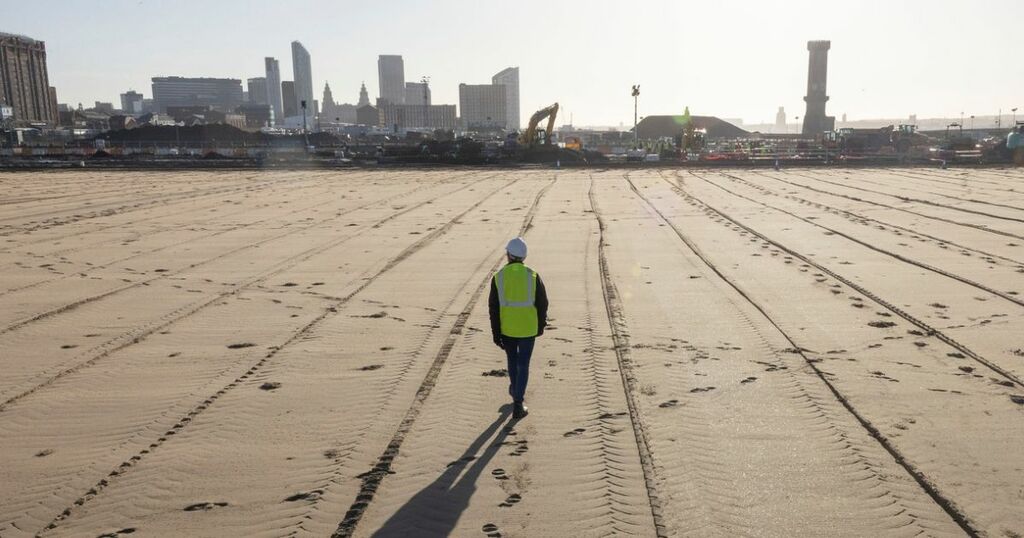 To some in the city, or to other football fans, having the opportunity to step onto the newly-compacted sand at Bramley-Moore Dock might not feel like much.

In the middle of a building site, awash with activity and bustling with people and construction vehicles - it might seem like just another project in an area of Liverpool prime for regeneration.

But for Evertonians, there's a real sense of awe about it.

Having seen countless images, videos, CGI fly-throughs, drone footage and everything else under the sun at Bramley-Moore Dock - there's nothing quite like donning a hard hat and hi-vis jacket, and stepping out into the Blues' new home for the first time.

The first thing that hits you is the real scale of what Everton are building on the site.

Pictures and videos don't do it justice.

The site is absolutely massive, even just taking in how big the fan plaza will be towards the entrance.

Taking the few minutes to walk into the middle of the sand, where an imposing body of water was positioned only a few short months ago, grants you the best views of what is a historic site.

The North Stand shows the foundation work well underway, with your eye particularly being drawn to the winter sunlight bouncing off the first above-ground foundations in the north-west corner of Bramley-Moore Dock.

Constant, thumping vibrations in the floor prompt you to turn around to the South Stand's location to see one vehicle continuing to compact the sand that has infilled the dock.

No wonder scaffolding was placed around the listed hydraulic tower on the north-east side of the side, because that compacting process clearly carries some power.

A bit further inside the site, the piling process continues - which will eventually see 2,500 piles spread across the entire site to prepare for the foundations to be laid.

Looking further in the distance from where you're standing gives a beautiful view of the city, with the Liver Buildings prominent among everything else.

Looking across in that direction will be even better when the stand is built, of course, with a huge viewing window set to be installed at the back of the single-tier South Stand.

Casting your eyes to the right would usually grant you a view of the river, but at the minute there is a huge mound of sand in place, around the location of where the stepped plaza will eventually be.

Meanwhile, to the left is the future location of the fan plaza - currently taken up by the offices used by those who are working day-in, day-out to make this project as exciting as it is.

Standing in the centre of Bramley-Moore Dock really gives a true scale of what Everton are embarking on, and what the club has already achieved in just a few months since beginning enabling works in July.

In a unique position where the new 52,888-seater stadium will eventually rise up, the history that's taking place all around you is awe-inspiring.

Of course this isn't an opportunity that will befall many Everton fans over the course of the coming months and years up until the ground is officially open, which is certainly unfortunate.

As things stand, much of the work on the site so far has been ground-level or even below-ground, meaning there has been a lot to see yet for anyone walking past that high wall along Regent Road.

Thankfully, in the latter half of 2022, that's expected to change as the super-structure rises up from the newly-infilled dock.

But that's getting ahead of ourselves. What is happening at the site right now?

Having completed the first above-ground work on the foundations before Christmas, the club have continued to lay the steelwork and the concrete around where the North Stand will eventually be.

Sand is continuing to be compacted and is currently being tested in multiple areas to make sure that all of the residual moisture has been removed.

Then, the area where water once stood will be prime for the piling process that has occurred all around it - with the pre-cast elements of the stadium façade ready to be transported to the site and installed.

Everton are at full-steam ahead with their proposals at Bramley-Moore Dock once again as things stand after what was a two-week break for many of those who have been hard at work.

Alix Craig, stadium development and project manager, told the ECHO: "There was a two week break during Christmas but it didn't feel like it, it feels like we didn't stop at all!

"The team have come back and cracked straight back on again. The piling and the ground work is continuing now that areas of the site become available.

"As the piling work finishes, those pre-cast elements will be brought in as-and-when they're ready to be installed on the site. Then you'll be able to see the structure of our stadium take shape.

"It's so exciting, when you're down here and in the detail it's easy to forget all the work that's gone on before and all the engagement we've had with the people of Liverpool.

"It's crazy to think, the scale of it when you're here...to imagine it on a matchday when it's full of Evertonians. The atmosphere will be amazing."

Until then, fans might have to wait patiently to see the new stadium grow above the dock walls.

But the excitement is rightly palpable. Everton have achieved so much in just a few months of works at the site.