The wait was finally over and the latest series of Strictly Come Dancing finally burst back onto our screens. The brand new 20th series of the BBC dance contest launched on Friday night (September 23) bringing glitter, glamour and glorious dancing to homes across the nation once more.

Fans welcomed back our hosts Tess Daly and Claudia Winkleman, along with judges, Craig Revel Horwood, Motsi Mabuse, Shirley Ballas and Anton Du Beke to the much-loved programme which will be filling out Saturday night's right up until Christmas (yes, we said it!)

As well as revealing who this year's 15 celebrities were paired with, the show opened with an eye-catching ballroom performance from the fabulous group of professional dancers which has increased in numbers this year. New pro dancers Lauren Oakley, Vito Coppola, Michelle Tsiakkas and Carlos Gu were finally introduced to viewers via a cinematic group number.

Not only that, John Legend also performed his new single ‘All She Wanna Do’ and at the end of the show, we saw the celebrities and professional dancers perform their first group number to finish the launch show in style, giving us our first sneak peek at the celebrities’ dancing skills.

Didn't get to see who's with who or want a reminder? Here is the full list of your Strictly Come Dancing couples for 2022:

Firstly, five-time Paralympic gold medalist, Ellie Simmonds was introduced to the dancefloor. When asked by Tess about what it meant to her to be representing people with dwarfism on Strictly, she said: "It means everything, to represent not just dwarfism but disability in general, for me to go out of my comfort zone and do something that I’ve never done before.

"Dancing is for all, yes, I’m going to have to adapt, I’m going to have to see what it’s like, but to be out there every Saturday night dancing… I’m so so proud." After being paired with her partner, Nikita Kuzmin, he shared his ambitions: "For me, the goal for this season is for Ellie to have the best time of her life!"

Next up was KISS FM DJ, Tyler West. When asked about whether his mum, a huge Strictly fan, was pleased with who he’d be partnered with, he answered: "Oh absolutely! I don’t actually think she’s come here tonight to see me; she’s come to see her!" We then saw him paired with his partner, Dianne Buswell, who quickly suggested the team moniker, 'Team TyeDie'.

Actress and presenter Kym Marsh was next to join Tess on the dancefloor. She admitted she knew all the Strictly professionals well due to them frequently appearing on BBC show Morning Live, which she presents alongside Strictly alumn Gethin Jones.

Kym, 46, was then paired with her professional dance partner, Graziano Di Prima, which was actually revealed on the Morning Live set. Both were ecstatic with Kym admitting: "My stomach was churning, but I was delighted!"

Will Mellor and Nancy XU

Up next we saw actor, Will Mellor, who revealed he had an unexpected connection to dancer-turned-judge Anton. "I’ve seen Anton about because he lives near the same village as me, I saw him at the tip," he shared as Anton admitted: "We love the tip! It’s so cleansing, my favourite place in the world!"

After being partnered with professional dancer, Nancy Xu, he told Claudia how he thought they were perfectly paired. "We match well… I’m like an excitable puppy and so’s she," he commented.s

Presenter Helen Skelton was up next and was asked by Tess how she felt about facing Craig Revel Horwood. Helen responded: "I’ve got three little kids so I don’t think there’s any tantrum you can throw at me that I haven’t already seen."

When asked what was important for her in a dance partner the 39-year-old said: "They need to be fun, patient, they probably need to be good with dogs and kids and understand a Northern accent!" She was therefore delighted to discover she was paired with professional dancer Gorka Márquez who is engaged to Bury's very own Gemma Atkinson

Tess was soon inviting EastEnders actor James Bye, onto the dancefloor. When asked about his nerves he said: "For me, coming into the unknown is what’s scary, I’ve got zero dance experience… and then I met my dance partner, and he/she was amazing and completely made me feel at ease."

After being paired with professional partner Amy Dowden he added: "I’m so relieved and I couldn’t be happier, I feel like the winner already!"

It was then the turn of singer and presenter, Fleur East. When asked how she will manage doing Strictly and her Hits Radio Breakfast show, she responded: "I’ve got six alarms that I set, because I snooze all of them. I’ll be up at 4.30am waking everyone up and then dancing at night!"

After it was revealed that Fleur had been paired with professional partner Vito Coppola, Claudia asked Vito what sort of teacher he is, to which he responded: "Behind this smile I’m very tough but I’m sure that she’s going to be alright because she’s a hard worker too!"

Next to take to the ballroom floor was wildlife expert and presenter, Hamza Yassin, who revealed top of his Strictly wish list is to get a 10 from Craig. After he was paired with professional dancer partner Jowita Przystal she expressed her excitement, saying: "He is just fearless, I can see that, which is very helpful for me! He’s strong and he’s also patient, that’s really important. So, I just cannot wait to go and start rehearsals!"

80s music legend Matt Goss was then up and admitted he was ready to embrace being ‘strictyfied’, stating: "I want to be rolled in sequins and glitter!"

Next up fans saw Tess welcome comedian and actor, Ellie Taylor, onto the show. Ellie admitted she was a show-off but caveated: "I like showing off at things I can do, this is awful!"

Asked about her wish list for a partner she said: "It was Johannes, Johannes or Johannes!" She was therefore utterly thrilled when her professional dance partner was indeed revealed to be Johannes Radebe. Johannes said: "I’m really chuffed to be partnered with Ellie, meeting her has been joyous and to see her excited about the season ahead makes me excited!"

We then saw CBBC’s Molly Rainford meet her professional dance partner, Carlos Gu. A delighted Molly said: "I can’t wait to get dancing and get learning some stuff, I feel like it’s going to be electric!"

She did however reveal to Claudia that she’s not sure where her dad’s loyalty lies when it comes to voting. "Obviously he’s going to have to vote for me but if it was his choice, he’s a football fan, Tony Adams might get his vote," she said.

Next up was Radio 2 host Richie Anderson, who admitted he had specific requirements for his partner, saying: "As the great 80s philosopher Sinitta said, 'he’s got to be big and strong and enough to'… whirl me around the dance floor!"

Richie was paired with his professional dance partner, reigning champ Giovanni Pernice, in the BBC Radio 2 Breakfast Show studio, exclaiming: "Could you get anyone better than Mr Giovanni? I feel like I’m the envy of the British public right now!" Giovanni was also pleased saying: "He’s got A LOT of energy, I’m very very happy!"

Up next was comedian and actor, Jayde Adams, who revealed that she is a Strictly superfan. After being asked if the show is living up to expectations so far she said: "I feel like it’s not real, I feel like someone made a Strictly themed birthday party and I’m in the middle of it!"

She then was paired with professional dancer Karen Hauer. Jayde was delighted, saying: "Karen IS Strictly," as was Karen, who said: "I’m absolutely excited, I have so many ideas, too many ideas, this is going to be a golden moment for me."

Thepenultimate celebrity to meet their professional partner was former England and Arsenal player, Tony Adams. When asked what he was looking for in a partner he revealed: "I want someone that’s talented, that’s a winner!"

His wishes came true as he went to the pitch at Highbury Stadium, where he was paired with Katya Jones. Katya told him: "We’re going to tackle some dancing, we’re a team now, we’ll work together."

And last, but by no means least, was Loose Women star Kaye Adams who admitted she’d never done anything like this before, saying: "This is like walking to the North Pole in flip-flops for me!" She also told Craig: "I’m your early Christmas present, I’m the turkey with all the trimmings!"

We then saw her paired with professional dancer, Kai Widdrington, with a delighted Kaye later saying: "Can I just say to Mrs Widdrington, you have done an amazing job with this guy, he’s such a lovely man, he really is, I’m so happy to be with Kai!"

Strictly Come Dancing continues on Saturday, September 24, at 6.45pm on BBC One and BBC iPlayer. 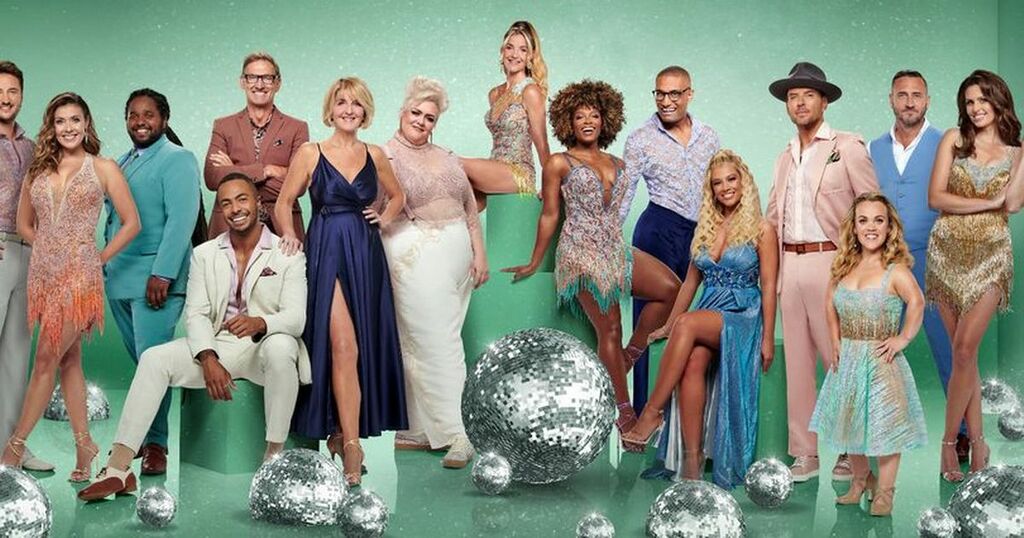 Strictly Come Dancing 2022: Full list of pairings and professionals without partners
Singers, soap stars and comedians are among the line-up this year and here is who they are coupled with

Pairings between celebs and their professional dance partners were confirmed on the launch show on Friday.

Jayde Adams will be competing with a female pro

Strictly Come Dancing 2022 is finally here, and the couple have been announced in full - with stars including Helen…