Bayeux War Correspondents Awards: a tribute to the people of forgotten conflicts 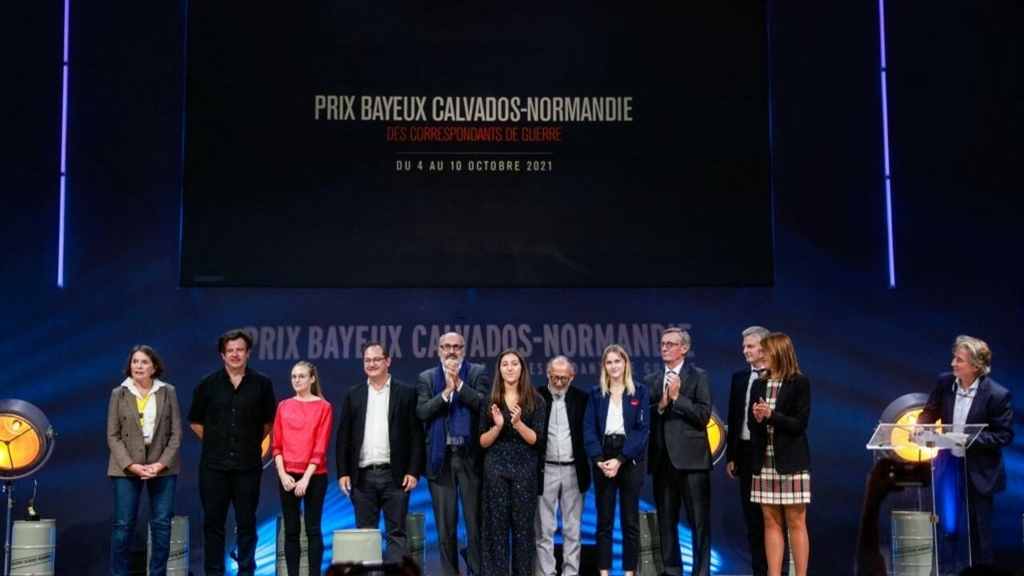 Energy and emotion were running high at the ceremony for the Bayeux Calvados-Normandy Awards for War Correspondents on Saturday evening. From the Balkans, to Myanmar, Afghanistan to Yemen, the winning reports all shared a message: let us not turn a blind eye to the atrocities in the world, but let us also rejoice in the rare moments of solidarity and hope.

The Jury for the Bayeux Calvados-Normandy Awards, now in its 28th year, no doubt had a difficult time selecting the ten winners in the categories of written press, television, radio and photography. There were dozens of quality reports in the running.

The courage of war reporters was praised throughout the evening. Indeed, you could conclude from watching extracts of the entries that they were all winners in their own right.

The first prize announced was for the Young Reporter in the written press category. It went to Thomas D’Istria for his report "Révolution dans la dernière dictature d’Europe" published in French daily Le Monde. Revolution in Europe’s last dictatorship takes us into the heart of Belarus, where a crackdown on opposition to leader Alexander Lukashenko continues.

We were reminded that danger is not confined to one place. Journalists who dare expose the truth risk their lives wherever they go, some obliged to mask their identities, or their whereabouts, even in a 'safe' country.

For the first time in 28 years, the Bayeux Jury awarded a prize to an anonymous recipient.

The Photo Award went to a photographer in Myanmar for the collection of photos known as the La révolution du printemps (Spring Revolution) published in the New York Times.

The winner was in the audience, hidden in the shadows, unable to bask in the accolades for fear of attracting unwanted attention.

At what point does the journalist stop being an observer and become part of the story they are recording? The case in Myanmar illustrated this in stark terms, and the journalist was willing to exchange a few words about this.

The protests that followed what were widely believed to be rigged elections changed every aspect of this journalist’s life. There is no going back.

The danger is even more present now that the protesters are no longer en masse in the streets. There is no longer safety in numbers. While their anger has not abated and resistance is still vocal, reporters can no longer roam the streets.

And there are times when the work of a reporters becomes unbearable. Seeing a young girl crying over the death of her father in the street, forced the photographer in Myanmar to put down the camera and turn away.

A human face to the horror

And there was plenty of emotion at Bayeux, especially with regards to countries where people’s plight appears to be forgotten.

The first prize in the television Category (short format) went to journalists Orla Guerin and Goktay Koraltan for their report "Les tireurs d’élite au Yémen" (Snipers in Yemen) screened by the BBC. Their harrowing look at children killed by snipers in Taiz as they play in the street was a cry from the heart.

In her recorded video acceptance speech, Orla Guerin said that she was "grateful" that her story brought Yemen back into the spotlight, and it was important to put "faces on the horror" in a war which has dragged on for six long years. This film also won the Regional Prize for Students and Trainees.

Another journalist, who also won two prizes, was also unable to pick up his prize, but for different reasons.

The shadow of the Taliban

Wolfgang Bauer won both the Written Press prize and the Honorary Ouest-France Jean Marin Prize for his report "Among Taliban", published in the German Zeit Magazin.

A translated extract was read aloud, and then the audience heard a recorded video message in which he explained he couldn’t be there because he was helping Afghan families settle into his home town – those he helped evacuate when the Taliban took over Kabul in August. One of his fixers was shot dead.

Afghanistan appeared again as the focus of the winning radio report by Margaux Benn, for Europe 1.

Her documentary "À Kandahar, des villages entiers sont devenus terrains minés" (In Kandahar, entire villages have become minefields) was played in full – the sounds of children and families and men whose lives have been destroyed by landmines.

This year’s Grand Format Television Trophy went to Damir Sagolj and Danis Tanovic, for their documentary "When we were Them" (Al Jazeera Balkans). They filmed migrants stuck in no-man’s land in Bihac, Bosnia-Herzegovina, desperately trying to cross the border into Europe and to what they hoped would be freedom and a new life. This raw, yet poetic, account of life in limbo was also awarded Best Video Image.

Education is key for future

Every moment of the ceremony brought forth powerful moments, history in the making through the eyes of journalists of different ages and nationalities.

There was a reminder of how important it is to train the next generation of journalists, a point underlined by Manoocher Deghati, president of the jury.

Be it through educational projects in France or abroad, or in solidarity with journalists who have fled conflicts and need help getting set up in a new place, the world needs eyes and ears around the globe now more than ever to keep informing the public, despite the dangers.

Regardless of the zone in which journalists happen to be working, it is clear that the same patterns keep re-emerging. Humans are violent, cruel and greedy and yet in all the reports, there are signs of solidarity, sometimes moments of joy, and hope for peace.