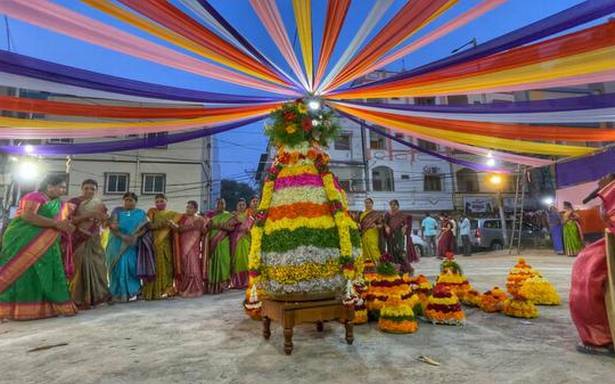 Days to go before the Saddula Bathukamma, the sounds of uyyala songs in all their variations rent the air.

In Kukatpally, sandwiched between the Anjaneya Swamy temple and old houses with tiled roofs, women started walking in with their flower arrangements at 6 p.m. in the area known as Bathukamma Ground.

As a senior citizen sat down on a chair and took the mike to sing Bathukamma songs from memory, the number of intricately arranged bouquets of flowers in the centre of the circle kept on increasing. Women dressed in festive finery with their sparkling gems and shimmering jewellery stepped out of SUVs with their flower arrangement before joining the troupe to clap, strike a rhythm with their feet and move in a circle.

By 6.30 p.m., a police official stepped in and created another circle with flowers at the centre for the women to whirl, clap and sing. The traffic passing through the road had to be stopped. “This is nothing. There used to be more people coming here to play Bathukamma. Now, other colonies are organising their own events, that’s why this one is not very crowded,” said Vijayalakshmi who has been residing in the lane leading to the Bathukamma arena for the past 20 years.

While Bathukamma has been celebrated with much vim and vigour after Telangana state was carved out in 2014, COVID-19 put a stop to the celebrations last year. But the easing of lockdown, rise in vaccination rates and dip in COVID cases has seen a lowering of guard. It was difficult to find evidence of mask mandate.

Another family wheeled in a six-feet towering flower arrangement on a cycle rickshaw. But unlike the paper and plastic flower decorations parked in street corners in the city, the flower arrangements harked back to Telangana culture with tangedu (Cassia auriculate), marigolds and chrysanthemums taking the pride of place.