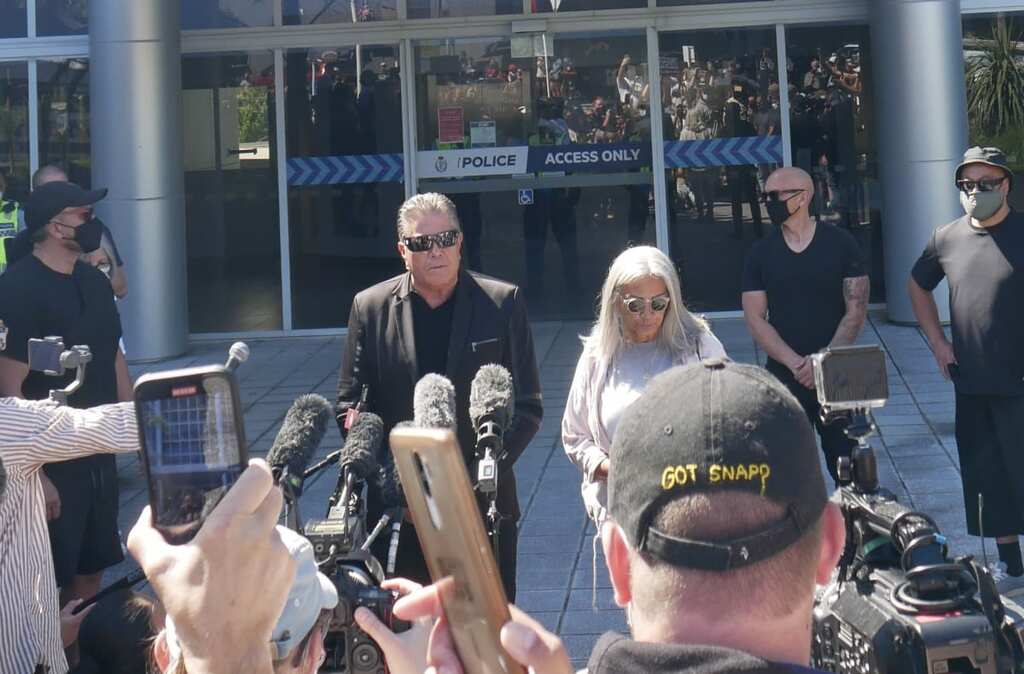 Destiny Church leader Brian Tamaki appeared outside Auckland Central Police Station on Tuesday and spoke to an impassioned crowd, before going inside to face the music

Update: Tamaki appeared in the Auckland District Court late on Tuesday and was remanded on bail, again, with conditions that he not breach public health orders, doesn't encourage others to do so, and keeps away from the Auckland Domain.

A small but passionate congregation were awaiting the arrival of Destiny Church leader Brian Tamaki at Auckland Central Police Station on Tuesday morning, after he and wife Hannah Tamaki were summoned to appear after attending a protest against lockdowns and vaccine mandates over the weekend.

A number of protests in the Auckland Domain have led to charges against alleged organisers of breaching the health order, with Tamaki’s own conditions of bail preventing him from attending any more protests.

But after ‘National Compassion Day’ on Saturday, where Tamaki made a surprise appearance at the Domain alongside his wife, and accused Prime Minister Jacinda Ardern of “criminal acts” in front of an enraptured crowd, police have once more issued a summons for the controversial preacher.

A crowd of several hundred cheered as the Tamakis stepped out from the back of a black SUV, before the Bishop took the chance to speak to his flock.

Eyes hidden by his signature pair of sunnies, Tamaki stressed he had been following the rules and was “basically innocent”.

“I’m going out of my way to keep all of these rules,” he said. “I kept to all of their Covid requirements.”

It seemed there were some technical difficulties with the mic for the first few minutes of his speech, meaning the Bishop’s message was competing with the call-and-response of followers in the front row calling out platitudes such as ‘Tell ‘em, Apostle!’, but after somebody managed to get his voice on the speakers, Tamaki spoke for a good 10 minutes.

Tamaki called on the lively crowd to take a stand against lockdowns and vaccine mandates - while also adding that he hadn’t encouraged people to break Covid restrictions.

“If you don’t do something about it today, then what sort of future have our children got?” he asked his flock.

Tamaki said he was not worried about going to prison, comparing potential time in a cell to life in Auckland in the latter half of 2021. “I’ve already been in jail, it’s called Auckland prison.”

This is the second time Tamaki has been pinged for breaching bail conditions for appearing at a protest, after he was charged for the same thing last month - where Judge Josephine Bouchier warned him that another breach could lead to remand in custody.

Despite the prior warning, Tamaki expressed surprise at having to make an appearance at the police station, saying police were “doggedly targeting” him.

There was a distinctly patriotic vein running through some of the signs and flags carried by Tamaki’s supporters, with New Zealand flags and slogans referencing the national anthem on site.

Alongside these were messages with a more specific agenda - such as a banner calling for the removal of “Auckland boarders” (sic) and the perplexing “my truck identifies as a Prius”.

Other signs showed support from the group Voices for Freedom, established by Advance NZ candidate and anti-lockdown activist Claire Deeks.

At the conclusion of his speech, members of the crowd performed the Ka Mate haka - despite condemnation last week from Ngāti Toa, who insisted protesters stop using their taonga.

“We do not support their position and we do not want our tupuna or our iwi associated with their messages,” Pou Tikanga Dr Taku Parai said in a statement.

Nevertheless, Tamaki was seen off with a rousing rendition of the famous haka.

With his high-profile dealings with the law and an endlessly loyal group of followers, the self-appointed bishop has featured prominently in media coverage of anti-lockdown protests and marches.

But he’s not the only figure behind a pulpit convincing his congregation to attend protests and breach the health order, with religious leaders such as Peter Mortlock from City Impact Church telling his followers that sooner or later they will have to take a stand as freedoms are stripped away.

But it is Tamaki who ends up standing outside police stations, filling an almost martyr-like role in the eyes of his followers - ready to submit to having his fingerprints taken, to freely walk into the cop shop and offer up his own freedom - possibly just for a few hours.

Speaking before going into police custody will lend any speech a new flavour of gravitas - as the country found out when Vinny Eastwood’s calls for his followers to please surround and protect him as police approached went viral in August.

And Tamaki has never been afraid of hyperbole, as shown last year when he announced to his Sunday service that Covid-19 was a sign that humanity had “strayed from God”.

A statement from police superintendent Shanan Gray just before noon said a 63-year-old man - presumably Tamaki - had been charged with failing to comply with the Covid-19 health order and breaching bail conditions.

He is set to appear before the Auckland District Court this afternoon via video link.

“Police cannot rule out further arrests being made in relation to this event,” said Gray.