Barnaby Joyce, Nationals and Coalition flayed for Australia's lack of climate change policy by Labor and Independents on Q+A 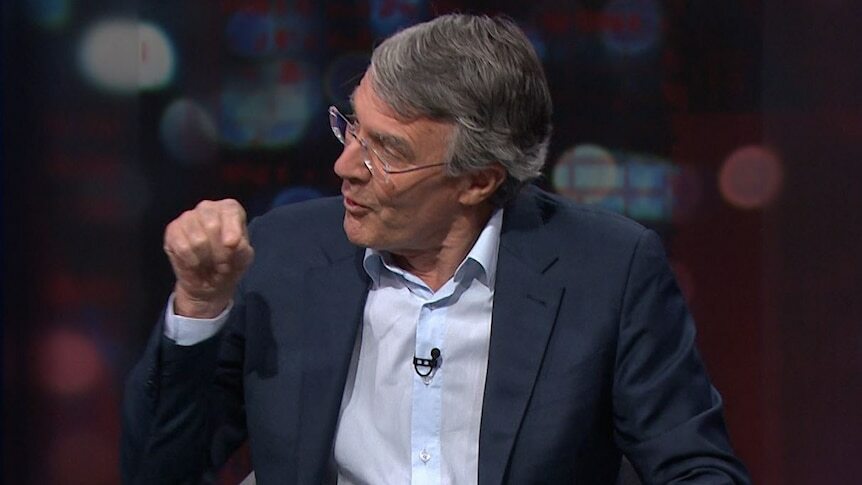 The federal government has been excoriated on Q+A by Labor and cross bench MPs for not having a climate policy that gets the nation to net zero emissions by the year 2050.

The Morrison government was labelled a "rabble" by Shadow Attorney-General Mark Dreyfus during a withering attack over a lack of action on climate change.

The question came ahead of the UN's climate change conference in Scotland, an event Prime Minister Scott Morrison has yet to commit to attending.

"The plan to get emissions down is a very complex agenda because you've got to decarbonise electricity, you have to decarbonise industry and transport and you also have to look to agriculture," he said.

"What you'll see over the next few weeks is an agenda to decarbonise those three things with a target to get to net zero in a particular year and I think it's important that as part of that agenda there is a clear checkpoint along the way in 2030."

Asked what that should be, Senator Bragg said: "Forty per cent. I think that is quite achievable [and] would be a reasonable target for us to show the rest of the world we are serious about getting to net zero."

Mr Dreyfus was not placated.

"This is a rabble of a government," he said.

"We have been waiting eight years for a government to have a proper policy on climate.

"We have had 21 polices, all of them abandoned and we're now waiting on the 22nd."

Mr Dreyfus then accused Deputy Prime Minister Barnaby Joyce and the Nationals of holding the Coalition and Australia to ransom.

"Federal Cabinet met yesterday but no-one is prepared to talk about what was discussed or even maybe decided because we're waiting until the National Party meet on Sunday.

"I find this absurd.

"We had the pre-COP in Milan two weeks ago; Australia didn't say anything at the pre-COP because we didn't have a policy.

"This rabble of a government have not got a policy and they have let Australia down big time."

Q+A host Virginia Trioli reminded him that federal Labor have not been perfect on climate change policy either, with Member for Hunter Joel Fitzgibbon at odds with his party on several climate policies.

Independent member for Indi, Helen Haines, also went on the attack against the National party.

"Fundamentally, the government have not had a plan," Ms Haines said.

"There's a closed door secret deal being done at the moment with the National Party and the Liberal Party.

"The National Farmers' Federation committed to zero net emissions by 2050 years ago.

"The meat and livestock association have committed to carbon neutrality by 2030.

"We have the dairy farmers in my electorate sending me their plan for climate action.

"Every large renewable project is in the regions, but are the profits coming back to the regions?

"No. Because there hasn't been a plan from the National Party, they're too busy looking backwards and looking for things that have happened years ago."

Ordinary Australians want to know what the plan is

Ms Roffey, fresh from a breakthrough premiership for the Melbourne Demons in the AFL, said she wanted to see plans from all sides of government on what a change to net zero and energy policies would mean for the average Australian.

She called for strategies to be made public so Australians could see the costs associated with change, rather than political slanging matches over who is or isn't doing the right thing.

"On behalf of everyone who consumes out there, could we please actually see some strategy on where our next forms of reliable, renewable and most importantly affordable energy is actually going to come from?" Ms Roffey asked.

"There's a lot of talk about who did the wrong thing and which policy we should have, but there isn't enough talk about we're closing down our coal-powered plants... but what are we replacing them with?

"Saying, 'pop solar on the roof of your house' is not an option for them.

"I want to see more of this talk about realistically how are we going to transition to this space to support everyone who deserves to have heating in their house in Australia, to have access to reliable and affordable renewable forms of energy."

The rough night for the Coalition continued with questions about why there was still no independent commission against corruption (ICAC) at a federal level, despite promises made by the Morrison government to implement one.

Senator Bragg said he was for an ICAC at the federal level if it was the right model.

"I think that an anti-corruption commission is a good idea," Senator Bragg said.

"I wouldn't call it a Federal ICAC, it would be about dealing with serious corruption issues.

"I've been attracted to the Victorian model, which I think does a lot of good work in the background and it can use coercive powers.

"That would be a very appropriate thing for us to have in Canberra."

Ms Haines had drafted a bill for a Federal ICAC, but Senator Bragg said the government had a plan in the works and that independents don't legislate.

Ms Haines said to get her bill voted on she needed some Coalition Senators to support it, but conceded that might be unlikely.

"The bill I have presented to the House, the government had no desire whatsoever to debate it," Ms Haines said.

"All we have seen is a draft plan from the government, no legislation.

"My bill has been judged by transparency international when they looked at all the integrity commissions around Australia, anti-corruption bodies, as being best practice."

Ms Haines then suggested that a national anti-corruption commission should be taken out of the hands of the big parties to "deliver the nation something they truly want".

Watch the full episode on iview or via the Q+A Facebook page.