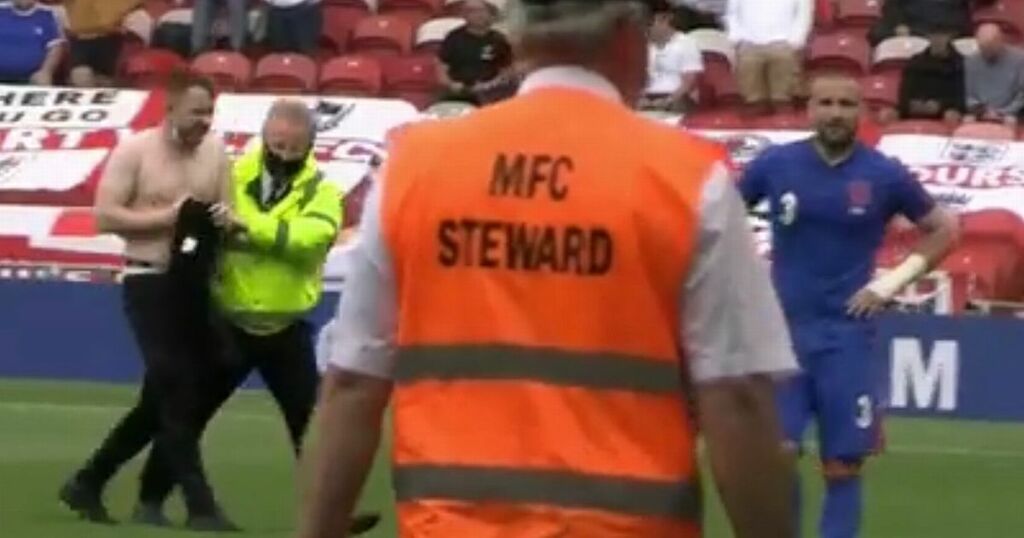 A bare-chested football yob who ran onto the pitch after downing seven pints during an England match has been given a football banning order.

Bailey Cassidy downed pints after pint at the Riverside Stadium before jumping over the barrier and running across the halfway line.

He then removed his t-shirt and “waved it around his head”.

The 23-year-old interrupted the European Championship warm-up game that saw the Three Lions take on Romania in June of this year.

Cassidy has been a member of the England Supporters Association for 12 years, TeessideLive reports.

He made a “fool of himself” during the 17-second hooliganism at the Middlesborough ground.

Cassidy, from Suffolk, he was convicted at Teesside Magistrates’ Court for going into the playing area at a football match “without lawful authority or lawful excuse”.

He was brought back before the Middlesbrough court on Tuesday as police sought a football banning order.

The court was told how the offence was committed on June 6.

Ms Butt told how a police officer who was deployed inside the ground at 5.40pm for an incident during the first-half of the game.

Cassidy had climbed over the barriers and ran onto the pitch when the players were still playing.

Cassidy "ran away from police officers" and was chased by a match steward.

Ms Butt described how he then removed his t-shirt and "waved it around his head" as fans chanted in the background.

When caught, Cassidy was taken to the North-west corner of the pitch where his eyes were "glazed", he "smelt of alcohol" and his speech was "slow".

Cassidy went on to give another man’s name when asked by police, and claimed he was from Manchester.

He later confirmed his real name and was arrested.

During interview, Cassidy admitted he had drank seven pints and admitted to his actions.

When asked by officers if his actions may have led to violence or disorder, he replied: "Maybe more."

Ms Butt applied for a minimum three year football banning order with a requirement that Cassidy does not enter the parish, city or town boundary eight hours before or after any England men's games.

The court heard how Cassidy was "on the pitch for 17 seconds" and his actions were a "one off event".

Mr Tismond told how it was Cassidy's first opportunity to attend a football match with his father as he had been undergoing chemotherapy.

However, Cassidy "drank far too much".

He was "exceptionally drunk" and made a "fool of himself".

Mr Tismond added that Cassidy was "petrified" at the prospect of receiving a football banning order.

District Judge Marie Mallon outlined that there are "reasonable grounds" to make the order as Cassidy "went onto the playing area during play" and "crossed the halfway line".

She added that the incident was "severely exacerbated" by the covid-19 pandemic as many players had formed bubbles and isolated in preparation for the game.

The district judge made the football banning order for three years which will prevent Cassidy, of Roman Way, Heverhill, Suffolk, from causing disruption to England matches.

On any day when the England senior men's national team are playing a fixture within England, Wales or Scotland the defendant must not enter the town, city or parish boundary wherein that fixture is being played, during the period eight hours before until eight hours after the scheduled kick off time.