Ronald Koeman has described Lionel Messi’s Barcelona departure as “still hard to understand” as the Nou Camp club prepare to officially bid farewell to the superstar on Sunday.

It was announced on Thursday the six-time Ballon d’Or winner would not sign a new contract with his boyhood club, with president Joan Laporta saying a day later that the former regime at Barca in addition to LaLiga spending rules had thwarted any hopes of the Argentinian staying in Catalonia.

Messi, who has been heavily linked with a move to Paris St Germain, had been set to remain at the Nou Camp but is now a free agent and the 34-year-old will hold a press conference on Sunday at 11am BST.

Reflecting on the shock news that Messi will be leaving, Barca boss Koeman said on Twitter: “Still hard to understand that you will not play for FC Barcelona anymore.

“Thanks for everything you have done for our club Leo. I really enjoyed the full season we worked together.

“I am impressed with your work ethic and desire to win. It makes you the best player in the world. For now, I wish you and your family the best!”

During a press conference held by club president Laporta on Friday, he insisted his predecessors had left a “terrible inheritance” with club salaries claimed to be running at 110 per cent of income when he took over in March.

He also said LaLiga’s strict squad wage cap rules meant there was no way to do a deal, with Messi’s two-decade stay at Barcelona coming to an end despite an expectation in July that the Argentina captain had agreed a new contract.

Numerous tributes have been paid with now former team-mate Frenkie De Jong writing on Instagram: “It has been a dream for me to play with the best player in history, I enjoyed every minute on and off the field of play.

“Now I will continue to enjoy your magic but again like when I started, in front of the television. Thanks for everything, Leo.”

Cesc Fabregas came through Barcelona’s famed La Masia academy with Messi and played with the forward in the Barca first team between 2011 and 2014 after he returned from Arsenal.

The Monaco midfielder posted a lengthy message on Twitter, it read: “I will always remember the day you came to the dressing room when I was 13 years old and they told us that a boy from Argentina was coming to try.

“You sat down and didn’t speak the whole time. The coach told me in the 1v1 exercise to be strong against you, I saw you so small, that I thought in a second I would take it away from you.

“Silly of me, you left me on the floor and from then on I saw that you were something different. My dream was always to play for the Barca first team, but doing it with you and Geri (Gerald Pique) always made that dream much more special.

“In the end, it became a reality and just for the mere fact of feeling football as I felt it playing false 9 with you and seeing the connection that there was, it was all worth it. You go the best player of all time. It will never be the same to see Barca without you.”

After 778 appearances and a staggering 672 goals, Messi will move on from Barcelona with 10 league titles, four Champions League crowns and three Club World Cups among his haul of 35 trophies.

PSG are leading the chase for his signature, with the Ligue 1 outfit confident they can complete the transfer within a week.

Boss Mauricio Pochettino is said to have received a call from Messi on Thursday which convinced the hierarchy at the Paris club to pursue a deal despite initial concerns due to financial grounds.

PSG begin their domestic campaign on Saturday away to Troyes with Argentina internationals Angel Di Maria, Leandro Paredes and Mauro Icardi already at the club along with Messi’s old Barca team-mate Neymar. 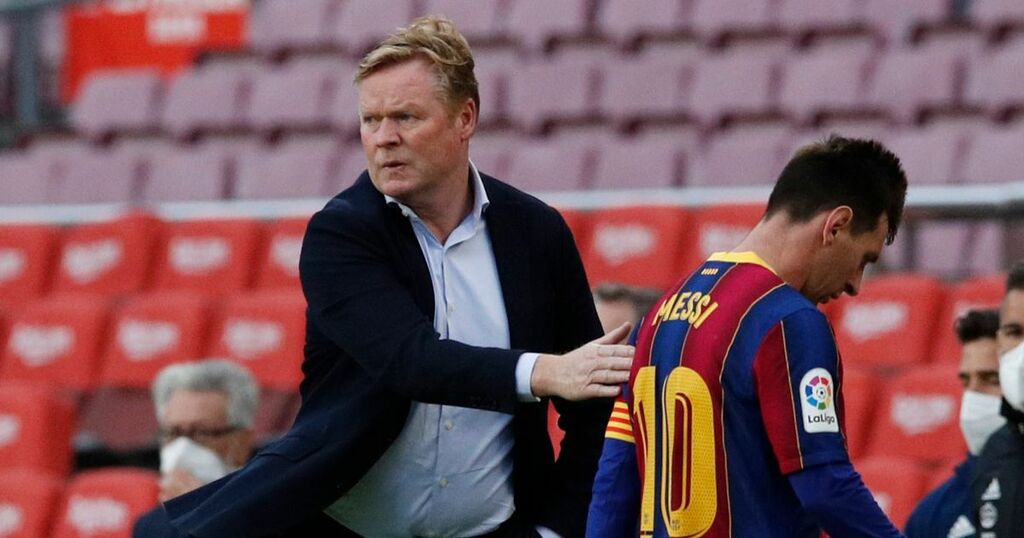 Daily Mirror
From analysis to the latest developments in health, read the most diverse news in one place.
Ronald Koeman's message to Barcelona fans as players jeered after Lionel Messi farewell