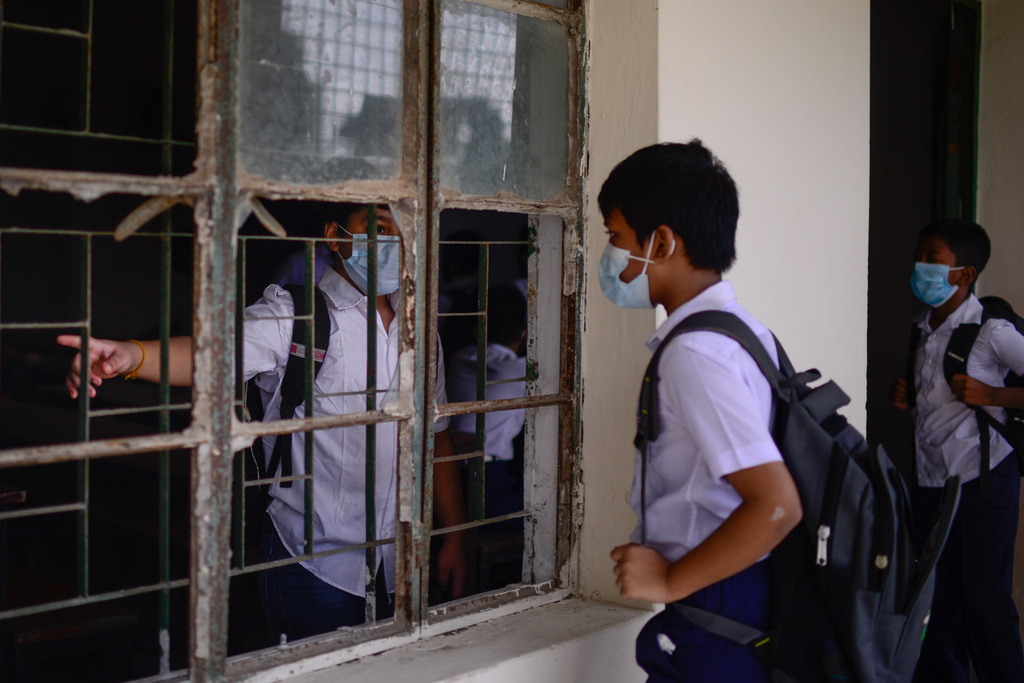 Dhaka, Bangladesh – For the first time in 18 months, Adnan Hasan finds himself wearing his school uniform – a crisp white shirt and blue pants – and standing in a queue.

The fifth-grader, wearing a mask, waited before the arched gate of capital Dhaka’s Udayan School on Sunday, as hundreds of thousands of children in Bangladesh returned to their classrooms after 543 days – one of the world’s longest coronavirus shutdowns.

As children waited to enter Udayan School, two workers stood at the gate, dispensing hand sanitiser to those entering, while the other checked their temperatures with a thermometer.

The last time Hasan passed through this gate in March last year, he was not standing in a queue nor was his temperature checked. They also did not need to wear a mask.

But the pandemic changed everything, forcing millions of children like him across the world to stay home.

In a report last week, UNICEF warned that prolonged school closures during the COVID crisis accentuated “alarming inequities” for more than 430 million children in South Asia.

“School closures in South Asia have forced hundreds of millions of children and their teachers to transition to remote learning in a region with low connectivity and device affordability,” UNICEF’s regional director, George Laryea-Adjei, said in a statement.

“As a result, children have suffered enormous setbacks in their learning journey.”

Now that he was back in school, Hasan was ecstatic.

“I can’t describe in words how I am feeling getting back to my school,” he told Al Jazeera. “I am meeting all my friends after ages. It’s great.”

‘No alternative to in-person classes’

Like Hasan, thousands of students of primary and secondary schools across Bangladesh returned to their classes, some in Dhaka decorated with balloons and ribbons.

Many schools welcomed their students with candies and flowers as children hugged each other in excitement.

Education Minister Dipu Moni on Sunday warned against any lax enforcement of safety measures in the schools.

“The students of the first to fourth grades, and sixth to ninth grades, will attend classes once a week for an initial period of three weeks,” she said.

Moni said those who are scheduled to sit for public exams at the end of fifth, 10th and 12th grades will attend classes every day, adding that all other classes will resume gradually.

According to Bangladesh’s telecom operators’ association, only 41 percent of its 169 million population have smartphones, with students in rural districts suffering further due to a lack of high-speed internet.

A study conducted by the Bangladeshi NGO BRAC found out that about 56 percent of the country’s students were not connected with online or recorded classes during the pandemic.

“For these underprivileged students, there is no option but to attend in-person classes to get the lessons. So I believe the government has made a very good decision by reopening the schools,” educationist Syed Md Golam Faruk told Al Jazeera.

“Yes, there were online classes. We even got promoted to the next grade through our online exams. But there is no alternative to in-person classes,” Zarif Raihan, a student of Dhaka’s Monipur High School, told Al Jazeera.

Raihan said, “Things have changed a lot [since the pandemic], but the joy of being in the school premises remains the same.”

Bangladesh on Sunday recorded 51 deaths from COVID-19, taking the total death toll to 26,931. With 1,871 new infections recorded, the number of total infections is more than 1.5 million.

To reopen the schools, almost 97 percent of the country’s teachers and staff were vaccinated, according to the government.

The school authorities are also taking a number of precautionary measures.

Students have been instructed to ensure hygiene and maintain distance from their peers in classrooms. The benches that used to fit four-five students now host only two at most. They have also been barred from bringing any home-cooked food on the premises.

Syeda Akhter, the head at Dhaka’s Narinda Government High School, told Al Jazeera they have been strictly following the health guidelines and protocols issued by the government.

“We measure the temperature of each student at the school entrance. We also make sure that they wash or sanitise their hands. At the classroom, students are instructed to sit three feet apart to maintain social distance,” Akhter said.

Sheikh Sharok Ahmed, the head teacher of Mars Laboratory School in the capital, said they were allowing 50 percent attendance in the classroom.

“We are running four shifts instead of two regular shifts, so that all of the students can be accommodated,” he told Al Jazeera.

Ahmed said the coronavirus infection rate in the country is decreasing and hoped the schools will return to their normal states soon.

“The government mentioned a caveat that if infection rates rise, then the schools might face a shutdown again. But I am hoping the situation will get better,” he said.

The joy and enthusiasm of students and teachers, however, were in contrast to some parents who fear a hurried reopening may put their children at risk of contracting COVID-19.

“The infection rate has decreased if we compare with July or August when we witnessed the third wave of coronavirus. But COVID is still there and I am not feeling comfortable sending my children to school,” Mahbubul Haque, father of an eighth-grader, told Al Jazeera.

“Because of the school closure, our children were frustrated. They were all locked up inside homes and were getting addicted to their devices. This school opening has come as a blessing for them,” she said.

Educationist Faruk also believes the reopening of schools will do more good than the fears of harm being expressed by the parents.

“The school closure in Bangladesh has been one of the longest in the world. There was no option before us but to open the schools, as prolonged closure during the pandemic worsened the inequalities for millions of children across Bangladesh,” he said.