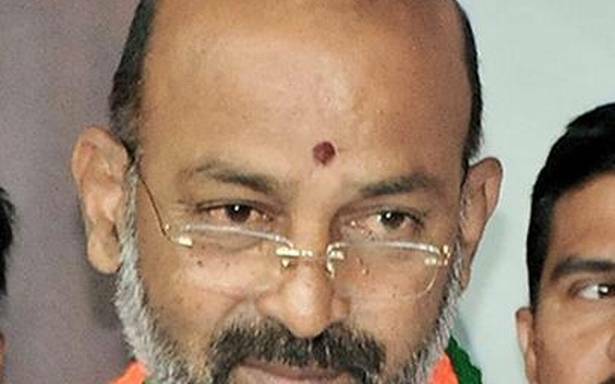 In an open letter to the Chief Minister, a copy of which was released to the media, he asked if the Chief Minister is ready to resign if he found that not even a single farmer had a meter fixed for the agriculture pump sets.

The BJP leader charged Mr. Chandrashekar Rao of not fulfilling the promises given to the farmers but “resorting to cheap politics and gimmicks” in making “baseless charges’‘ against the Centre on its agriculture policies.

At a time when farmers, employees and teachers are agitating against GO 317 zonal transfers, lack of job notifications for two lakh vacancies and so on, the CM’s latest missive against the Centre is only meant to “divert the people’s attention and misled them,” he maintained. “This is also to cover up the fact that the Centre is getting ready to take action against Mr. Chandrasekhar Rao’s corruption in various projects like Kaleshwaram, Mission Bhagiratha, Palamuru-Rangareddy and others,” he claimed.

Admitting that fertilizer prices had increased, he claimed the Centre has been delivering the products at old rates only whereas, the TRS government had promised free urea in April 2017 but had done nothing since then. Similarly, crop insurance scheme and soil testing were not taken up. Apart from Rythu Bandhu other schemes have been frozen. The Chief Minister never attended the Bankers Meeting or the Crop Plan meeting which exposes his involvement in farmers issues, he said. The Centre is committed to doubling farmers income and has already taken steps as per the Swaminathan Committee by enhancing the minimum support price often, making it applicable for 23 crops, doubling or more in the last seven years, explained Mr. Sanjay Kumar.

In Telangana alone, it has spent ₹85,000 crore for procurement ever since the NDA government came to power bearing expenditure for the entire process, including gunny bags, labour, transport and so on, yet the government here had “inordinately delayed” the procurement, and farmers dues are to the tune of ₹2,626 crore. Other States have been giving bonuses of ₹200 to ₹600 per quintal but not a single penny from the government here, he said.

The CM should explain why farmers are continuing to commit suicide with TS having the dubious distinction of being fourth in the country on that count. Free urea, one lakh loan waiver uniformly, bonus of 500 for every quintal to every crop, soil testing across the State, subsidy for mechanisation, crop insurance scheme, subsidies for poly houses, drip irrigation and so on are among the other demands he put forth to the CM.

“We will wait till Telugu New Year of Ugadi for the government to initiate steps or will take up a massive agitation,” he warned in his communication.