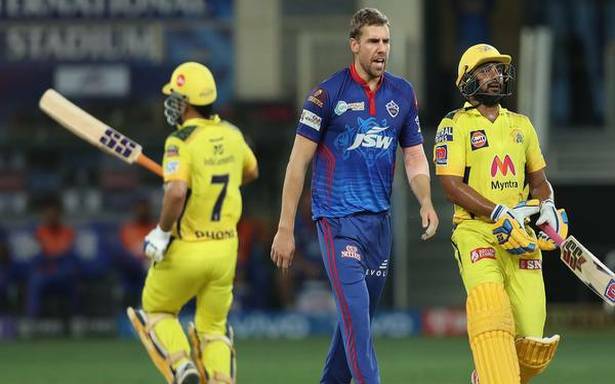 Chennai Super Kings will take on Delhi Capitals in Dubai in Qualifier 1 of IPL 2021 on Sunday. DC got the better of CSK in both of their meetings during the league stage.

The winner of this match will directly qualify for the final. The loser meets the winner of the Eliminator between Royal Challengers Bangalore and Kolkata Knight Riders.

CSK comes into the match on the back of three successive losses, the last one a crushing defeat against Punjab Kings at the same venue. That loss showed that CSK bowlers struggle in flat conditions. However, they would hope to be better informed about what to do when batters attack them.

The top order has been one of the big reasons for CSK’s turnaround this year. Faf du Plessis and Ruturaj Gaikwad set the tone for their entire innings, and CSK would want more of the same.

Gaikwad, in red-hot form otherwise, has been dismissed cheaply in the last two games. He hit a short ball from Anrich Nortje straight to mid-wicket the last time these two sides met. Gaikwad can expect another severe examination from the DC quicks.

Against Punjab, M.S. Dhoni threatened to break free before being bamboozled by a Ravi Bishnoi wrong ’un. Dhoni should consider sending the in-form Ravindra Jadeja ahead of him, regardless of the situation.

Work on its fielding

DC, on the other hand, needs to work on its fielding. Glenn Maxwell was dropped twice in the same over which dented DC's chances against RCB in the last match. Kagiso Rabada's form at the death this season is a concern as well. He has gone at 10.84 runs per over in the death overs and picked up just four wickets.

DC skipper Rishabh Pant also needs to come up with a way of utilising R. Ashwin better. Against RCB, a team with a clutch of right-hand batters, Ashwin bowled just one over.

CSK is likely to have a similar make-up should Robin Uthappa play ahead of Suresh Raina. But it will still have two left-handers in the playing XI — Moeen Ali at the top and Ravindra Jadeja in the lower middle order. DC needs to get more out of its premier off-spinner. How Ashwin is used could have a bearing on the outcome of the match.