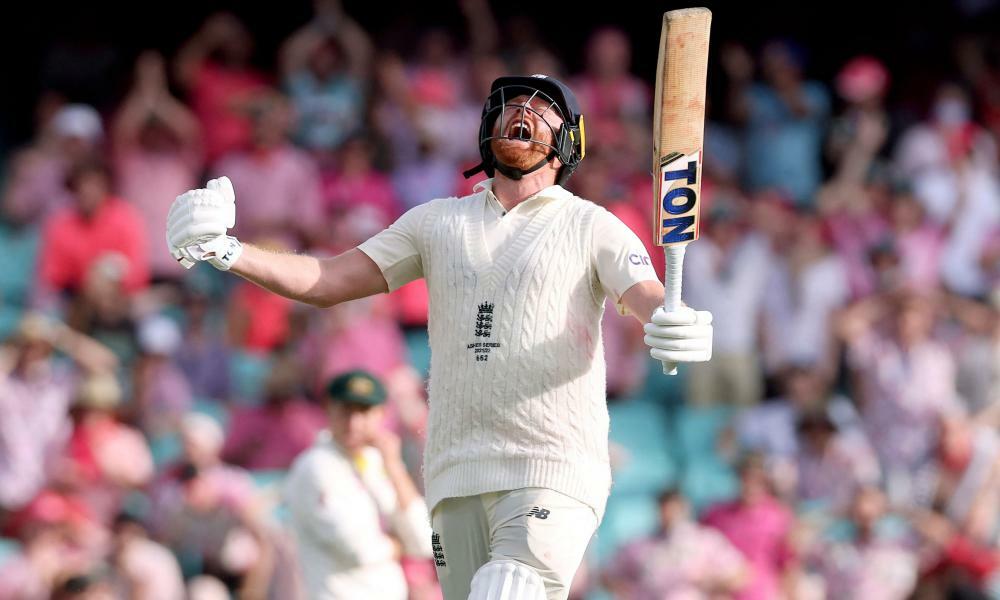 The Ashes are settled and the contest barely flickered en route but none of the 28,000 spectators who watched Jonny Bairstow’s unbeaten century cap a raucous, freewheeling third day in Sydney could claim to have been short-changed. Finally the smattering of England supporters among them had something to savour too.

It came moments before stumps – not quite Steve Waugh’s last-ball century here in 2003 but close enough – as Bairstow, on 99, stepped to leg and carved the fourth ball of Pat Cummins’ final over beyond backward point and to the rope. It was the seventh inof his Test career, but also a first in three years of increasing frustration, and the Yorkshireman’s guttural roar in the direction of his teammates in the old pavilion was a moment of pure catharsis.

As the two sets of players made their way off the field, the cold ones waiting for them in the eskies inside were very much well-earned. Over the course of 65 overs, once morning rain relented, they had delivered a memorable display of punch and counterpunch on what was an increasingly capricious pitch. Some 245 runs were scored, seven wickets fell, seven sixes landed in the crowd and three catches went down. Throw in the sight of batters regularly being struck on hand or body and a remarkable slice of fortune for Ben Stokes, and it made for rollicking fun.

Crucially for England, who closed on 258 for seven in reply to Australia’s 416 for eight declared, the follow-on had been swerved in a match with further bad weather forecast. Given they sat at 36 for four at lunch, the top order once again evaporating in meek fashion as Australia swarmed, this was no mean feat either, with Stokes initially kickstarting the fightback in a fifth-wicket stand of 128 alongside Bairstow. As they walked off for tea after a wicketless afternoon session of 99, a fiery exchange of words with a subsequently ejected supporter said plenty about their mindset.

England’s two redheads both battled through the pain barrier too. Stokes grimaced with every boundary struck during a 91-ball 66 due to the side strain he suffered on day two, his treatment of Mitchell Starc particularly disdainful. And shortly after the all-rounder’s demise post-tea, pinned lbw on the back foot by the otherwise manhandled Nathan Lyon, Bairstow required strapping and a couple of magic beans from the physio following a nasty blow to the right thumb from Cummins that looked worse with every replay.

Jos Buttler came and went for a duck, his largely sorry series rolling on when he chipped Cummins to a smartly placed short cover. But Bairstow found an ally in Mark Wood and was even happy to play second fiddle as the No 8 crashed a 41-ball 39 during which he cleared the rope three times and his smile was broad. This was Bairstow’s day, however, his tightened defence providing a platform from which to deliver the best of his white-ball repertoire. Like Usman Khawaja’s emotional century 24 hours earlier, it prompted thoughts of what could have been but also raised a few as to what might yet follow.

If there was a sliding doors moment to all this chaos, it came shortly after lunch when Stokes, already put down by Cummins on nine, was given out lbw to Cameron Green when shouldering arms on 16 in frankly bizarre fashion. Stokes did not hesitate to review and burst out laughing when the replays showed that the ball had in fact glanced his off-stump without dislodging the bail. Paul Reiffel, the on-field umpire, was seeing things.

Thoughts of promoting this defiant stump to open the batting in England’s second innings swirled in light of a bleak morning for the tourists. Australia surged impressively, the ball zipping around under the floodlights and the surface was already throwing up nasty rising shock balls; par-boiled to the tune of 134 overs in the field over the previous two days, England’s batters were suddenly back on the hotplate.

Quite where Haseeb Hameed goes after his latest single-figure score remains to be seen, although forward would be a start. The right-hander has retreated into his crease over the course of this series, inviting Australia’s seamers to go fuller and fuller. And though a reprieve came in the third over of the day thanks to Alex Carey’s latest mix-up with first slip, Starc soon exploited this, and a yawning gate, to rearrange his stumps.

The early strike meant England fell one run short of their best opening partnership of the series – 23 runs at the Gabba – and Zak Crawley similarly could not cash in on good fortune. Bowled off a no-ball the previous evening, Crawley survived a sharp chance at short-leg on seven and unfurled a couple of assertive retorts, only for Scott Boland to replace Starc at the Randwick End, dry up the runs and beat an ambitious drive.

This was the start of a relentless spell of pressure in tandem with Green that delivered 53 dot balls before lunch and the wickets of Joe Root and Dawid Malan. Root played the shot of a drained captain, fencing Boland to slip for a duck – making it eight wickets for seven runs for the right-armer going back to his remarkable final day in Melbourne – while Malan, shaken by a blow to the gloves, tickled Green to leg slip on three.

The suffocation rolled on after lunch, with 11 maidens chalked up either side of the interval before a Stokes single finally set England free and began a show of defiance alongside Bairstow which, while coming too late to change the destiny of the series, made for a welcome change to the narrative, nonetheless.