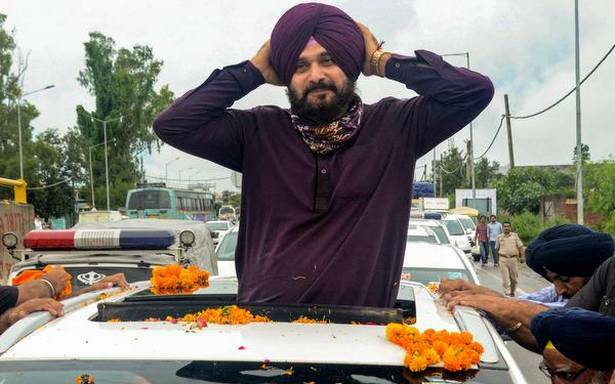 Punjab Congress chief Navjot Singh Sidhu on Wednesday attacked the Badals, accusing them of laying the foundation of the Centre’s farm laws over which farmers are protesting for the past several months.

The Congress leader alleged that one of the Centre’s laws is a "photostat copy" of the Punjab Contract Farming Act, 2013 enacted during the previous SAD-BJP government led by Parkash Singh Badal.

The Amritsar MLA also claimed that the Badals initially supported the central laws and then took a U-turn after facing heat from farmers.

"It is with conviction and clarity that I say that the Badals laid the foundation of the Centre's three black laws," said Mr. Sidhu addressing his first press conference after assuming the charge of the Punjab Pradesh Congress Committee.

Mr. Sidhu said former CM Parkash Singh Badal had tabled a bill on contract farming in the Punjab Assembly in 2013 and later it was enacted as the Punjab Contract Farming Act.

The Punjab law is the "soul" while the Centre's three "black laws" are the "body", he said.

Mr. Sidhu claimed that the Punjab's law never talked about the minimum support price and it allowed corporates to buy crop below it in order to exploit farmers.

As many as 108 crops, including wheat and paddy, were brought under the law, he said.

In case of a dispute, the bureaucracy was given the power to settle it under the Punjab Contract Farming Act, he said, adding that farmers were barred from approaching the court.

Mr. Sidhu also compared some of the provisions of the Punjab law with the Centre's Farmers’ (Empowerment and Protection) Agreement on Price Assurance and Farm Services Act, 2020, saying it is a "photostat copy" of the state law.

He said there was no MSP guarantee in both laws, which mention dispute settlement by bureaucracy, bar on jurisdiction of the civil court, amount recovered as land revenue, period of agreement and registration authority.

He said as per these two laws, it was the corporate who would decide farm services and they could also procure crop directly from fields that could kill the APMC mandis.

Subdivisional magistrates were given protection and no farmer could file any suit under these two laws, he said.

According to the Punjab law, if a farmer makes any default, he could be sentenced to one-month in jail and forced to pay a fine ranging from ₹ 5,000 to ₹ 5 lakh, he said.

These laws were framed only to benefit the corporates, Mr. Sidhu alleged.

The cricketer-turned-politician slammed the Badals for first backing the Centre's three farm laws and then taking a U-turn after criticism from farmers.