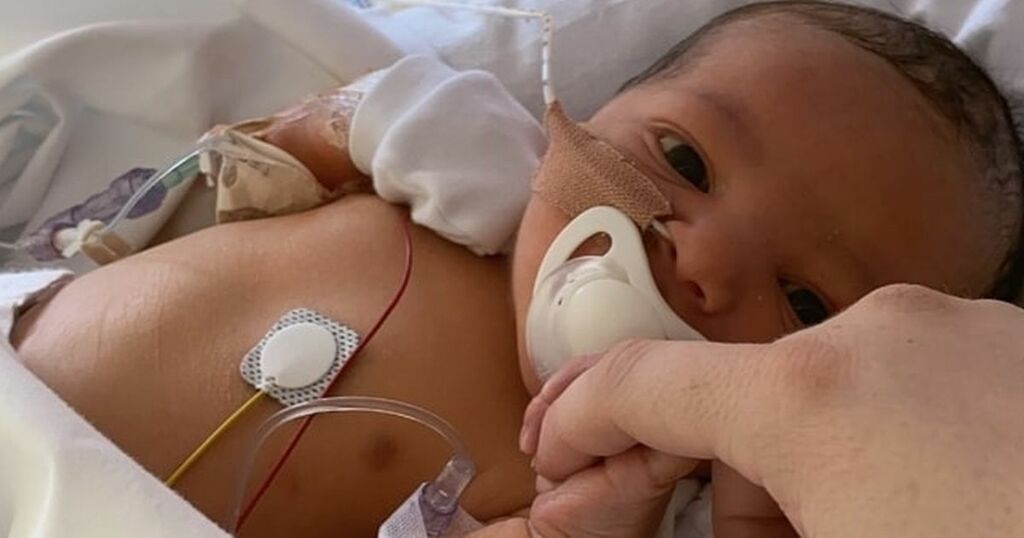 A mum has told of how she feared for her baby after his stomach ballooned up hours after giving birth.

Baby Micah started vomiting when he was less than a day old, having not been feeding in the hours he'd been alive, reported the Liverpool Echo.

The newborn boy was discharged from hospital and sent to the family's home in Wirral, Merseyside, with a feeding plan.

But mum Kayleigh, 34, said things "went downhill from there".

A midwife visited and decided to send the baby to Arrowe Park Hospital where doctors tried to feed him.

Kayleigh told the Liverpool Echo : "When we got him to Arrowe Park, we got him to take about 20ml of a feed, and that was what tipped him over the edge basically, that little, tiny couple of mils.

"It hit his tummy and his belly just swelled significantly. It went really big and hard."

Kayleigh was "shocked and scared", wondering what was happening with her baby while doctors examined Micah and tubes ran through his nose to his stomach.

She said: "It was quite frightening. I'd never experienced anything like it before.

"As a parent who's already had children, you take for granted that your baby is going to be born okay.

"That just wasn't the case for Micah.

You can quite easily, your pregnancy goes swimmingly, there's been nothing detected that anything is wrong with the baby, your labour goes fine.

"And you expect to go home and everything be hunky dory and you get to spend time with the rest of your family.

"Our other children just didn't really get to see Micah. They were in school and he got rushed off to hospital."

Kayleigh added: "You have nine months of imagining. For me, that was the hard part at the beginning.

"You spend nine months imagining what life's going to be like when your baby is born.

"Micah didn't meet a lot of his family for quite some time because of being in hospital. He wasn't able to be around his siblings as much."

After being transferred to Alder Hey Children's Hospital and undergoing tests, Micah was diagnosed with Hirschsprung’s disease.

The congenital condition affecting one in 5,000 in the UK meant the nerves in his bowel didn't fully develop while in the womb.

Kayleigh's baby boy was kept at Alder Hey for two weeks, having a stoma formed in theatre before being sent home to his three older siblings.

The mum of four sings the hospital's praises for how the staff treated them during their initial stay and since.

Kayleigh said: "They're just fantastic, they really are. They're such an amazing team of people. We were blessed to have such really, really inspirational people taking care of our baby.

"They knew what they were doing."

And they taught Kayleigh what to do too, guiding her through how to clean the stoma bag and care for baby Micah.

Hirschsprung's disease is incurable but can be treated and his mum is grateful for Alder Hey's support.

She said: "They'll monitor him because they can be quite prone to having problems with their bowels as they get older.

"It's quite important to myself and dad and the siblings, to not only raise awareness for Alder Hey and how amazing they are, but also for Hirschprung's disease because it is so rare.

"When someone says, 'Oh why has he got that stoma bag?', you say he's got Hirschsprung’s disease and they don't actually know what it is.

"And there's such a stigma around having a stoma as well. Saturday just gone was Stoma Awareness Day.

"It's important to raise awareness that that's what saves our baby. That's been put there to help him. And that's what it's there for."