By Amrit Dhillon in New Delhi

Diwali has come early to the temple town of Ayodhya. Though the Hindu festival is three months away, the town has been lit up by earthen lamps for the laying of the foundation stone of a Hindu temple that ranks as perhaps the most emotionally intense, discordant, and divisive issue in Indian politics for decades.

Prime Minister Narendra Modi is scheduled to attend a ceremony in the town on Wednesday, when he will lay a 40kg silver brick at the construction site. He will be watched by priests chanting Vedic hymns, his party’s top brass and the good and great of Indian society.

The event is the first time Modi has visited Ayodhya. It marks the culmination of a sustained political campaign by his party, the Bharatiya Janata Party, for a temple to be built on the spot where a Hindu mob, watched by some BJP leaders, demolished a more than 400-year-old mosque in 1992 sparking riots that left almost 2,000 dead.

Since then, the issue has sparked riots, propelled the BJP to political power from the fringe where it used to languish, polarised Hindus and Muslims and, with its complex melange of history, religion, mythology, law, and emotion, dominated Indian political life.

For the BJP, it will be a moment of political triumph for its ideology of Hindu cultural nationalism.

For many ordinary Hindus, it will be a moment of simple pride – a temple being built for Lord Ram, the most revered god in the Hindu pantheon, at the spot where they believe he was born. Every Diwali, Hindus across the globe celebrate the return of Lord Ram to Ayodhya as the victory of good over evil.

But for Indian Muslims, the emotions are more ambivalent – lasting sorrow at the demolition of the mosque that once stood there, mixed with a resigned acceptance.

Muslim political leader Asaduddin Owaisi criticised Modi for attending the religious event, saying it was tantamount to violating the oath he took on India’s secular constitution and warning it would “open up wounds”.

Construction was approved by the supreme court in November, when it ruled that a temple could be built and land provided elsewhere for a new mosque, ending a protracted legal dispute.

“This is a day we have been waiting patiently for. My father and grandfather have dreamt of this temple. It will be a landmark monument in India and I hope it will bring millions of tourists to the city,” said Anil Awasthi, a taxi driver in Ayodhya.

The Uttar Pradesh town is getting the customary Potemkin facelift bestowed on all Indian towns when dignitaries are expected. Roads have been swept and hung with saffron flags and bunting. Buildings have been painted and brightly coloured murals depicting scenes from Ram’s life have come up on walls and home exteriors. Soil and water from various holy rivers and sacred sites have been brought in.

When it begins, the ceremony will be live-streamed so that Hindus across the country and members of the Indian diaspora can watch it.

But the timing of the ceremony, which comes as India is grappling with the pandemic and is currently the fifth worst affected country, has drawn criticism.

Others have pointed to what they call Modi’s “misplaced priorities” in holding the ceremony while battling Covid-19. Inside the complex, one priest and 15 policemen have tested positive for the virus.

The home ministry itself has banned all large gatherings and urged all Indians over 65 (Modi is 69 and many of the BJP leaders who will be present are even older) to stay at home as they are more vulnerable to the virus.

As for the guest list, though massively pruned because of Covid-19, it still includes at least 200 dignitaries. 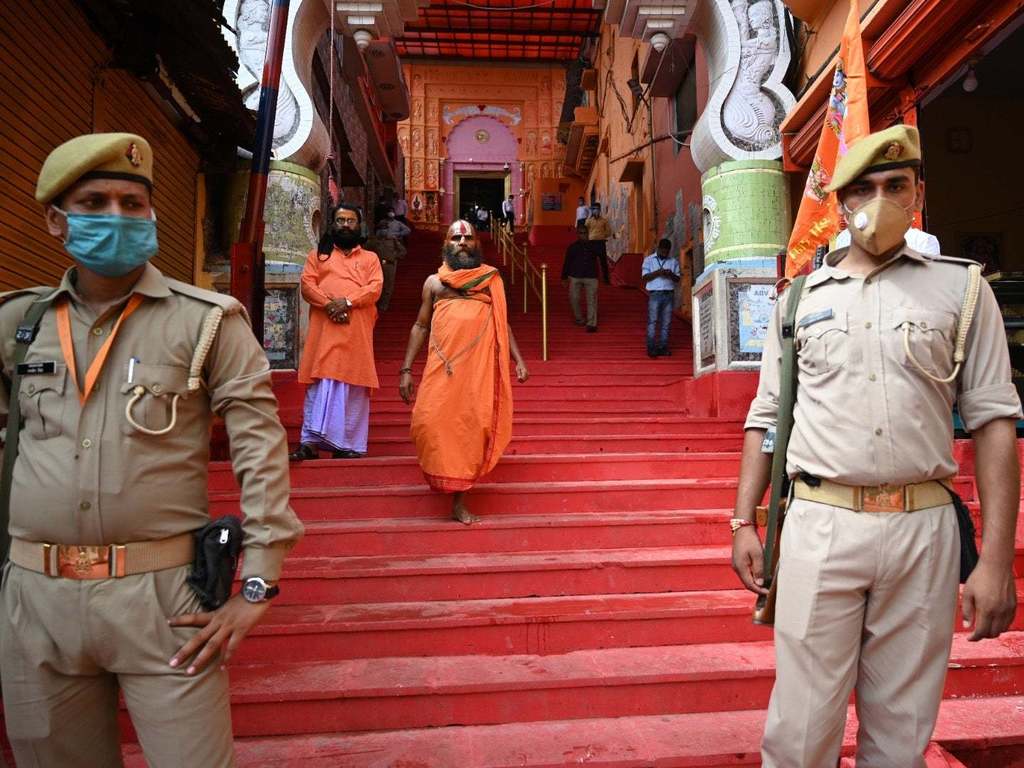