By Amrit Dhillon in New Delhi

The Indian town of Ayodhya welcomed Narendra Modi for a ceremony marking the start of construction of a temple on the site where a mosque was razed to the ground by a Hindu mob 28 years ago.

Modi’s Bharatiya Janata party has campaigned for years for the temple to be built at the spot considered to be the birthplace of the Hindu deity Lord Ram. The issue has divided Indians, alienated Muslims, helped propel the BJP to power and thrown its rivals into disarray.

Modi last visited Ayodhya in 1991. “When he came, he said he would only return to the city when work had begun on the temple, not before,” said Kameshwar Chaupal, a priest and member of the trust responsible for building the temple.

On Wednesday, Modi offered garlands and prayers to the deity to the sound of conch shells blown by priests in saffron robes.At the temple site a 40kg silver foundation stone was placed in the ground.

Calling it the “dawn of a new era”, Modi said: “India is emotional as decades of wait has ended. For years, our Ram Lalla [the infant Lord Ram] lived beneath a tent; now he will reside in a grand temple.”

The temple construction is a political and religious milestone for Modi and the BJP. Following a sustained campaign, the party received the go-ahead for the temple last November from the supreme court, which said land should be found elsewhere for a new mosque.

The BJP has succeeded in turning the controversial issue of whether the temple should be built into a touchstone of Hindu identity, a marker of the Hindu nationalism that forms part of its core ideology known as Hindutva.

“It is an undoubted victory for Modi. He fancies himself to be a greater icon of Hindutva than the actual temple,” said Parsa Venkateshwar Rao Jr, a political analyst.

Prominent Muslims have said the community was resigned to the decision but fear it could embolden Hindu nationalists to target two other mosques in the state of Uttar Pradesh.

“The Modi government should assure Muslims that Hindu outfits will not ask for the construction of temples in Varanasi and Mathura after demolishing existing mosques there,” said Iqbal Ansari, the main Muslim litigant in the supreme court case, who now supports building the temple in Ayodhya.

Zafaryab Jilani, the general secretary of the All India Muslim Personal Law Board, a lawyer who was also involved in the legal dispute, said that while Muslims had to accept the law of the land, it was wrong of Modi to attend the ground-breaking ceremony.

“It is against the letter and spirit of India’s secular constitution for the prime minister in his official capacity to attend such a religious event. It shows a woeful and total disregard for the principles of the constitution,” said Jilani.

For Modi’s political opponents, the start of the temple construction has presented them with a quandary. They dare not challenge the celebrations and festivities for fear of alienating many of their fellow Hindus and appearing out of step with majority sentiment. Yet they remain nervous at the BJP’s success in conflating religious conviction with political ambition.

“When politicians hail the building of the Ram temple, they choose to ignore that it is being built on the debris of mutual accommodation and represents an unprecedented homogenisation of Hinduness,” wrote Suhas Palshikar, a political scientist, in the Indian Express.

“In this sense, the past one year and more has been the period of ‘no contest’ in India’s politics. If the BJP is guilty of dismantling the republic, all other parties are silent approvers.”

The temple will have five domes, clusters of columns, and will reach a height of 50 metres. It is expected to be finished before the 2024 general election. 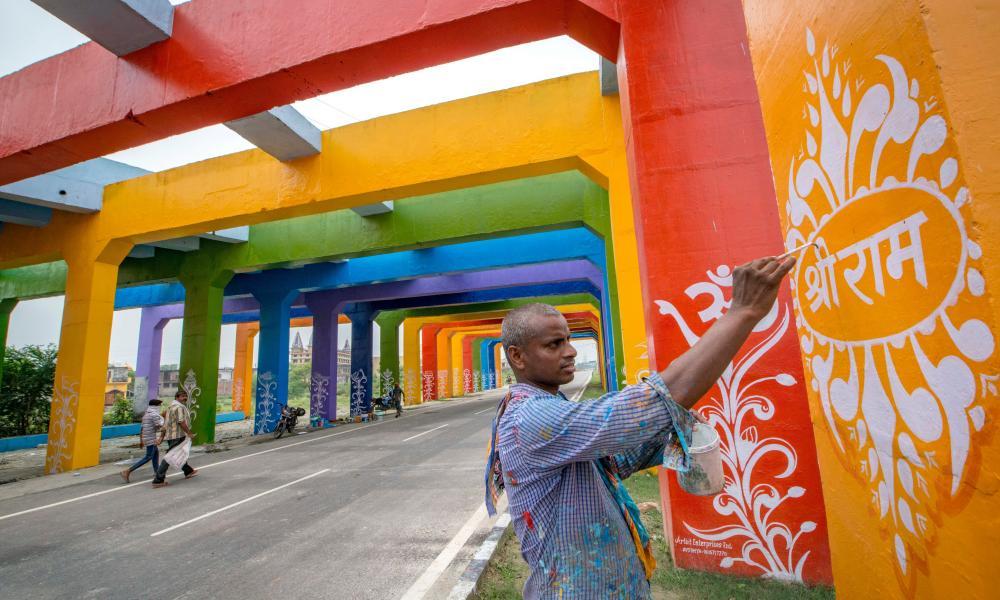 Twenty eight years after the demolition of the centuries-old mosque by a Hindu mob, India's Prime Minister Narendra Modi formally…